July was black in 1983 and in other years too 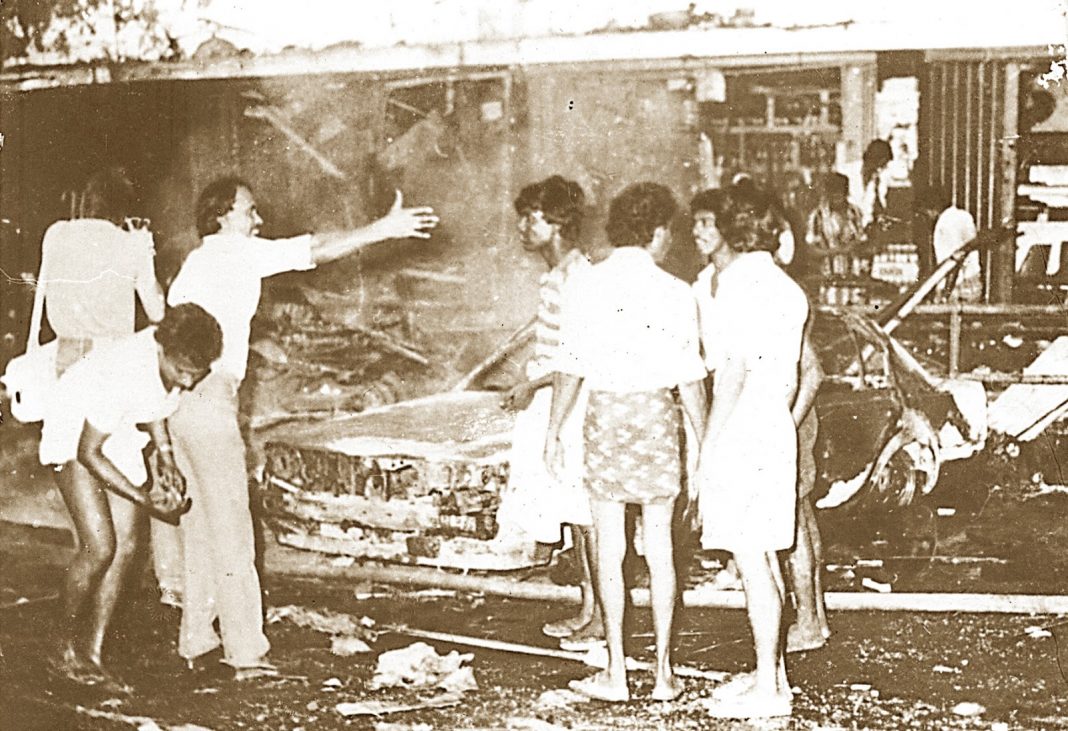 Last week The Nation commented on the events of July 1983, referring inter alia, to the context and how it helped shape the larger tragedy that unfolded.  July 1983, referred to as ‘Black July’ has been politicized to the point where the victims have receded into a statistical figure, a rhetorician’s convenience to be debated about, to be manipulated for political ends.  Inevitable, one might say.

It was black, that July.

There were other Julys that followed, in many ways as or more tragic, as or more violent, as or more dark, but strangely forgotten.   On July 24, 1996 was a black day.  The Dehiwala train bombing.  Sixty four is less than 300+, but death is death, the loved ones of the victims would not have wept less.  No commemoration, though. No ‘Never Again!’

There was a July in 2001. Katunayake.  Twenty four aircraft were damaged or destroyed in an audacious LTTE attack which had a tremendous and negative impact on the economy. It paved the way for ‘regime-change’ and the Ceasefire Agreement on February 22, 2002, the ill-effects of which, including the massive loss of lives, are well documented.  Unremembered.  No ‘Never Again!’ And if only numbers matted, we had a July in 1990. Thousands were killed in that month by vigilante groups who did the bidding of the then Government.  If July 1983 was black, then a darker color to describe the July of 1990 is yet to be named.  No commemoration.  No ‘Never Again!’

Blackness is about the horror of the moment, true.  But ‘black’ is a color that can be used considering effect.  In this sense, the July that came in 1987 is as black as any other.  This was the July of the Indo-Lanka Accord, whose (il)legality, Indian machinations embedded in background construction and text, violation by the principal architect (India) and other ‘thereafters’ are excellently detailed in an article by Dimuth Gunawardena titled ‘Indo-Lanka Accord a nullity’ (see page 11). No commemoration. No tears; none for the 60,000 who were slaughtered in the insurrectionary thrust spawned by the Indo-Lanka Accord.  No ‘Never Again!’  Instead there are shrill cries for ‘full implementation’.  There’s also the Oliver Twistian ‘More, I want more!’ And there is the shameless sycophancy of those who caution, ‘India might bark and bite!’

July 1987 was the blackest month for Sri Lanka in terms of what happened to national dignity, sovereignty, territorial integrity and so on.  An unnecessary war that had already cost much in terms of lives lost was given what turned out to be a further 22 years to live.  It took a strong and determined political leadership to put that baby to rest, yielding as ‘price’ a regime which in after-conflict glory acquired a half-sanctioned and half-wrested ‘do as we please’ complexion. The dead cannot be brought back to life.  They will be mourned by those who they left behind.  They will be the plaything of the rhetorician.  Little can be done to stop that.  The relevant ‘blacknesses’ will not lose hue until time covers event and buries memory with other tragedies and/or the consecration of a resolve to ‘move on’, either by grievance-redress or acquisition of better sense or the counting of blessings.

The blackness of July 1987, however, can be dealt with. Decisively.  The LTTE is no more.  A different avatar of that monster can of course be birthed by the marriage of communalism.  An ’83 can recur.  The blackness of July 1987 is a ready platform for the full flowering of both kinds of blackness, for the monumental lies that underpin the Indo-Lanka Accord and the abiding nature of the signature it crafted on the political landscape.  A cancer if ever there was one.  It requires removal.  One less ‘blackness’ in these dark times is certainly welcome, after all.