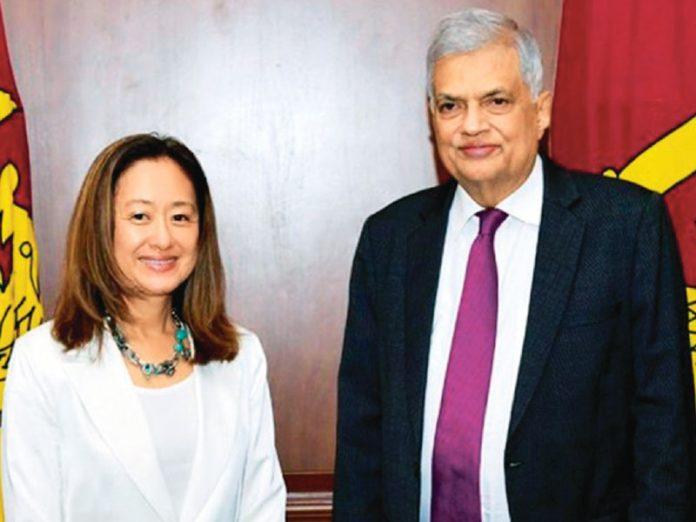 Diplomats from the West, based in Sri Lanka, have a nasty habit of commenting ceaselessly on internal affairs. In the most condescending tone, advice is meted out via social media channels to both the people and Government of Sri Lanka. The newly appointed US Ambassador Julie Chung is playing the lead role in this endeavour.

Her tweets imply that Sri Lankans lack the wit to manage their own affairs. For instance, on the day the Presidential Secretariat, the first office in State Affairs, was freed from illegal occupation on 22 July 2022, she tweeted, “Deeply concerned about actions taken against protestors at Galle Face in the middle of the night. We urge restraint by authorities and immediate access to medical attention for those injured.”

That very day, the new President of Sri Lanka, Ranil Wickremesinghe called the diplomats for a meeting. The President first briefed them on the joint operation by the Security Forces to free the Presidential Secretariat (and not the “Galle Face”) that took place in the early hours of that morning (and not “middle of the night,” as Ambassador Chung erroneously claimed).

He also explained the need that arose for the Security Forces to get involved. The illegal occupiers were dictating their own terms instead of vacating the premises as informed by the relevant authorities. Lawbreakers cannot be allowed to decide the terms of vacating the premises, as it is the people who must comply with the authorities and especially Court issued directives and not vice versa.

The Presidential Secretariat is not some museum junk, but the office of the Executive President of Sri Lanka. It is in this office complex that the President conducts all his business, including meeting dignitaries.

Yet, due to the anti-Government protests, the functions of this office were disrupted for 100 days. Former President Gotabaya Rajapaksa was forced to conduct his affairs from the President’s official residence, which was clearly designed for other purposes.

With the collapsing economy, the new President has much on his plate. He thus obviously needs his Office to conduct his business, which includes taking vital and timely decisions to arrest any further deterioration of the economy. After all, the lives and livelihoods of 22 million are at stake.

At this meeting with the diplomats, the President also raised a point that has been upsetting a majority of Sri Lankans. This was over the messages that some of these senior diplomats post on social media. Especially on Twitter, ambassadors post instructions to the people and castigations to the Government – all dressed up as concerns for citizens’ fundamental rights and advocates of democracy. Acts of anarchy are defended and justified as components of a “strong democracy.”

This kind of intrusive comments amount to interference in the internal matters of a sovereign nation. Such acts are frowned upon by the very protocol that a diplomat is expected to adhere to.

A diplomat, especially an Ambassador or a High Commissioner, is a representative of another Government. Therefore, their messages that are published in official channels can only be the communication from their respective Governments. This commentary is thus an unwarranted interference on an independent, sovereign nation by another.

As President Wickremesinghe pointed out at this meeting, broadcasting opinions based on the half-baked, misconstrued messages picked from social media threads harm this country’s image. This damage is ill-affordable, especially at a time when Sri Lanka is in need of other nations’ goodwill. The President hence directed the diplomats to the proper procedure of verifying facts from the relevant authorities before forming their professional opinion.

This is a welcome change from Sri Lanka’s usual ostrich policy. It could not have escaped these ambassadors, who claim to be “closely watching” and “monitoring” Sri Lanka’s situation, that this meeting changed the perception people had of President Wickremesinghe.

His forthrightness has inspired confidence among the very voters who stood against him. The applause the President received should be a measurement of the antagonism nursed by the general public against these diplomats’ interferences.

Any other would have been embarrassed if their unprofessionalism was thus exposed. The very fact that the host Government had to remind them of the proper procedures and the need for responsible conduct would have shamed anyone with a sense of decency.

Yet, Chung’s tweet after meeting the President reads, “Just met w/ President @RW_UNP to express my grave concern over the unnecessary and deeply troubling escalation of violence against protesters overnight.

The President and Cabinet have an opportunity and an obligation to respond to the calls of Sri Lankans for a better future.

This is not the time to crack down on citizens, but instead to look ahead at the immediate and tangible steps the Government can take to regain the trust of the people, restore stability, and rebuild the economy.”

The gap between the impression created by these tweets and the actual events that took place is noteworthy. When the tweet begins with “Just met w/ President @RW_UNP to express my grave concern…”, the illusion is that the Ambassador met the Head of State on her own initiative, when in reality she along with her peers were called for a meeting with the President. As such, she did not set the agenda, but was set for her by the Sri Lankan Government.

In her lengthy message (in the context of a tweet), she failed to note the President’s concerns over unsubstantiated comments propagated by certain diplomats and their failure to follow due procedure in verifying facts. As such, her tweet does not offer any apology for possible past misjudgement committed or assurance against future occurrences of such misdemeanours.

Instead, she continues to comment on the same lines as before, telling the Sri Lankan Government that “this is not the time to crack down on citizens.” She then outlined the action plan the Government must take, which is to take “immediate and tangible steps the Government can take to regain the trust of the people, restore stability, and rebuild the economy.”

It is obviously lost on her that the Government indeed took the very first step to “regain the trust of the people” and “restore stability” by clearing the Presidential Secretariat to resume its functions. Her failure to grasp this simple fact questions her abilities as an ambassador and not that of a Government with a difficult task at hand.

Initially, the protests at the officially designated site since March 2022 spilled over to encompass the Galle Face Greens – a public recreation ground. Then, the protestors moved right up to the Presidential Secretariat’s main entrance, thereby blocking entry or exit from the building. This in itself is an illegal act and therefore cannot be construed as “peaceful.”

Yet, in the name of democracy – as advocated by the West and Western influenced civil societies – the anti-Government protests have been allowed unhindered. Finally, the very building that housed the functions of the Presidential Secretariat was swallowed by the protestors.

The American Envoy’s tweet that fails to reflect this true status implies a slyness on her part to misrepresent facts. Judging by the opinions articulated in the public domain, this effort has not been well received by the Sri Lankan public.

At the recent Parliamentary debate on declaring emergency, dissident MP Wimal Weerawansa revealed that Chung met former President Gotabaya as many as three times a week and intimidated him from taking decisive action against the developing anarchy to restore normalcy in the country.

This revelation has added to public anger. After Former President Maithripala Sirisena sacked the Yahapalana Government, the then US Ambassador Alaina Teplitz played a pivotal role in reinstating that Government. During that period, the then Speaker Karu Jayasuriya decided on parliamentary matters that were put to vote based on the sound and not show of hands or count of a secret ballot. He simply claimed, “this side is the loudest,” and so that side won the debate.

Likewise, a concentrated effort by pro-protestors pronounced that the protestors were the only voice. They did not offer any survey or election results to prove their point.

President Gotabaya, a strong advocate of democracy, thus heeded the protestors’ demands and peacefully resigned after transferring power to ensure the country does not fall into anarchy. Those who accuse him of coming to power on the bodies of the Easter Attack victims should reflect the careful steps taken by President Gotabaya to avoid a bloodbath.

He only wants to return to his family in the US. This is being denied by the US. To treat a leader who successfully managed the pandemic and followed democracy to the letter as a fugitive is preposterous.

If Chung fails to note the growing resentment towards her, the consequences can be catastrophic. The current trend is to set up ‘Go Home villages’ and create public mayhem until the offending individual is ousted from office. Both the democratically elected President and Premier were thus removed. A similar effort is underway to oust the incumbent President.

Therefore, it should not surprise any, if anti-Chung protestors suddenly declared the US Embassy (claimed as part of the protest site, for the building is in the protest site’s neighbourhood) as the ‘Julie Chung Go Gama.’ Would Chung then simply catch the next plane out of the island as the “peaceful protestors” smashed up the US property?