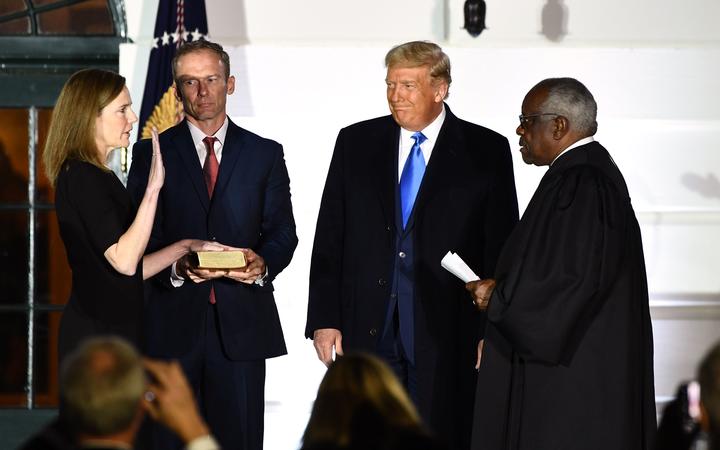 When Judge Amy Coney Barrett placed her hand on the Bible and was sworn in as a Supreme Court Judge of the USA this week, it’s fair to ask whether Sri Lankans who opposed the 20th Amendment looked the other way. Mangala Samarweera and his acolytes of the SJB — though Samaraweera himself is now in political purgatory — were the greatest fans of Uncle Sam.

They loved the USA to the point of distraction, which is fine as this is a free country and they can love anyone they like. But did they know that in their preferred citadel of democracy, that shining beacon, a Supreme Court Judge appointed by the President, took her oaths before a fellow Supreme Court Judge, with the appointing President, Mr. Trump, and the Judge’s husband looking on?

In case the Samaraweera club of democracy savants, such as Harsha de Silva, or Eran Wickremaratne or even Sumanthiran were wondering, this appointment of a Supreme Court Judge by the President of the US is happening just days before a presidential election. No doubt there are protests by the opposing Democrats on that score, but even they do not for a moment dispute the fact that it is the President who should appoint Supreme Court Judges in the US, who mind you, have tenure for life.

That’s right, they are Judges of the apex Court for as long as it is physically possible for them to serve on the Bench.

So Mangala Samaraweera should give it a rest. Sri Lanka is following the example of the citadel of democracy no less. Amy Coney Barrett is known as a Conservative Judge.

Yes, they even slot those Judges in the US to different camps. Conservative Judges are of course selected by Republican presidents because they are thought to be partial to Republican policies, and by contrast Presidents such as Barack Obama chose Liberal Judges, such as Judge Sonia Sotomayor, for instance.

We don’t do that here. Supreme Court Judges are not slotted as Jaathika (nationalist) or Vyjaathika (anti-national) or progressive or left leaning or any such thing.

They are Judges, and are appointed for their proficiency in legal interpretation, and in making fair judgment over disputes coming before them, in Court.

Because these Judges are all relatively young and because Supreme Court Justices serve for life in the US, it is thought that they would change and define the political complexion of the US Supreme Court for decades to come.

Again, no doubt the Democrats are unhappy, and there has even been talk of the Supreme Court being made a larger institution comprising of more Judges than the current nine, if Democrat Joe Biden is elected president next week. That may or may not happen — but in spite of everything, nobody, not even the Democrats, aggrieved as they are about the Supreme Court’s composition these days, say that the President should not appoint the Judges of the US Supreme Court.

The point being that there are some constitutional fundamentals in the citadels of democracy such as the USA. That the President appoints Supreme Court Judges is one of them, period. Moreover they are not coy about it either.

Presidents make such appointments to further their agendas and advance their liberal or conservative causes, as the case may be. The further point being made is that the opposition types here who lamented that the 20th Amendment was injurious to the independence of the judiciary, were play-acting.

Surely, Samaraweera’s faithful acolytes such as Wickremaratne and Harsha de Silva etc knew all along that in their favourite democracy, the President appointed the Supreme Court Judges, boasted about it, and made such appointments a huge qualification for re-election as well? Never mind Trump, even President Obama waxed eloquent about his Supreme Court appointments. “I am confident that Elena Kagan will make an outstanding Supreme Court Justice,” Obama said in a speech once upon a time, in his hometown of Chicago. “And I’m proud of the history we’re making with her appointment.” He was referring to his selection of a liberal female Justice to the Supreme Court.

The guardian angels of democracy here — those who are self-appointed — should do a refresher on how democracy works in the polities they idolise. Why does the US President appoint a large number of federal judges, and the Judges of the Supreme Court and the Appeal Courts? It’s because that’s how democracy is supposed to work. The Executive does have some power over who decides over contentious issues on his agenda.

This is irrespective of the doctrine of Separation of Powers. There is indeed a doctrine of Separation of Powers, that is respected in polities of the complexity of the United States, but ideally that does not preclude the President from appointing persons whom he has faith in to dispense justice. The President is granted this power, as he is elected by the people. This power of appointing Judges is not ceded to members of some Council that consists of unelected persons who are not answerable to the people.

Other aspects of the 20th Amendment are also mostly in line with what obtains in advanced democracies, and it’s time that the melodrama of the Opposition with regard to that piece of legislation ends because all that teeth gnashing is beginning to look so comic, as if it’s some sort of endless puppet show featuring the Opposition Maha Dena Mutthas.

There are certain legal aspects of the 20th Amendment and what finally materialised as law, that needs a legalistic perusal on another day, but suffice to say for now that democracy was well served. The Supreme Court made its Order, and the Government has scrupulously abided by the changes — and had in fact made most of them as proposed Committee Stage Amendments even before the Supreme Court judgement was delivered, effectively preempting Court.

But such preemption was not a point of contention between the Executive and Judicial branches in any way; it was clear that the Government from the time the Amendment was mooted, was intent on respecting our constitutional tenets, both in letter and spirit.

Some detractors have said the Government has other objectives rather than the stated economic policy objectives in getting the 20th Amendment passed in a hurry. But all roads lead to Rome and in the context of Covid-19, all objectives are economic.

Everything has to be ratiocinated in terms of stability, and reaching a certain level of political stability is a prerequisite for economic development in the kind of crisis we face now due to the dangers of the pandemic. Is stability an ulterior motive? Hardly. The 20th Amendment seeks to balance out forces both within and without the SLPP’s political dynamic.

Now that it’s passed in its original form, more or less, there is reason to believe the economy will improve, despite the trying times.