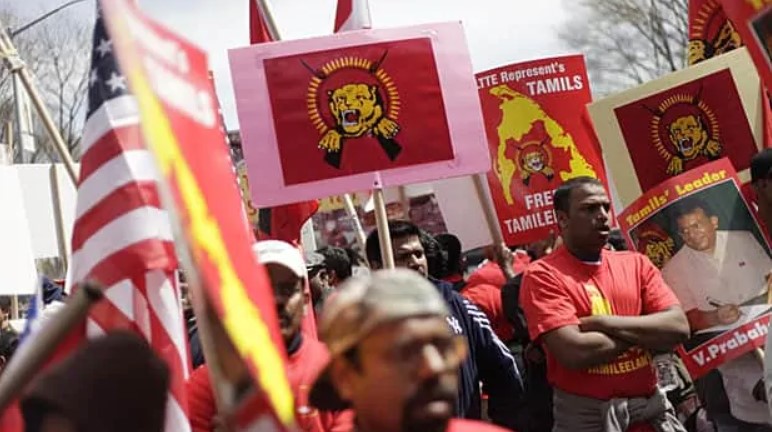 In the year 1977, the Tamli United Liberation Front (TULF) contested the General Election on a separatist ticket. The TULF swept the Tamil vote. That result was and is interpreted as an unofficial referendum on the Tamil people’s views on separation.

And so the argument can be made as follows; if in any geographical territory the vast majority of people believe it is in their best interest to be independent of any directives however insignificant originating from any structure of authority outside that territory, then there should not be any objection whatsoever from anyone.

Easy isn’t it? Yes, easy. Now let’s consider the complexities which, among other things, punch holes in the above formulation.

The overwhelming majority of Tamils do not live in such a Tamil-only territory. There’s a more-or-less-Tamil-only state in India just a few kilometers away where there are 100 million people who call themselves Tamil

The TULF came up with racist rhetoric. The TULF was the strongest ‘Tamil’ party contesting the particular electorates. The TULF could have promised the moon or promised nothing at all and may very well have secured the same number of seats. But then again, one could argue that this is mere speculation. The TULF contested on a separatist ticket and therefore the victory needs to be seen as an affirmation of a need; a separatist need.

On the other hand, the TULF’s promise was one that was hard to resist. After all the ‘separate state’ was not just those electorates the TULF won, but roughly one-third the landmass of the island. Land beyond belief is mouthwatering for any community or individual in a world where no one is making land any more.

Now consider a people whose claims with respect to traditional homelands are at best tendentious. Consider a people who, simply on account of identity, have to live their lives out as a community that doesn’t have a nation to go with that identity. Consider a people who, like other people, have economic difficulties but have discovered that ‘identity’ is a convenient protest-dress. Consider a people who have been dished communal rhetoric for decades laced with theses such as Chelvanayakam’s ‘A little now more later’ and formulae such as G.G. Ponnambalam’s 50-50 representation for less than 10% of the total population. Now consider a politician or political party that spews rhetoric regarding a promised land. It would be hard to resist, would it not?

Now here’s the rub. We don’t have such a ‘pure’ community in Sri Lanka and certainly not in the territory ‘mapped’ by artful Tamil Eelamist cartographers who merely superimposed land-gram aspirations on lines drawn by colonial rulers for their convenience. We do have the Jaffna Peninsula, post-ethnic cleansing by the LTTE, spawn of Tamil nationalists who came before and after the Vadukkoddai Resolution of 1976 and of course the 1977 General Election. Even then the claim of the area being part of ‘exclusive traditional homelands’ is iffy. If history (that can be substantiated) presides over such a discussion, the claim would wobble.

For argument’s sake, though, let’s say the Jaffna Peninsula is ‘All Tamil’ and has been so from a million years ago (or some such time unit preferred by creative historiographers). Someone says ‘this is our home, our native land, we should have our own nation within such and such demarcations with our own flag, anthem and currency.’ Compelling, what?
Here’s what’s not been said.

The overwhelming majority of Tamils do not live in such a Tamil-only territory. There’s a more-or-less-Tamil-only state in India just a few kilometers away where there are 100 million people who call themselves Tamil. Just south of the intended border there is a community that already feels besieged, a community whose ancestor fought invaders and died in proportions much higher than the national count at that time if you broke down resistance along ethnic lines. Lines are easily drawn on paper. Their maintenance on the ground is costly and has been marked by bloodletting. Indeed, we saw what the rhetoric of 1977 (and before) produced. Not all of it can be laid at the door of ‘Sinhala Buddhist Racists.’ Much of it, indeed, was the work of the ‘Boys of 1977’ if you will. No border. No separate state. Much violence. Much destruction. There has to be a lesson there for those who want to learn.

These are some of the factors that the rhetoricians are silent on simply because they stain the idyllic picture of the promised land. They won’t say ‘All Tamils in Sri Lanka will in future live in Tamil Eelam’ because not all Tamils would want to. They won’t say ‘let’s ask all Tamils to vote on whether or not they want a separate stated, provided that if the majority says “yes” then all of them will move to the promised land.’ They won’t ask anyone to wonder how Tamils living in a country that would be, by default, a ‘Sinhala Nation,’ would feel. Would they feel besieged by a besieged people? What can they expect from a majority community that for various reasons legitimately feel short-changed by brethren belonging to their community? Would they say, ‘We are a Tamil-only nation, but south of the border it’s multi-ethnic and multi-religious?’

So, there’s a lot of blanks in the story. There are probable outcomes that are left out. Here’s another blank: many who talk separatism, arrogantly or politely, are fond of saying ‘there are no pure races in the world,’ but they leave ‘Tamils’ out of that narrative. They can’t afford to because the bottom falls out of the exclusive traditional homelands story if they did.

However, let’s cut to the chase. Let the separatists tell the entire story without leaving the unsavory parts out. That alone would sober aspirations and diminish grievances to true dimensions, i.e. unfilled. Plain and simple. And let’s not entertain the nonsense formulation couched in that silly phrase ‘within a united Sri Lanka,’ because unity just cannot be legislated and has no political meaning in any state-formulation.

So there it is. A challenge for Tamil Eelamists and their various apologists. Come clean.