It’s the season of condescension 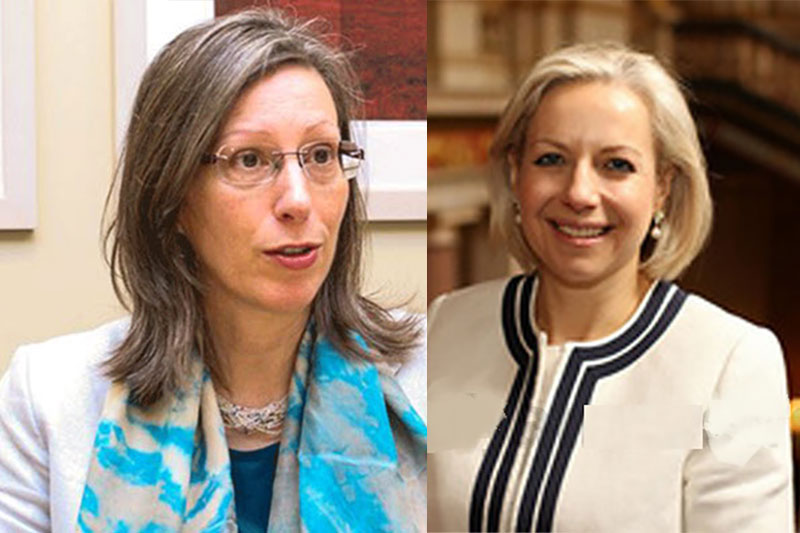 Not untypical, it comes from UK and the USA, nations which compete for the unenviable top spot among nations with the worst human rights records in history. Well, not just the past, but in the here and now, considering involvement and the nature of involvement in wars around the globe as well as treatment of their own citizens. We could add handbooks on interrogation and legislation to protect violators of human rights. We could also add the protection of despots and despotic governments. We could add, moreover, the funding, arming and training of insurgents to topple democratically elected governments that do not toe the US-UK line.

Let’s start with the United Kingdom. UK High Commissioner Sarah Hulton has tweeted ‘UK raising human rights concerns with Sri Lanka, including forced cremation of #COVID19 victims. UN report to be published next week, will inform the approach to UN_HRC.’

It’s a pity that her Sri Lanka counterpart, like all those who held that post before, have never once raised ‘human rights concerns with the UK’ including crimes against humanity (in the long ago, ‘short ago’ and now), but then again we know the earth is not flat and slant is the order of the day.

The lady is concerned with the dead or rather the disposal of dead bodies. This is good. We too are concerned with the dead, theft and absolute silence on the matter of returning loot and other relevant compensation. We like the words recompense and reconciliation for you see, ma’am, we have waited long and can hardly bring ourselves to reconcile with what your country has done and does.

Anyway. We are also concerned about ‘forced cremation’ (as well as forced dispatch to the hereafter by those who swore by Allah, Prophet Muhammed and the Quran, prayed in mosques before affirming their faith on Easter Sunday 2019). The government, in its wisdom and in circumstances generated by a pandemic, no less, has decided that burial is risky. The risk of infection is greater in, say, Parliament or a supermarket, and if the government is loath to shut down such facilities, it should permit burial of the COVID-19 dead.

Now is this the most urgent matter at hand? Muslims may say so, not forgetting that no Muslim community has stood up to say ‘come, bury the dead in our village/township’). It is a serious matter, for non-Muslims as well. No community should feel marginalised or its religious sensitivities pooh-poohed, even those communities that have birthed members who don’t give a hoot about the sensitivities of other religious communities. On the other hand, isn’t Ms. Hulton livid about sections of Sri Lanka’s constitution that are an affront to the basic tenets of equal citizenship, freedoms of expression, association, etc? Why has she (and her Government) not read the Riot Act to the Sri Lankan Government for doing zilch about the horrendous legislature pertaining to Muslim marriage and divorce? Aren’t the rights of Muslim women not a matter of concern? Isn’t the slant in favor of a particular community (the Muslims) on a number of counts not worthy of mention? Will the UK raise such issues with Sri Lanka and inform UNHRC of UK’s approaches with regard to the same? Or is it just the humbuggery of selectivity at work, same-old, same-old? Ms Hulton would know but she won’t tweet, that’s a safe bet.

That’s what Washington’s sidekick nation has to say. How about the USA? The US Ambassador Alaina B Teplitz, in a virtual round-table discussion with some journalists, has regurgitated a tired lecture. The Daily Mirror has captured the essence. Ms. Teplitz, the paper reports, a) asks the government to come up with a meaningful plan at UNHRC, b) urges to implement what it promised, c) reiterates need to reverse mandatory cremation policy. With respect to ‘c’ the observations penned above are applicable to Ms Teplitz as well.

What’s interesting are her comments on the East Container Terminal of the Colombo Port. Now Ms. Teplitz, who appears to have appointed herself as THE EXPERT on what’s best for Sri Lanka claims that offering it to an Indian company is essential ‘for Sri Lanka’s maritime future.’ Interestingly, she admits ‘India [is] the beneficiary of Sri Lanka’s port facilities or rather transshipment activities.’ So, Sri Lanka’s maritime future is a matter of India benefitting from Sri Lanka’s ports? Sounds a lot like submission, surely?

She’s ok with India benefitting. She’s ok, obviously, with the absence of ‘mutual benefit’ with respect to the East Terminal, but insists that partnership with China should be ‘mutually beneficial’ which, she says, is what the US encouraged as far as Sino-Lanka relations are concerned.

The ‘why’ of it is easy to figure out. India is the US’s proxy in the region, especially considering the recently signed Basic Exchange and Cooperation Agreement on Geospatial Cooperation (BECA) and the operations of the Quadrilateral Security Dialog (Quad). The USA is compelled to cheer India even when India does the down and dirty. The USA is compelled to say ‘it’s good for Sri Lanka that India benefits, never mind Sri Lanka compromising her maritime future or being arm-twisted into deferring such to Indian interests.

What does Ms. Teplitz mean when she says ‘Sri Lanka should come up with a meaningful plan’? Let’s de-code. It simply means, ‘we want you to inhabit our version of your reality.’ It means, ‘we know what’s best for you.’ It means ‘you are clueless, we are clued-in, so do what we say.’ It means, ‘you are a bunch of newborn kittens and as such, blind, therefore let’s show you the way.’ She asserts, ‘there is a degree of concern that there is not much progress on what everyone had hoped for, she said it was the reason for the U.S. and other countries to offer help to Sri Lanka,’ and insists, ‘this is was not bullying Sri Lanka but helping Sri Lanka to realize the pledges made by it to its people.’

How very condescending!  And how livid would Ms. Teplitz be if, for example, Sri Lanka lectured her and her government about articles of the US Constitution that are affirmed only in their breach, institutionalized racism, rampant brutality targeting non-white peoples, etc!

Who is this ‘everyone’ she speaks about? Would she elaborate? And is she saying that somehow Sri Lanka cannot ‘realise’ on her own accord what’s good for the people? Referring to Foreign Minister Dinesh Gunawardena’s statement that there would be a comprehensive reconciliation strategy through a domestic process, she says ‘I would like to see some follow-through on that!’

Wow! Wow! Wow! Is she the overseer on Sri Lankan affairs? Has she been appointed as the giver of certificates, good or bad? ‘Follow-through’ eh? Well, the only follow-through that will make her stand up and cheer would be the furtherance of what SHE believes is good for Sri Lanka (to hell with what Sri Lankans believe is good for them)!

We know what ‘US concern’ is all about and what it is not about. We know the script and the score. Condescension over and above all this is a bit much, but that’s to be expected. Just another version of ‘White Man’s Burden!’ We are probably required to cheer. I cannot. I laugh, instead. So, Ms. Teplitz and of course, you, Ms Hulton, thanks.