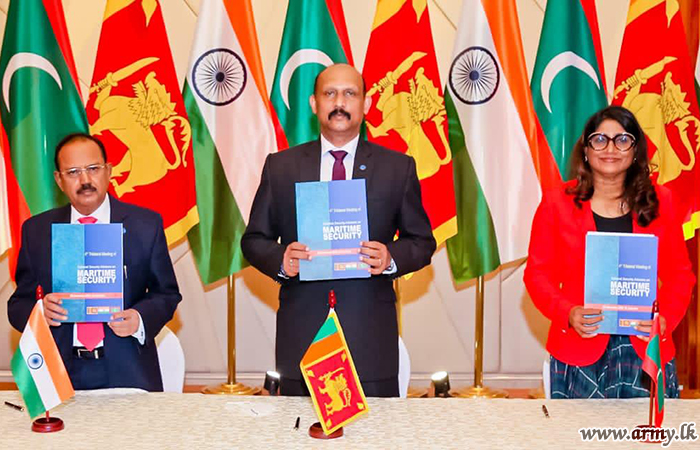 Sri Lanka last week hosted the 4th National Security Advisor Level Meeting on Trilateral Maritime Security Cooperation after a 6-year hiatus. The India-led initiative is joined by Sri Lanka, Maldives, Seychelles and Mauritius – all small island nations. The pact’s relaunch is on the premise that for India size doesn’t matter as long as the small ones know how to last long. A question remains unanswered. Why was there a gap?

P.K. Ghosh in his paper ‘’Maritime Security Trilateralism: India, Sri Lanka and Maldives’’ argues that asymmetric threats such as maritime terrorism, arms and drug trade, piracy, human and weapons smuggling require multinational response strategies which made India build maritime capacity of its friendly neighbours. India’s temperament has however failed these neighbours from achieving their own maritime ambitions let alone regional maritime cooperation. They have helplessly hoped for mood fixes so India can lead the pact’s maritime plan again. India has for centuries considered the Indian Ocean Region its strategic backyard but that is no reason for unexplained hiatus’. Such behavior also indicates the ranking these small nations occupy on India’s priority list despite being declared partners of an important pact for the sake of tokenism. No meaningful pact can be in slumber-mode for six years, but China’s rise has rewritten that status quo.

Prime Minister Narendra Modi in March 2015 in Mauritus termed the pact SAGAR- Security and Growth for All in the Region. He visited Sri Lanka and Seychelles in the same breath but avoided the Maldives which had by then sentenced the India-backed former President Mohamed Nasheed to 13 years in prison. India thought a snub would make Maldives feel left out. It did, but not for too long as then President Yameen Abdul Gayoom wasted no time turning to China for development. A $198 million, seven-kilometer China-funded Male-Hulhumale bridge was built and illuminated in red letters ‘China-Maldives Everlasting Friendship.’ The words were hard to ignore for rival powers landing at the Ibrahim Nasir airport, but most had no option but to use the bridge to get to and from the capital Male.

The same was the case with Sri Lanka. The 2014 Yahapalana election manifesto promised to suspend Chinese projects to tickle anti-China powers. The likes of Ranil Wickremesinghe knew all too well that such summary suspensions are a thing of yesteryear. So, when in power he allowed both the Chinese Port City to continue and also handed over the Hambanthota Port in a 99-year lease to China to India’s dismay.

No global power is the centre of the international system. More and more smaller nations are joining a movement not to tolerate such colonial-imperial posturing anymore. When one’s avenues for support increase, the need to stay in disrespectful relationships fall. SAGAR has not got there yet because the Indian Ocean Region islands are still heavily dependent on India for maritime support. That is no justification for India’s silent treatment towards any of them – whatever the reason. The snubbed nations that turned to China on land will have no option but to turn to China even at sea in the face of Indian negligence. Tokenism won’t recuse the pacts then. Most of these countries would make the switch only upon realizing that being pulled into tokenist partnerships with India’s on-when-it wants and off-when it doesn’t security pacts destabilize their nations more than the supposed risk from powers India wants countered in the region.