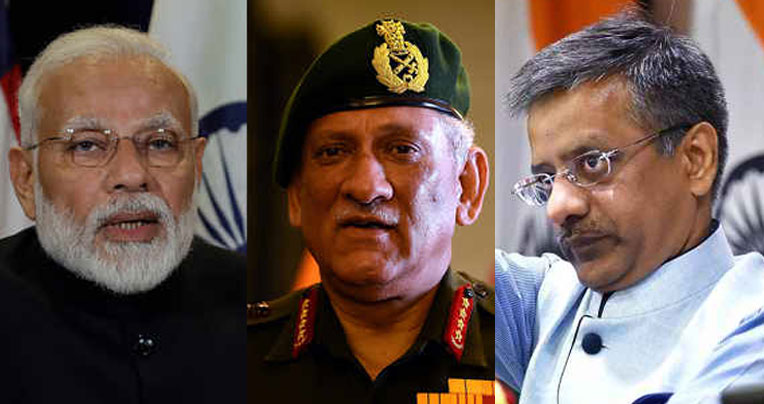 Not too long ago, the Secretary, Ministry of Foreign Affairs, stated that Sri Lanka has an ‘India First’ foreign policy. He later corrected himself, interjecting caveats he ought to have mentioned in the first instance. It is ‘Sri Lanka first,’ but India matters most when it comes to bilateral relations, he said.

India is more diplomatic. ‘Neighbors first,’ Delhi says, although everyone knows that it is essentially ‘India first and then Pakistan.’  ‘Pakistan’ for negative reasons, obviously.

Anyway, it’s not considered nice to badmouth anyone, not even an enemy. Even the US mission in Colombo, which was backing the previous regime and is understandably not happy with the decisions of the people, makes it a point to say ‘we are friends,’ when in fact they are pissed no end that the current regime didn’t play ball with that country’s policy blueprints for Sri Lanka.

As such, a remark by India’s Chief of Defense Staff General Bipin Rawat seems to be out of order. The man, affirming the truth of the ‘India First’ doctrine and part affirming the lie, ‘Neighbors First’ warned Nepal not to be too friendly with China.

That’s basic for India. India wants to be the One Big Boss in the region.

Rawat has drawn from the foreign policy script. First he says ‘we are old friends (never mind that we want you to toe our line).’ Then he recognizes (officially) that Nepal, like any other country, can and should have an independent foreign policy.

Then the rub: India’s goodwill, he says, comes without strings (unlike China). He then elaborates, throwing  in ‘the case of Sri Lanka.’

India’s ‘strings’ or rather the claim ‘no strings’ is laughable. India has always had strings. Well, chains if possible. India plays hard ball. India had a problem with Sri Lanka a few decades ago. Well, no problem, all that needs to be done is to get around a bunch of brainless thugs, arm them, train them, fund them and you plunge the ‘rogue country’ into thirty years of war!

[Reads like a Washington story, eh? No wonder India signed a comprehensive agreement with the USA a few weeks ago!]

Back to Rawat.  Does Delhi endorse his views? Was he mouthing Delhi’s point of view? Is it ‘our way or the highway’? Is India playing Big Brother? Is Rawat Delhi’s true face and if so is Prime Minister Narendra Modi the South Asian version of the Ugly American?

What does High Commissioner Gopal Baglay have to say?