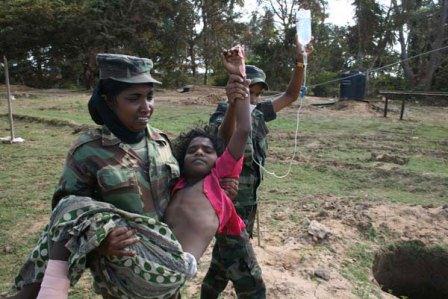 The last extract from the Report of the Darusman Panel that I read referred to rape. The Panel begins its discussion of this factor by stating that ‘Rape and sexual violence against Tamil women during the final stages of the armed conflict and, in its aftermath, are greatly under-reported’.

They go on to indicate that their Report is based on ‘indirect accounts’ and explains this by talking about many ‘photos and video footage, in particular the footage provided by Channel 4’.  If this is their principal evidence, one wonders about their standards, given the questions raised about the authenticity of what Channel 4 showed, the discrepancies in the dates Channel 4 put forward, the shifty segments (such as the shifting leg, which even Alston’s bunch of experts could not explain).

Anyone with a modicum of intelligence combined with objectivity would have thought about previous allegations with regard to sexual violence made against our forces. The most famous of these is the pronouncement by Hillary Clinton about our forces using rape as a weapon of war, for which Ambassador Butenis apologized. While I can see that we were correct to accept her apology graciously, it is astonishing that she herself did not see fit to examine and explain how Hillary Clinton was fooled into making that particular blunder.

Then there was the famous case of I think fourteen women found with their throats cut near Menik Farm, reported with complete fraudulence by the ‘Guardian’, though not I hasten to add by its regular correspondent. The article was written by a callow young man named Gethin Chamberlain, who later confessed to me that he realized later the story was false. He claimed that he had written it up because he thought he had a reliable source, which I think he indicated in response to a question from me, though never directly admitting it, was a UN official. He told me that after that he had realized he should not trust that particular source, but surely a good journalist would have tried to find out why such an outrageous lie was thrust upon him.

I do not think Mr Chamberlain was quite as innocent as he pretended to be, for in his article he claimed that he had tried to contact the Ministry of Disaster Management and Human Rights, but they did not respond. The day this happened was a holiday, but since he had the number of my mobile phone, it is clear he did not even try to get hold of me. It was typical however that he wanted to both have his cake and eat it, which is why he tried to suggest that we were avoiding him, when in fact, with the usual pusillanimity of such creatures when dealing with us, he did not dare to even try to talk to us, given the enormity of the whopper he was perpetrating.

By then I had a pretty shrewd idea of what was going on, confirmed indeed by Jeremy Paige of the Sunday Times, whom I also met in Delhi around the same time. When I asked him why he was perpetrating lies, having denied that he had anything to do with the massive figures as to deaths that his colleagues were advancing, he claimed that he had UN authority for some of the things he wrote. When I pointed out that the UN had refuted these, he claimed that there were junior people in the UN who disagreed with the position of their superiors, and were therefore leaking information to journalists.

What is sad is that the various UN Heads affected by this knew what was going on, but were too nervous to deal with this firmly. I had had a woeful instance of this just recently, when Amin Awad, the generally amiable head of UNHCR, responded aggressively when my Minister called him in to ask why UNHCR had released a report replete with falsehoods, without first discussing it with the Ministry as it was required to do.

Amin evidently decided that attack was the best form of defence, and claimed that details had been shared with government in Vavuniya. This was not enough, and we told him so, but I found out later that that claim was false, though doubtless Amin believed it was true. On my next visit to Vavuniya, I questioned the informants (clearly part of Chris du Toit’s ‘network’) who had been responsible for the lies. They claimed they had spoken to the military officials responsible, but when I brought the two groups together, they confessed that this had not been the case. It turned out indeed that they had made general requests for better protection, but had not mentioned what they had trumpeted to the world, about dead bodies of women being found near the river. The reality was that one old woman had died while near the river, but this had been turned into efforts to suggest systematic rape.

Unfortunately one of the women was called Pelosi. She looked like a witch and behaved like one, but I was told, I think by Amin, that she was connected with Nancy Pelosi, the Speaker of the US House of Representatives, and therefore had to be treated with care. This may explain why she was allowed to get away with lies.

Pelosi’s belief was that protection was nothing to do with the Sri Lankan government, so nothing should be reported to us. This indicated that remedial action was not what she wanted, she saw her role rather as that of raising issues to embarrass the government, and doubtless contributing to the War Crimes Project that was being planned at the time.

It was with great difficulty that I changed this mindset, at least as far as the UN official responsible for protection issues went. This was Elizabeth Tan, who I thought was basically decent the first time I met her, and perhaps indeed her failure to work with government earlier was because we had no structures in place to deal with the problems she needed to raise. By 2009 however we had regular committees to investigate problems, and I had established very close relations with the Military Officers responsible for Civil Affairs in all the Districts. I should pay tribute in this regard to the Coordinator I was finally able to appoint for the Confidence Building and Stabilization Measures Project, which had been in abeyance until I took over.

I was also able to deal direct with the Special Forces Commander in the Vanni. I had promptly contacted him when the report Amin tried to defend came before us, to check on its allegations of harassment and sexual harassment of IDPs coming through checkpoints. He said there were strict instructions against both, but it was possible that there had been some rough handling, which he said he would look into and stop. With regard to sexual harassment, he said bluntly that it was impossible, because there were stringent measures to deal with this.

I realized he was right, and we had come a long way from what might be termed the Krishanthi Kumaraswamy days – which we must ensure are never repeated – when I read through the reports of all the agencies handling protection issues.  Previously UNHCR had simply kept these reports without sharing them with the Ministry.

I found that the problems they dealt with were not major ones, certainly not ones for which government could be faulted, though we needed better mechanisms to address them. With regard to sexual violence, almost all allegations referred to the IDPs taking advantage of each other in the crowded conditions in which they found themselves – a factor we had pointed out to UNHCR in January, in asking for better preparations.

With regard to the military, in the several months in which I monitored these reports, there was only one allegation. It concerned a soldier going into the tent of a female IDP at night, and not coming out for several hours. They were joined in between by another female IDP. I have no idea what Ms Pelosi’s fertile imagination made of that one, but as I told a journalist, they might well have been discussing Greek Philosophy.