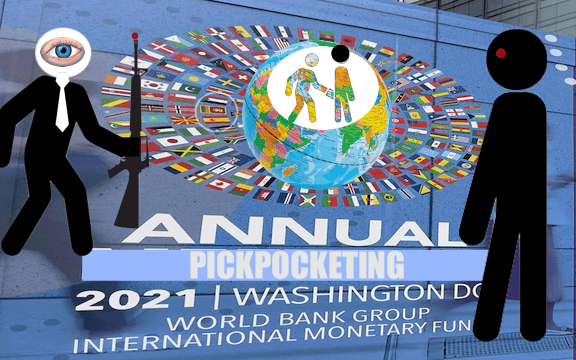 which will permit us to maintain this position of disparity over the peoples of Asia.

Despite all jabberwocky about democracy, transparency, etc., the International Monetary Fund (IMF) remains a white bastion (controlled by the Gang of Seven – US, Japan, Germany, France, England, Canada, and Italy). The USA determines the IMF quota of major shareholders. And the IMF is another name for the US Treasury, which exercises virtual veto power over its analysis and decisions. What about the US Treasury? A handmaiden of top US capitalists….

The IMF’s ‘Article IV’ delegation is in Colombo, December 7-20. The media will not tell us what this ‘Article IV’ exactly means, nor give the IMF delegates’ names nor which local informants they be talking shop with. Yet, the entire capitalist media and all their economists demand we kneel before IMF dictat.

But we already do. Sri Lanka has long been ensnared in the world capitalist network, and bound hand and foot to the IMF since 1950, more so since 1977. In fact, the IMF has its own office in the Central Bank of Sri Lanka. No wonder our finance minister is in Washington to talk to their boss (see ee Focus).

• The IMF is tagged as the world’s financial traffic policeman, directing capital flows, telling capital where capital must go and where capital must not go, laying down the law, hectoring, fining and jailing minor miscreants. Even better, they cause multi-car crashes and pileups (Mexico, Brazil, Russia, Asia, and the whole world from 2008 onwards, etc.) while refusing to jail the mad driver: capitalism! Those mangled and murdered to sustain the unsustainable are not highlighted in the accounts, are never shown on viral videos. And truth be known, the mad driver is this policeman’s boss, the Great White Father, the grand importer-exporter plantation master.

• So, when the IMF policemen leave in a few days a sycophantic media will dress them up as Santa Clauses leaving gas cylinders as gifts under their thorn bushes camouflaged as Christmas Trees. ‘Let there be light!’ they shall holler, and millions of kitchen fires shall ignite like burning bushes in Exxon Sinai. Some people shall then sigh relief, and an amplified cry shall ring out giving thanks to the Great White Father in Washington. ‘We told you so,’ their puppet economists shall then echo, ‘You have to bow down.’

Economists and media mavens see the IMF and the World Bank as very profitable career goals, with multimillion dollar pensions! No wonder then that every English news medium, opposition party economists, etc., are demanding the government submit to the IMF. Since, all IMF agreements are strictly confidential, the media happily repeats their ‘bland communiqués and meaningless statements’, while US-funded thinktanks (Advocata, Verité) mimic their demands to sell off national resources, garnering daily headlines.