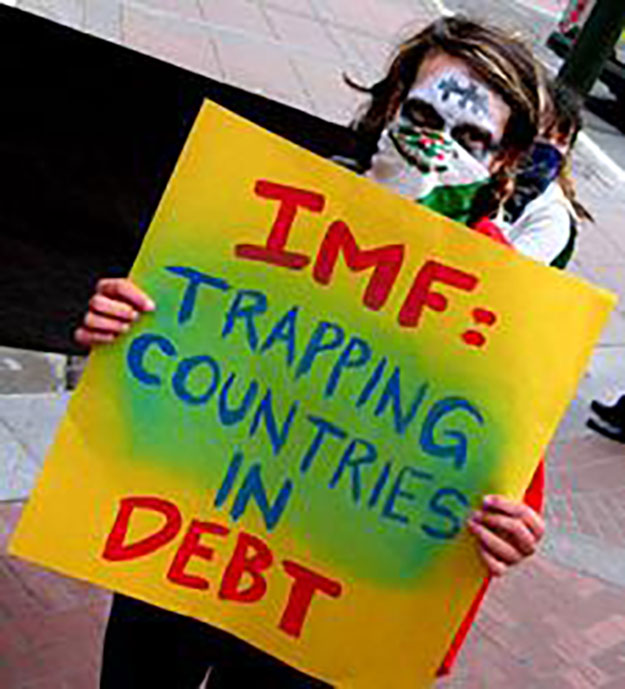 Both the World Bank and the IMF were founded in 1944 at the Bretton Woods conference. The World Bank is tasked to aid developing nations in reducing poverty and increasing their well-being. The IMF’s main purpose is to stabilize the international monetary system and oversee the world’s currencies. The World Bank offers “financing, policy advice, and technical assistance to governments, and also focuses on strengthening the private sector in developing countries. The IMF keeps track of the economy globally and in member countries, lends to countries with balance of payment difficulties, and gives practical help to members.” Thus IMF & World Bank are the left & right hands of the Western economies – the former colonial rulers that inadvertently control world systems via international entities they indirectly control & manipulate.

Since 1944 how many decolonized developing countries has IMF transformed into successful economies via their self-claimed success blueprints & policy decisions or better still how many countries have become economic disasters after taking IMF advice?

IMF is NOT a LOAN AGENCY. All loans given by IMF are CONDITIONAL. Countries taking IMF loans MUST implement its Structural Adjustment Programs & have to pay back what is borrowed with INTEREST. As of April 2018 IMF member funding totaled $692billion. This money did not fall from the sky. All money is created and printed. What gives or who has given certain countries and certain monetary entities to dictate and determine how much should be given, when & conditions for its use and deadline for return.

IMF is funded by quota subscriptions paid by member states. The size of the quota is determined by the size of the country’s economy. The country having the larger economies will give bigger quota and will also have a bigger say in the IMF. So there is no equality in the IMF similar to that seen in the UN where one country has one vote whatever the size. The US contributes 17.44% ($54billion) to the IMF. Seychelles contributes just 0.005%.

Further favoritism within the IMF is given to major European economies & the US who have the bigger say when it comes to voting.

The powerful 28 EU countries get 32% say

While the size of a country determines its weight, the size also decides how much membership it gives and how much it takes. Bigger the country – bigger the membership quota but able to take bigger loans! Smaller countries give less and will get less too! Bigger the country – decision powers within IMF are greater as well. The quota is calculated by GDO (50%) openness of countries (30%) economic variability (15%) international reserves (5) – this is known as Special Drawing Rights (SDR)

Since 1944 IMF has been giving loans almost all of the 195 countries in the world – the only countries that IMF has not been able to give loans or advice to is – Cuba, North Korea.

Surely IMF template should have brought countries out of debt including the major powers who are in debt – making them the top 10 countries in debt!

What type of loans does IMF give?

While IMF is not an AID agency and all loans have CONDITIONS while the money taken with interest have to be returned – IMF is nothing but a LOAN SHARK no different to an ordinary person begging to a lending ‘mudalali’ who happily gives the amount asked but places a set of conditions if the money given is not returned! It’s no similar to taking a car lease – inability to pay lease may result in confiscating one’s car! Govts have no choice in rolling out various conditions which are always targeting the poor & middle classes only.

Countries that go to IMF or countries that IMF lobby are already in financial difficulties – how moral is it to provide a presumable ‘relief’ in form of a IMF loan which has ‘STRINGS attached’ ultimately landing that country in greater difficulty? Eventually countries in debt to IMF end up having to sacrifice benefits to citizens to satisfy IMF demands!

What are the IMF demands?

To open up local economies for foreign investments, to give greater access to national resources, to privatize public enterprises, to cut government spending on health and education to the general public and all this while the IMF main sharks strategically get their ‘investors’ ready to descend and tap into the resources, cheap labor, disregard environmental concerns after the IMF do all the dirty work! The governments of these countries have no power o handle the situation having committed to the SAPs in taking loans. Thus, Governments end up becoming unpopular among the citizens having to make up various lies to cover the agreements made behind closed doors with the IMF.

When IMF gives a loan IMF self-mandates itself to monitor a country’s economy and recommends policy changes. IMF visits countries, holds discussions with Government & others. IMF research teams provide the technical assistance and training to draft policy changes as per IMF desires. Politicians end up parroting what the IMF tells them.

Sri Lanka joined IMF on 29 August 1950 – Sri Lanka was IMF’s 50thmember. Sri Lanka’s SDR quota is approximately $800million. Since 1950 – Sri Lanka has taken 16 IMF loans. On 6 occasions the full agreed amount was not released citing non-compliance to conditions by Sri Lanka. Countries like Sri Lanka often get caught in the template and formula spells of the IMF which is like the insurance covers – the smallest ignored prints carry the deadliest clauses!

IMF came to play a bigger role after 1977, Yet,how did Sri Lanka manage development projects (Gal Oya Development scheme, roads, towns etc done with own funds in 3-4 years) WITHOUT falling into debt prior to 1977? How did foreign debt which was $750m in 1977 end up $47307m almost 45 years later?

Is it correct to say that the decisions the successive governments had to take having fallen for the IMF trap has brought Sri Lanka to its knees?

This is how Sri Lanka landed in this soup!

We are insane to take more advice from the very entity that brought us to our plight.

Former GA Gavin Karunaratna proposes that Sri Lanka continue the method that was a success pre-1977 handling foreign exchange to buy firstly essentials & secondly to import as per requirement of industrialists & thirdly to consider applicants for foreign travel etc. To come out of this mess, we have to adopt some drastic measures but ones that we create and not those imposed forcibly by foreign lenders.

It is good for every country that has become a victim of IMF policy and structural programs to review where they have gone wrong against what they were previously doing right. It could be just possible that these global economic institutes do not wish countries to come out of the woods and wish countries to remain in the economic ICU/ventilator forever – braindead!

The question is how many countries has IMF taken out of debt or put into debt? Who can answer!