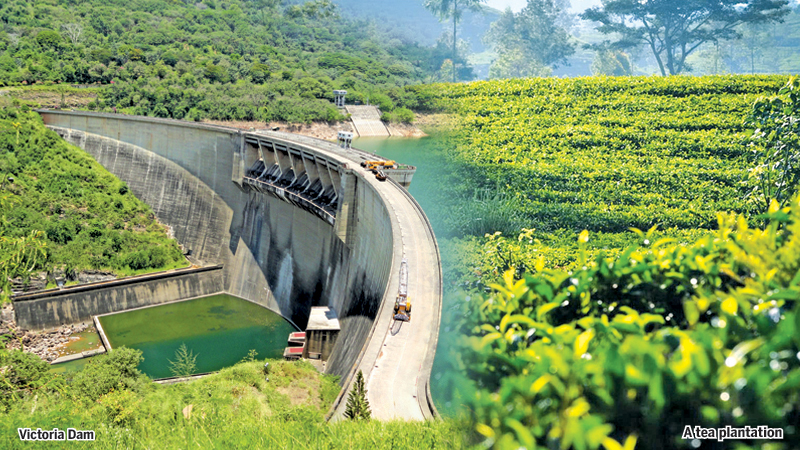 Opportunistic and strategic use of human rights by the Western powers to maintain hegemony continually ignore violations of the rights of nature and humanity rooted in the destructive model of economic development the same powers introduced to the world.

Ancient Sri Lanka was known for its Buddhist eco-centric approach to life. The origin of the contemporary ecological and social crisis can be traced to the colonial period and the incorporation of the country into the global capitalist economy.

Sri Lanka’s forest cover declined from 84 percent in 1881 to 70 percent in 1900 and to around 50 percent in 1948, when the British left. Deforestation and plantation development laid the basis for land erosion and loss of animal habitats and biodiversity.

The origin of the current human-elephant conflict is attributed to deforestation starting in the British era, along with the widespread colonial practice of killing animals for sport and trade. The revered elephant was declared a pest and a reward of a few shillings was given for the head of an elephant.

With the introduction of the Open Economy in 1977, Sri Lanka became subjected to neo-liberal policies such as privatization and structural adjustment, largely as conditions to loans from the World Bank and the IMF.

The massive Mahaweli River Development Programme of this period provided access to land for the poor and a significant increase in the country’s food production and power resources.

However, the construction of dams and irrigation networks, roads, and similar infrastructure also radically altered soil and water systems including degradation of watershed conditions and loss of wildlife habitat and populations.

A related agricultural reform began in the 1960s (the ‘Green Revolution’), with a campaign to promote the use of agrochemicals and transgenic crop varieties, resulting in the loss of original indigenous seed varieties.

The Mahaweli programme and irrigation have supplied the water for most of the rice cultivation in the North Central Province. This area is also — likely not coincidentally — the site of the nation’s highest incidence of chronic kidney disease among poor farming communities.

The rich industrialized countries in the Global North are responsible for nearly 80 percent of historical global carbon emissions. Yet poor countries in the global South, such as Sri Lanka — whose carbon footprint is negligible — are the greatest victims of climate disasters. The current and looming impact of climate change on Sri Lanka is massive: Annual mean air temperature has significantly increased by between 1961 and 1990 increasing 0.016 °C per year;Annual average rainfall over Sri Lanka has decreased by about seven per cent between the 1931 to 1960 period and the 1961 to 1990 period;Forecasting the rise in sea level, Sri Lanka is faced with a predicted devastating coastal erosion rate of 0.30 to 0.35 metres a year, with adverse impact on nearly 55 percent of the shoreline.

The 2004 tsunami drastically highlighted the vulnerability of the low-lying plains in the coastal zone to any future rise in sea level. The Northern and Eastern coastal areas claimed as traditional ‘Tamil homelands’, are vulnerable to submersion as they are flatter than other coastal areas.

In 2015, the Internal Displacement Monitoring Centre (IDMC), an international aid NGO, identified Sri Lanka “as the country with the highest relative risk of being displaced by disaster in South Asia. For every million inhabitants, 15,000 are at risk of being displaced every year in Sri Lanka.” In 2017 alone, the country experienced seven disaster events, mainly floods and landslides, and “135,000 new displacements due to disaster. Sri Lanka is also at risk from slow-onset impacts like soil degradation, saltwater intrusion, water scarcity, and crop failure.”

Sri Lanka was ranked second among countries most affected by extreme weather events in the Global Climate Risk Index 2019 and sixth in 2020.

Deforestation is considered the greatest environmental threat facing Sri Lanka today. Sri Lanka ranked fourth among countries with the worst deforestation of primary forests in the world in the 2000–2005 period.

A highly controversial current case is the housing development supposedly constructed for internally displaced persons (IDPs) on Wilpattu National Wildlife Park. The housing will remain despite a recent court judgement that declared it illegal.

The ‘polluter pays’ principle was upheld, but this only requires that the offender reforests other lands “in any area equivalent to the reserve forest area used for re-settlement of IDPs.”

Even this court decision is under appeal by the seventh respondent, former Industry and Commerce Minister Rishad Badiuddin. Moreover, as ecologists point out, mere tree planting elsewhere will not lead to recovery of the intricate forest eco-systems that were destroyed.

Another major controversy involves the Sinharaja Rainforest covering an area of 18,900 acres. It is home to over 50 percent of the country’s endemic species and is a UNESCO World Heritage Site.

Deforestation is now taking place in the Sinharaja area for the construction of a road for an isolated village bordering the Forest Reserve and for the suspected building of hotels, shops and other encroachments.

A National Plan based on surveys and clear demarcation of boundaries of Forest Reserves, Wildlife Sanctuaries and Conservation Areas and enforcement is urgently needed to avoid conflict and encroachment over remaining forests.

A recent announcement was made by Irrigation Minister Chamal Rajapaksa regarding proposals to construct two irrigation tanks inside the Sinharaja, each spanning an area of five acres, with Chinese involvement.

A 30-kilometre water tunnel to transport freshwater to areas in the South (including possibly the Chinese-controlled Hambantota Port) is also reported. This announcement has raised alarm over environmental impact and likely loss of the UNESCO World Heritage status.

There are, unfortunately, many other environmental controversies, the most destructive of which involve export-led growth and foreign companies.

In 2017, 263 waste containers carrying biomedical, plastic and other waste from the UK was brought for illegal dumping in Sri Lanka. Such toxic dumping by rich Northern countries in the poor countries of the South is sadly a common practice. After a legal victory by environmentalists, the containers are being sent back to the UK.

A proposed new project in the Eastern Province is the Eastern Minerals Project of Capital Metal, a company from the UK which plans to mine the ‘highest-grade’ mineral sands containing ilmenite, rutile, zircon and garnet. While it promises to be a highly profitable venture, environmentalists fear massive and irreversible damage to the vulnerable Eastern coastline.

Yet another controversial mining project is proposed by Titanium Sands, an Australian company, that wants to mine titanium on the island of Mannar. Mannar is a bird paradise and local environmentalists blame the Australian company for ‘illegal conduct’ and plans to dramatically transform the ecosystem and limit land use by the local community.

Just as the world is at the cusp of a new era of technological and corporate authoritarianism, Sri Lanka, with its strategic location in the Indian Ocean, is also at a decisive historical juncture.

The island is facing new forms of external intervention and competition primarily involving the expansionist and national security efforts of China, USA and India.

Sri Lanka is centrally placed in the maritime route of China’s Belt and Road Initiative. China is now in control of the Hambantota Port, the Colombo Port City, a terminal of the Colombo Port and a hybrid renewable energy project on three islands off the Jaffna peninsula, just 50 km from the Tamil Nadu coast.

The Quadrilateral Alliance of the USA, India, Australia and Japan is challenging this Chinese expansion, and is, in turn, in control of key strategic positions and natural resources.

India, for example, is in control of the British colonial era Oil Tank Farm in the seaport town of Trincomalee. It is reported that the development of the west terminal of the Colombo Port will also be given to the company of Indian billionaire Adani.

The US Millennium Challenge Corporation’s proposed Compact with Sri Lanka was turned down by Sri Lanka due to local protests over resource exploitation, land grab and an effort to splinter Sri Lanka into two separate entities under the control of the United States.

However, there is suspicion that some of the main objectives of the MCC to digitalize land registers and privatize land to make them available for development by transnational corporations maybe be continuing in other ways.

The US signed an Acquisitions and Cross Services Agreement (ACSA) with Sri Lanka in 2017 making the island a ‘logistics hub’ allowing US military vessels open-ended access to Sri Lanka’s seaports and airports.

The ACSA is part of the “grand strategy of a united military front between the US and India in the Indo-Pacific.”

A Status of Forces Agreement (SOFA) between the USA and Sri Lanka, which could turn Sri Lanka into a US military base, has been proposed but not yet signed due to local protest.

While the implications of Neo-colonialism for Sri Lanka’s sovereignty, unity and territorial integrity have been much discussed in recent media, the ecological and social implications remain relatively unexplored. Some of these include: Conflicts between Chinese interests and farming families around the Hambantota Port over Chinese offers to buy ancestral properties of locals.Protests and legal action by environmentalists over the Chinese Port City, especially coastal sand excavation and dumping of chemical waste.Control of the West terminal of the Colombo harbour by India’s controversial Adani Group, which has a history of environmental and financial violations in Australia and India.Effects of militarization of the island under the ACSA and possible SOFA agreements and military confrontation between the Quadrilateral Alliance and China in the Indian Ocean.

Future survival with the wisdom of the past

Sustainable agriculture has a long history on the island, as in any long-lasting indigenous culture, and it needs to be brought back to the fore. Local self-sufficiency and agro-ecology are the only solutions to future food scarcity and surviving the vicissitudes of the global economy.

Both Sri Lanka and the world have enough natural resources to support people if resources are shared equitably and sustainably used. It is the apocalyptic destruction of the unregulated greed of neoliberalism that must end.

For this to happen, policies of corporate regulation must be put in place at both the national and global levels. These policies also need to incorporate a broader definition of human rights that includes the rights of nature and people’s rights to natural resources and livelihoods.

There is an urgent concurrent need for environmental education that transcends political party and ethno-religious divisions and unites people both with each other and with a survivable environment. Environmentalism is also humanism that looks to the future, and the rights and survival of future generations. (IDN-InDepthNews)

(The writer, a scholar and practitioner, has taught at Yale, Brandeis, Mount Holyoke (where she received tenure), Georgetown, American and other universities and colleges in the U.S. and abroad.)