How Security Forces gained victory and Peace was achieved: A Timeline 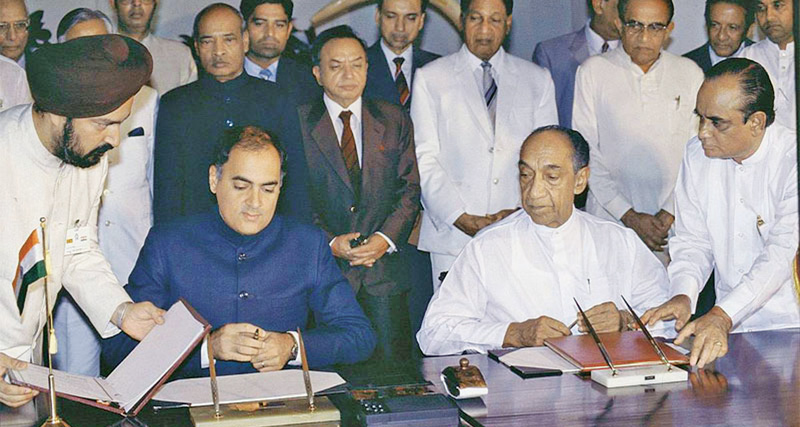 The armed conflict which lasted for almost three decades between the Sri Lankan Government Forces and the LTTE is known as the ‘Eelam War’. The conflict broke out in 1983 and concluded in 2009. During this period, the war was temporarily stopped thrice due to international pressure to engage in peace negotiations.

Since the 1970s there was friction and hostility between the Sri Lankan Government and Tamil militant groups. It was on July 23, 1983, that the LTTE launched its first major attack against Sri Lankan Armed Forces. A total of 13 soldiers on patrol in Jaffna were killed by the attack. This marked the beginning of a brutal war.

On July 13, 1985, in Thimphu, Bhutan, the first-ever peace talks between the Sri Lankan Government and the Tamil militants was initiated. Six Tamil groups namely TULF, PLOTE, LTTE, EPRLF, TELO and EROS were represented. Ultimately it was proven to be nothing more than a futile attempt as the war resumed shortly.

From the Vadamarachchi Operation (Operation Liberation), the Sri Lankan Military managed to surround the LTTE and corner them in Jaffna by 1987. The end of the conflict seemed imminent at the time. However, international pressure was brought against Sri Lanka through the voices of 50 million Tamils living in India. The request extended by the Indian Government to cease the war was not received favourably in Sri Lanka. In retaliation, Indian Prime Minister Rajiv Gandhi deployed a fleet of ships as relief to the LTTE. The Sri Lanka Navy prevented this convoy from reaching the Tigers and subsequently, Indian Forces airdropped supplies in support of these militants.

As further involvement of the Indian Military Forces was becoming apparent, President J.R. Jayewardene initiated discussions with the Indian Government with the intention of reconciling previous disputes. An outcome of this discussion was the signing of the Indo-Sri Lanka Accord on July 29, 1987, by J. R. Jayewardene, President of Sri Lanka and Rajiv Gandhi, Prime Minister of India. In accordance with this agreement both Sri Lankan troops and the LTTE had to withdraw from the North and allow the Indian Peace Keeping Force (IPKF) to take control of the area.

The presence of IPKF troops was not favoured by Sri Lankans at large. Once President Premadasa was elected in 1989, his decisions led to the removal of IPKF within one year. Also, the LTTE convinced the Premadasa regime that the IPKF should be sent to India. Further, Indian troops were desperately looking forward to get back home after almost, three years of fighting, instead of peace keeping. About 1,200 Indian soldiers were killed and 2,900 were wounded. The Indian Prime Minister at the time Vishwanath Pratap accommodated President Premadasa’s request and withdrew his Forces. The last batch of Indian troops left from the Port of Trincomalee on March 30, 1990. The Tigers finally achieved their aim of getting the full dominance of the North and Eastern provinces of Sri Lanka.

During the course of these peace negotiations, although the initial stages seemed somewhat amicable, there weren’t any decisions made on significant issues like repealing the 6th Amendment and the dissolution of the Provincial Councils of the North and East.

The second phase of the armed conflict between the Sri Lankan Armed Forces and the LTTE is referred to as Eelam War II. The failure of peace negotiations between President Ranasinghe Premadasa and the LTTE led to the recommencement of the war in 1990. The LTTE massacred 600 Sinhalese and Muslim police personnel when they surrendered to the LTTE as ordered by the Sri Lankan Government on June 10, 1990.

In October of the same year, the Tigers forcibly evicted approximately 28,000 Muslim residents from their homes in the Northern Province within 48 hours. At the time Sri Lankan Forces were confined to Military camps. There was no active warfare between the Government and the Tamil Tigers as the peace negotiations were in progress. The attack on policemen led to the calling off of peace talks and a week later, the Defence Minister at the time, Ranjan Wijeratne announced the commencement of Eelam War II in Parliament. The Government Forces lost a substantial area of territory due to LTTE attacks including camps and abandoned police stations. The Tigers blocked land access to the Jaffna Peninsula and by July 1990, they gained control over most areas in the North and East.

The People’s Alliance Government came into power in August 1994. The new Government started negotiations with the LTTE and a ceasefire was declared on January 8, 1995. The third phase of the armed conflict between the Sri Lankan Military and the LTTE, Eelam War III started in 1995 after a 100-day ceasefire period. Eelam War III marked the upsurge of LTTE forces and a decline of the Sri Lankan Military. This war started after the Tigers attached explosives and destroyed two gunboats of the Sri Lanka Navy. The LTTE gradually evolved into a formidable fighting force during this period. They used shoulder-launched anti-aircraft missiles and attacked Sri Lanka Air Force aircraft flying over the Jaffna Peninsula.

Though Sri Lankan Military Forces were able to recapture the Jaffna Peninsula during this period, they suffered many major military debacles having major camps in Pooneryn and Mullaitivu coming under heavy attacks.

Parliamentary elections were held in 2001 and it resulted in the victory of the United National Party led by Ranil Wickremesinghe. After winning the election Prime Minister Wickremesinghe with Norwegian mediation tried to bring this conflict to a settlement through peace talks.

In December 2001, with Norwegian mediation, the LTTE and the Sri Lankan Government agreed to cease attacks on each other and a Ceasefire Agreement was signed.

The fourth phase of the armed conflict between the Sri Lankan Military and the LTTE, Eelam War IV, began in July 2006. The battle began in the Eastern Province of Sri Lanka when the Tigers blocked the water supply to paddy fields in Mavil Aru in Trincomalee. Subsequent to combating for almost a year, Sri Lankan troops gained total control of the East after capturing Thoppigala on July 11, 2007.

In Eelam War IV, major battles broke off in Sampur, Vakarai and Thoppigala. Civilians living in these areas attempted to flee to secure areas, but the LTTE tried to stop this. According to records from the World Health Organization (WHO) many civilians were displaced in the course of these battles.

The fighting intensified after the LTTE launched an air attack on the Katunayake airport on March 26 in 2007. The last stage of the war broke out around the vicinity of the Nandikadal Lagoon and nearly 300,000 Tamil civilians were trapped in this area as the LTTE didn’t allow them to flee to safer grounds.

Eelam War IV came to an end on May 18, 2009 as Government Forces captured the last LTTE-dominated territory and killed their leader Velupillai Prabhakaran. The then President and the current Prime Minister Mahinda Rajapaksa and the then Defence Secretary and the current President Gotabaya Rajapaksa along with the three Forces Commanders, IGP and CDF Chief, had finally steered the Nation towards peace.