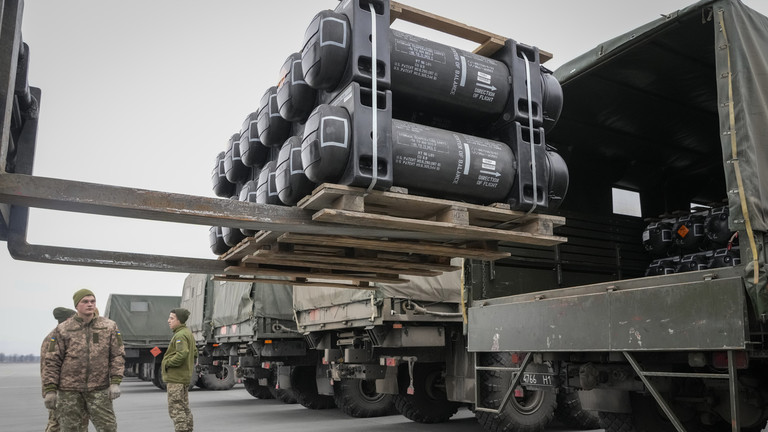 If you’ve wondered why so much Western media coverage of the Ukraine conflict seems to be based on “Kiev says,” the answer is largely down to the power of lobbying. The Ukraine is always good and Russia is always bad narrative didn’t create itself.

On July 11, Washington DC-based public affairs consultancy Ridgely Walsh registered as a Foreign Agent on behalf of Ukrainian interests with the US Justice Department.

The company – which typically advises Silicon Valley big hitters such as eBay, Google, Snapchat, SpaceX, and Uber – is just the latest Beltway operator to enlist under the Foreign Agent Registration Act (FARA). This is archaic and abstruse legislation thrust to the forefront of the mainstream news agenda during the ‘Russiagate’ hoax of the Donald Trump presidency.

Last July, just 11 US-based firms were registered as lobbyists for Ukrainian clients under FARA. Over the course of 2021, these influencers attempted to pressure Washington to kill the Nord Stream 2 project, increase lethal aid shipments to Kiev, and post ever-more US and NATO forces along Russia’s border.

In the process, they amassed over 10,000 contacts with lawmakers, think tanks, and journalists. This is a staggering figure when one considers the Saudi lobby – one of the largest and most influential in the US – had just 2,834 interactions with these elements in the same timeframe.

Lobbying activity on behalf of Kiev over 2022 will inevitably dwarf even that vast total. Now, the number of registered pro-Ukrainian agents in Washington stands at an unprecedented 24, with six being compelled to register in June alone. Strikingly too, many of these companies are providing their services free of charge – to the extent pro bono lobbying for Zelensky’s government has been dubbed the ‘hottest trend’ in Washington DC political circles.

This phenomenon cannot be attributed to generosity of spirit, or altruism. Some lobbyists work for the Ukrainian government without remuneration for a positive PR boost, others to rehabilitate their reputations and remain in favor with US clients after enthusiastically representing Russian corporations prior to the February 24 invasion. As we shall see, there are potentially other, more spectral factors at work in some cases, too.

It is likely many more firms are effectively representing Ukrainian interests than are officially recognized under FARA. Ridgely Walsh only registered in July, after Vox documented its work chaperoning two Ukrainian pilots around Washington, meeting with journalists, senators and representatives, and Defense and State Department representatives. It had been working for the Ukrainian government for over five months by that point.

The FARA filing indicates that Ridgely Walsh engages directly with Yury Sak, adviser to Ukrainian Defense Minister Aleksey Reznikov, and Lieutenant Colonel Denis Smazhny, and an appendix in the document sets out the terms of Ridgely Walsh’s work for Kiev.

It states that the company “provides public relations and media relations support to Ukraine, including by engaging with US media representatives, government officials, NGOs, educational institutions, think tanks, investors, and foreign policy experts; arranging media interviews; developing and pitching op-eds; [and] organizing events.” The firm also creates “opportunities for Ukrainians to interact” with journalists, politicians, pundits, and “other sections of the US public.”

These activities are provided “on a volunteer basis and without compensation,” and are “motivated by [the company’s] compassion for the Ukrainian people.” It adds that Ridgely Walsh’s team includes a Ukrainian national, a reference to its senior director, Veronika Velch.

Velch’s background is colorful, to say the least. In 2013, she spent five months interning at the state-run Voice of America, an asset of US Agency for Global Media, which is funded and controlled by the US government, and openly avows that its output is directly influenced by Washington’s “national security interests.”

After an unexplained seven-month gap in her CV, in May 2014, Velch joined the Center for United Actions, a Washington DC-based NGO “working for the benefit of Ukrainian citizens,” founded by Ukrainian politician and former KGB asset Oleg Ribachuk in 2009.

It was one of many subversive efforts he bankrolled in the years leading up to the 2014 Maidan coup, which played a pivotal role in stirring up that insurrectionary upheaval. Two years prior, Ribachuk declared the 2004 Orange Revolution “was a miracle” – “we want to do that again, and think we will.”

The constellation of troublemaking initiatives funded by Ribachuk also received significant financing from American oligarch Pierre Omidyar, and US intelligence agency fronts USAID and the National Endowment for Democracy (NED), which were fundamental to supporting the 2014 Maidan in Kiev.

Writing in February 2014, veteran journalist Bob Parry noted that the NED had over the previous year funded 65 projects in Ukraine totaling over $20 million, amounting to “a shadow political structure of media and activist groups that could be deployed to stir up unrest when the Ukrainian government didn’t act as desired.”

The National Democratic Institute, a division of the NED central to the Orange Revolution, also sponsored a campaign cofounded by Velch, ‘Follow the Money’, which battled for political campaign finance transparency in 2015-16.

Tantalizingly, Ridgley Walsh’s FARA filing states that Velch “engaged with foreign policy and national security reporters in the US” regarding Ukrainians who traveled back to Kiev after February 24, while she was “outside the US” – in other words Ukraine – and coordinated directly with “US government officials and media” journeying to the country or covering the conflict.

Clearly then, Velch and Ridgely Walsh have been crucial to shaping coverage of the war since it began. In this context, her professional history is important to consider – for one of the NED’s core objectives, and key successes, in the Maidan coup was presenting domestic and foreign audiences with a highly romantic narrative of the demonstrations in Ukraine, and their participants, which bore little relation to reality.

Based on the output of NED-funded media outlets such as Hromadske, viewers would have been forgiven for concluding the protests were energized by concerns over human rights and democracy, and were representative of the entire Ukrainian population.

In reality, as a February 2014 Washington Post op-ed exposed in forensic detail, polling data showed less than 20% of protesters were motivated by “violations of democracy or the threat of dictatorship,” only 40-45% of Ukrainians were in favor of European Union integration, soon-to-be deposed President Viktor Yanukovich remained “the most popular political figure in the country,” and no survey conducted by that time had ever indicated majority support for the uprising.

Much of the public opposition to the government overthrow stemmed from the “anti-Russian rhetoric and the iconography of western Ukrainian nationalism,” which was widespread among demonstrators, “not [playing] well among the Ukrainian majority.” In all, 50% of Ukraine’s population resided in regions that “strongly identified with Russia” and had done so for over two centuries – “nearly all” of them were “alienated by anti-Russian rhetoric and symbols.”

These crucial facts were otherwise hidden from view in the West at the time, and became ever-more suppressed in the months and years following Maidan, as the Ukrainian government waged all-out war on the residents of Donbass – the blood-spattered dimensions of which were barely mentioned in the media.

A one-sided and utterly distorted view of events in Ukraine persists to this day, courtesy of Ridgely Walsh and its peers. With vanishingly rare exceptions, established news outlets have presented the conflict as a David and Goliath battle between unalloyed good and evil, and have unquestioningly reported extremely dubious official claims emanating from Washington and London about Ukraine’s endless heroism and triumphs on the battlefield.

In fact, the vast majority of Western media coverage of the conflict has amounted to simply regurgitating Ukrainian statements, without any attempt at fact checking.

Returning to the FARA filing, its last 20 pages consist of a table outlining almost 400 introductions to journalists and interviews and articles placed in media outlets, arranged by Ridgely Walsh between the start of February and mid-July.

Dozens of these entries are related to the aforementioned pilots, including multiple invitations for journalists to a private dinner with them in Washington. At that summit, one of the aviators is reported by Vox to have openly said: “Our main goal is self-explanatory. We’re meeting media and lawmakers in order to push the weapon flow to Ukraine.”

The meal represented just one of many steps in a whirlwind tour of the US, which led to the pair being quoted widely in US media, including an appearance on CNN alongside rabidly pro-war actor Sean Penn.

The aforementioned Lieutenant Colonel Denis Smazhny, an “aerial defense specialist,” also gave several interviews to various US news networks in late June, pleading for Kiev to be given fighter jets instead of drones, which the US had previously vetoed, due to major concerns about sensitive technology falling into Russian hands, and their use triggering a hostile counter-response from Moscow.

In support of his entreaty, Smazhny alleged Kiev had destroyed 500 air-borne targets to date, and 150 Russian helicopters – a somewhat unbelievable claim, although it appears to have had quite an impact on US lawmakers. On July 15, Congress approved $100 million in funding to tutor Ukrainian pilots in manning American-made F-15 and F-16 fighter jets, despite it taking at least three months for pilots to be trained to an even a ‘basic’ level.

Evidently, Washington and Kiev are preparing for a very long war indeed. And a vast army of lobbying firms are ready, willing, and able to make that happen, by deluging the media and legislative chambers the world over with eminently suspect narratives to maintain inexorable and ever-increasingly vast Western arms shipments to Kiev, despite prolongation of the crisis ensuring more death and destruction, mass starvation in the poorest reaches of the world, and possibly a global financial collapse.