How many Tamils PAID to be TORTURED to get asylum in the UK? 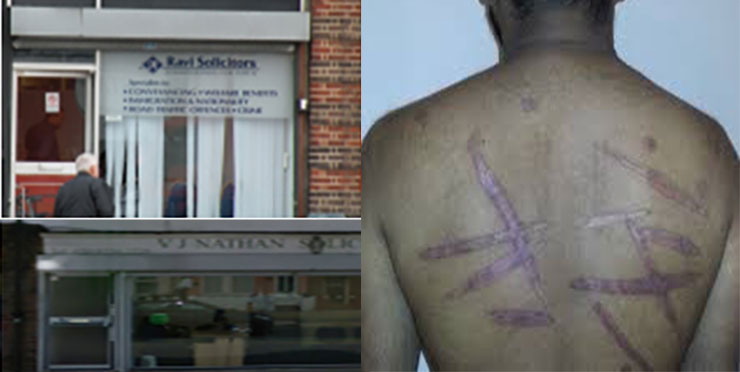 We are talking about sterling pounds 5000-6000 being paid to be burnt with cigarette butt ends and face other tortures to enable British doctors to verify health records and endorse the torture as being ‘recent’ and to imply the tortures/rape were committed by the Sri Lankan forces. The monetary aspect fattens the purses of those making a business out of torture-asylum and enables foreign governments to use these examples to politically target countries like Sri Lanka to facilitate interventionist roles. Is the UK authorities silent because they are well aware of their role in this? Does the UK authorities not mind UK tax payers having to eventually finance these ‘economic cum terrorist-linked’ refugees/asylum seekers who end up not only manipulating the UK social welfare systems but playing out the British public via notorious international rackets the LTTE and Diaspora elements are linked to?

The international tarnishing campaigns against Sri Lanka takes the form of reports, documentaries, films, panel discussions which are all funded by Foreign Governments through NGOs established for interventionist purposes.

The best example is the released report by Yasmin Soosa who was selected by Ban Ki Moon to be a member of his (not UN) Panel of Experts.

Yasmin Sooka’s report ‘An unfinished war: Torture and Sexual violence in Sri Lanka 2009-2014’ was a politically motivated report. In her own words she says “we released the report in time before the Geneva Resolution because we wanted to influence the Geneva resolution”.

Yasmin Sooka’s report is politically and denies her any status as ‘independent’ because the ‘Unfinished war: Torture and Sexual Violence in Sri Lanka 2009-2014’ report is funded by the British Foreign Office through the Bar Human Rights Committee of England and Wales while Sooka’s other project partner ‘International Trust and Justice Project Sri Lanka’ is impossible to locate!

Sooka’s report takes a sample of 40 ‘selected’ asylum seekers majority of whom the report says were ‘involved in active combat’ a feeble way to admit they were associated with the LTTE. The mystery remains with the non-disclosure of the witnesses, how they contacted the lawyers, no one knows who the lawyers are, no one knows who the medical experts are or even who the translators are – there is much always lost in translation given that these ‘victims’ in view of them seeking to remain in the UK have all the motives to invent stories and they make an excellent couple for those wanting to politically and diplomatically influence Sri Lanka!

When Sooka herself is an EU employee how can her report have any credibility?

Therefore, the Sooka report and its 40 ‘selected’ asylum seekers involved in ‘active combat’ leaves much to the imagination.

So does the BBC documentary ‘Sri Lanka’s unfinished war’. Notice how these same coterie of people are united in their usage of nomenclatures.

The story of the asylum seeker the BBC documentary presented by Frances Harrison introduced as ‘Nandani’ won her asylum in the UK.

The story has helped to uncover a sinister racket taking place in the UK and possibly elsewhere in all of the western destinations that Sri Lanka’s Tamils are seeking economic migrant status riding on the asylum ticket.

In the case of the UK the system for asylum/refugee is lax.

To apply as a refugee/asylum seek a person needs to leave their country and be unable to go back because of fear. Even a student or visitor arriving in the UK can apply if they think they are at risk of persecution when returning to their country. Asylum seekers are screened, they go through an asylum interview and a decision is given within 6 months.

Just like the Sooka report was released to influence the Geneva Resolution, the BBC documentary was released in November 2013 ahead of the Sri Lanka’s Commonwealth Summit. Sooka presented 40 cases, Frances Harrison presented 12 cases. Both reports were funded to focus on ‘Torture and rape’ as a new subject for intervention. Both reports aimed to show systematic and widespread rape existing in Sri Lanka and Nandani’s case was highlighted as the 1st post-conflict rape to come into public.

The lies of Nandani became exposed through an interview with Nandani’s mother. BBC’s and Frances Harrison’s heroine was in fact married to Uhan Padmarasa a pro-LTTE activist who had been sent by LTTE to the UK in 1995 and had been living there since. Nandani and Uhan had married in India in mid 2000 and her desire was to join him in the UK.

Thus she joins so many other women unable to join their spouses because either the spouse has a dubious record or there are fears that the true nature of who they are would get exposed at the asylum interview.

The next recourse is to seek legal counsel and there are agents and solicitors to provide ever ready services at a fee.

How many Tamils have sought assistance from the below featured solicitors?

* How many Tamils as a result of these tortures are suffering adversely as a result inspite of actually gaining asylum. As for those who inspite of paying for their wounds could not secure asylum, how are they suffering with these wounds which will never leave them physically or mentally with the realization that they actually paid to get the wounds inflicted.

Does this not look like a ‘patterened’ and paid wound? How many other such ‘wounds’ have been paid for and used by NGOs/INGOs for their reports and by Foreign Governments to embarrass Sri Lanka???

The BBC Documentary shows a Dr. Allison Callaway who says she has examined over 200 cases of alleged torture from Sri Lanka in the past 5 years (after 2009). What is interesting is that she has examined Nandani and Dr. Callaway says she has 30 cigarette butt burns on her body including genital areas. When we now know that Nandani has been telling lies, matched with the realization that there is a paid racket on charging to inflict wounds on asylum seekers we need to seriously place Dr. Allison’s claim with the all-important question of how many other Tamil asylum seekers have gone through this torture.

This is the first in a new case study of asylum seekers actually paying to get wounds inflicted on them so as to facilitate their application for asylum.

This is a very dangerous scenario. If asylum seekers from across the globe also pays to get themselves tortured and thus NGOs take up their ‘cause’ and demand asylum from foreign governments what will this result in especially when the BBC report says that some rape cases had been given asylum even without verifying authenticity?

These cases that Sooka, BBC and Frances Harrison gives as examples are certainly not fake because there are bruises but these bruises are as a result of paying to get bruised and have no association with the party they accuse of committing the crime.

Thus Sooka, BBC and Frances Harrison have no right to accuse the Sri Lanka Armed Forces when there are places in the UK where asylum seekers have paid to get their wounds and thereafter apply for asylum on the claim that these ‘wounds’ and ‘tortures’ were recent and committed by the armed forces.

This case has to be legally taken up in the UK by honest lawyers and citizen-interest lobbies to insist that the solicitors, agents and any official in the UK party to this racket are exposed and legal action is taken against them.

What needs to be highlighted is

This is a violation of ethics and morals and totally against how Governments, NGOs and even the legal fraternity are meant to function.

The systems need to be cleaned up and the UN Panel investigating Sri Lanka needs to clearly put all these lies and distortions into its report.

BY RAJPAL ABEYNAYAKE The teachers are on strike. They have raised some issues about didacticism — are the elders...
Read more
Commentary

For thirty eight years there has been little or no mention and complete silence in acknowledging the fact that scores of Sinhalese...
Read more
WAR CRIMES

While all LTTE were Tamils but all Tamils are not LTTE, it is important to also differentiate who are the non-LTTE Tamils...
Read more

While all LTTE were Tamils but all Tamils are not LTTE, it is important to also differentiate who are the non-LTTE Tamils...
Read more
WAR CRIMES

It is in the name of the Queen that horrendous crimes have been committed and continue to be. As Jamaica orders the...
Read more
WAR CRIMES

In April 1984 Nicaragua referred the US Government to the International Court of Justice claiming the US violated international law by supporting...
Read more
WAR CRIMES

BY SHENALI WADUGE It is often said that a thief shouts ‘thief’ to divert attention from himself the real rogue...
Read more
Sri Lanka BriefNews, views and analysis of Human Rights & Democratic Governance in Sri Lanka