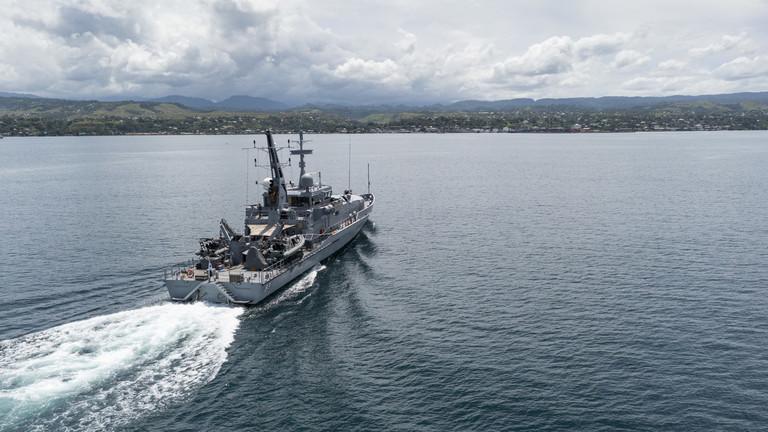 The United States can’t take a hint when it comes to the Solomon Islands, which is asserting itself and its interests despite an aggressive American diplomatic offensive, conjured purely on the intent of opposing China.

On Tuesday, the islands announced that they would be temporarily prohibiting all foreign navies from docking in their ports. Whilst this includes everyone, most media outlets reported it as explicitly targeting the US.

That’s because the US has long flaunted a strategy of global maritime hegemony by saying it can essentially dock where it likes.

In reporting that, it is no surprise that Beijing was immediately deemed as the one to blame, as part of an ongoing drama across the past year which accuses China of ‘gaining influence’ in the island country.

At the beginning of this year, China signed a widely loathed (by Australia and the US) security deal with the Solomon Islands, which went ahead despite excoriating pressure and implicit threats by both countries not to do so.

The US has upped the diplomatic ante since then, announcing that its embassy in the country will be reopened, creating a group called ‘the Partners in the Blue Pacific’, and has tried to charm the islands by presenting China as a threat, again and again.

But the Solomons are having none of it. They are simply snubbing the US’ overtures repeatedly. The security deal was just the beginning.

They have since taken out a loan with Huawei to build telecommunications infrastructure, told a US coast guard vessel last week where to go, whilst their prime minister, Manasseh Sogavare, also skipped an event commemorating an important US World War II victory in the islands earlier in August.

But the US and its ally Australia pretend not to get the point – they believe that the Solomon Islands is their own rightful ‘backyard’ and maintain its recent moves are merely a product of ‘malign’ influence exerted by China. They frame themselves as the benevolent overseers of the islands’ ‘true interests’ who do so purely out of good will.

But the Solomons themselves disagree. In their own view, they have been subjected to centuries of uncontested Anglosphere dominance, exploitation, and neglect, which first saw them come under the British Crown, and now the overlordship of Washington and Canberra, who expect obedience to their cause, but deliver nothing in return.

The Solomon Islands of course does not vent hatred towards these countries, with Sogavare expressing in a visit with Australian Prime Minister Anthony Albanese that “we are all family.” However, it does want to be a strategically independent and autonomous nation that is dominated by nobody. It doesn’t want to be a ‘backyard’ any longer.

And because of that, China provides a huge opportunity. Whilst the US and its allies have refused to invest in the development of the Solomon Islands, the access to China’s markets and investment are a game-changer in real terms for the country with a population of just 686,878 people.

In doing so, the Solomon Islands is not tilting towards a pro-China alignment (as this position would be unwise given its circumstances) but is in fact tilting towards non-alignment, that is, procuring benefits from all sides whilst making it clear that the country is not a mere stepping stone for regional military hegemony.

The US and Australia have long made demands to the Solomon Islands that it will not host a Chinese military base as part of the security deal. However, they should have foreseen this would work both ways. If China is not allowed to have a military presence there, why should others?

This is the way by which a tiny set of islands marks its own independent position in the Pacific Ocean and navigates the US-China conflict whilst ensuring it does not get caught up in it as a mere pawn. With China’s backing, America and Australia can no longer take the Solomons for granted or simply walk all over them.

This elevates the status, power, and importance of this country – whereas if China were never on the scene, we would never so much as hear of the country.