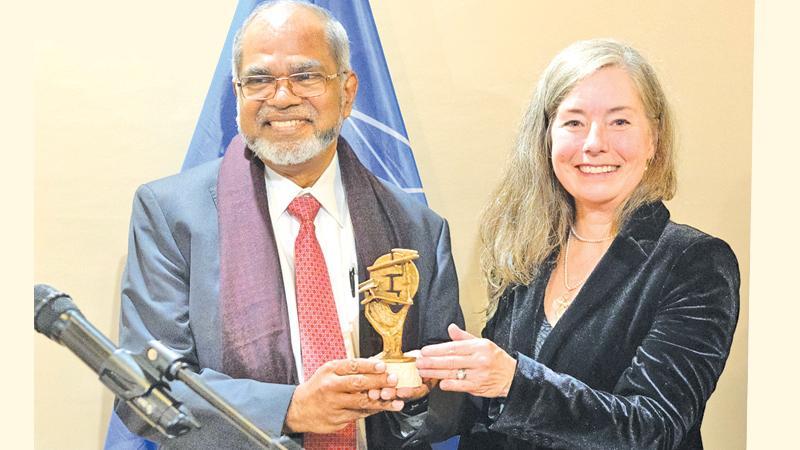 The International Centre for the Study of the Preservation and Restoration of Cultural Property (ICCROM) has selected a veteran world renowned world heritage specialist for its 2021 Heritage award.

Sri Lankan national, Dr. Gamini Wijesuriya, a former ICCROM staff member, a former ICCROM Council Member and current Special Advisor to the ICCROM Director General has been awarded the 2021 ICCROM Award in recognition of the significant contribution that he has made to ICCROM’s development and to the field of cultural heritage in general, both in Sri Lanka and internationally.

An architect and an archaeologist, Dr. Gamini Wijesuriya has dedicated his entire career to the conservation and management of heritage all around the world. His diverse experience includes roles as Director of Conservation for the Government of Sri Lanka, Principal Regional Scientist of the Department of Conservation in New Zealand and Project Manager for ICCROM.

ICCROM in its official statement announcing the award to Dr. Wijesuriya describes as follows:

“The overview that follows maps the life-long contribution of Dr. Wijesuriya to the cultural heritage sector. It is genuinely hard to find a similar figure in our field, a figure who has overcome with such agility the divide between disciplines, between research and practice, between different regions of the world and, perhaps most important of all, between heritage and society; and who has taken generations of heritage practitioners with him on that journey.”

“Indeed, ICCROM, as a capacity building organisation but also as an ever-growing community of young and mid-career heritage practitioners globally, has benefited immensely from his work. In this latter half of his long career, Dr. Gamini has mentored

generations of heritage leaders, benefitting some 1,000 heritage practitioners from over 100 countries directly, and reaching out to many more people and organisations beyond, both through follow-up national and site-based capacity building initiatives but also research and publications.”

“This contribution to ICCROM hasn’t only been in the sphere of capacity building. ICCROM is an international organisation and, for our work to be truly relevant and grounded, we must base our work on acting locally and keeping aligned to the realities and practices of all the different regions.

Dr. Gamini has broken down barriers and built connections. He has been a gateway ensuring that diverse heritage conservation approaches, perspectives, practices and applications from Asia and beyond could be collected, studied, and promoted worldwide. His contribution to ICCROM is far and wide, pinning down the function of ICCROM in serving member states and the heritage conservation community worldwide.”

The early emphasis in the work of Dr. Gamini Wijesuriya has been on a people-centred approach to the conservation of heritage that secures benefits for the society, and on how cultural heritage values intertwine with nature and spirituality, drawn from his significant work on the ‘living’ cultural heritage of the Asia-Pacific. It was to gain standing worldwide. Of late, it has proved vital in crystalising the relationship between heritage conservation and the sustainable development agenda.

If heritage leaves a mark in our lives in the form of places, Gamini has left a mark in many of our lives as a key person influencing the way we think and practice heritage today.

He held the role of Head of Conservation of the Department of Archaeology in Sri Lanka for 18 years, during which time he was responsible for leading the national heritage conservation program. Through this role he contributed significantly to the conservation of monuments spanning multiple periods (e.g., 3rd BC to Colonial), materials (wood, brick, stone) within archeological and urban settings, including six World Heritage sites.

Among his more prominent work was the restoration of the Temple of the Tooth Relic World Heritage site, destroyed by a terrorist attack in 1998. During this period, he acted as an executive committee member of the World Archaeological Congress where he was elected as the Vice President in 2003.

His involvement in the implementation of the World Heritage Convention dates back to over 40 ago, and in very diverse perspectives and roles. It started as early as 1981 as a key player of a State Party when he was involved in preparing the first Tentative List of Sri Lanka and supported the nomination process for their first properties inscribed in the World Heritage List.

As a founding member of ICOMOS Sri Lanka, he held several positions including serving as a member of the International Executive Committee and several scientific committees as well as carrying out several evaluation and monitoring missions for ICOMOS, particularly in Laos, India and Pakistan.

His time with the New Zealand Department of Conservation and the extraordinary WH of this set of islands led him to see the Convention – with its nature-culture-people emphasis therein from the outset – as the strongest policy framework of the 20th Century and a vehicle for pushing the sector forward.

His involvement with ICCROM started as a Government delegate to the General Assembly in 1984, where he was also elected as Vice President. He later participated in the course on Wood Conservation Technology held in 1988 in Norway. He has been a member of the ICCROM Council in the period 1991-1992 and worked for ICCROM as a consultant from 2001 to 2004 prior to becoming an ICCROM staff member in 2004 until his retirement in2017.

During his time at ICCROM, he played a leading role in developing ICCROM’s innovative research and training programs of Living Heritage, People-Centred Approaches to Conservation of Nature and Culture and Nature-Culture linkages, bringing the role of local communities in conserving heritage to the front.

He coordinated and directed the new flagship bi- annual ICCROM course on Conservation of Built Heritage, expanding its scope from buildings to cities and landscapes.

His role as ICCROM staff included support and cooperation in design, development, coordination and teaching of a variety of ICCROM training programs held in partnership with member states and their national institutions such as the bi-annual ICWCT courses held in partnership with Norway, the annual courses on Conservation of Wooden Structures / Archaeological sites with ACCU Nara in Japan, the courses on Management Planning and Heritage Impact Assessments with WHITRAP in China, and on Management of Monitoring in China with SACH.

He acted as the Deputy Coordinator of World Heritage activities, performing ICCROM’s advisory role to the Convention and played a key role in developing and implementing the World Heritage Capacity Building Strategy supporting a breakthrough in addressing all audiences – policy/ decision makers, practitioners, communities and networks – connecting natural and cultural heritage practitioners, which has developed into the flagship program of ICCROM and IUCN named World Heritage Leadership.

He organised and implemented a variety of capacity building courses related to World Heritage at a global scale and strengthened ICCROM partnerships especially in Asian countries, with organisations such as ACCU Nara, the University of Tsukuba and WHITRAP. He also led the ICCROM-CHA Forum, held annually from 2013 to 2017, organised in partnership with the Cultural Heritage Administration of Korea. These meetings contributed to the understanding and debates of Asian cultural heritage and led to ICCROM publications which enabled knowledge sharing globally.

He has represented ICCROM in international events and conferences, and was ICCROM delegate to the World Heritage Committee sessions annually from 2004 to 2017. In this role, he undertook a number of reactive monitoring and advisory training missions, supporting more than 50 ICCROM member states in their strategies for monitoring world heritage properties and advancing capacity building at national and regional levels. He was a lead author for the ICCROM sponsored Resource Manual on Managing World Heritage and contributed to resource manuals on World Heritage Nominations, Managing Natural Heritage, and Disaster Risk Management published by UNESCO, providing tools developed in the context of ICCROM’s work to heritage practitioners around the world.

Since his retirement from ICCROM, he continued to contribute towards heritage protection through national and international roles: he is currently serving as a Special Advisor to the Director General of ICCROM and a Special Advisor to the Director of WHITRAP Shanghai. He also continues to collaborate in a diversity of capacity building initiatives, as well as with UNESCO in both tangible and intangible cultural heritage programs.

He was appointed as an honorary senior lecturer at the Institute of Archaeology, University College London and to the Advisory Body of the Department of Archaeology of Sri Lanka. He has continued to lead international projects, recently completing a consultancy role for the National Trust of UK related to the repatriation of heritage property to New Zealand. The legacy of Dr. Gamini Wijesuriya for future practitioners continues to grow thanks through his teaching and publishing contributions covering philosophical, technical and management aspects of conservation.