Hath Hell No Fury Worse than Dayan Denied a Posting? 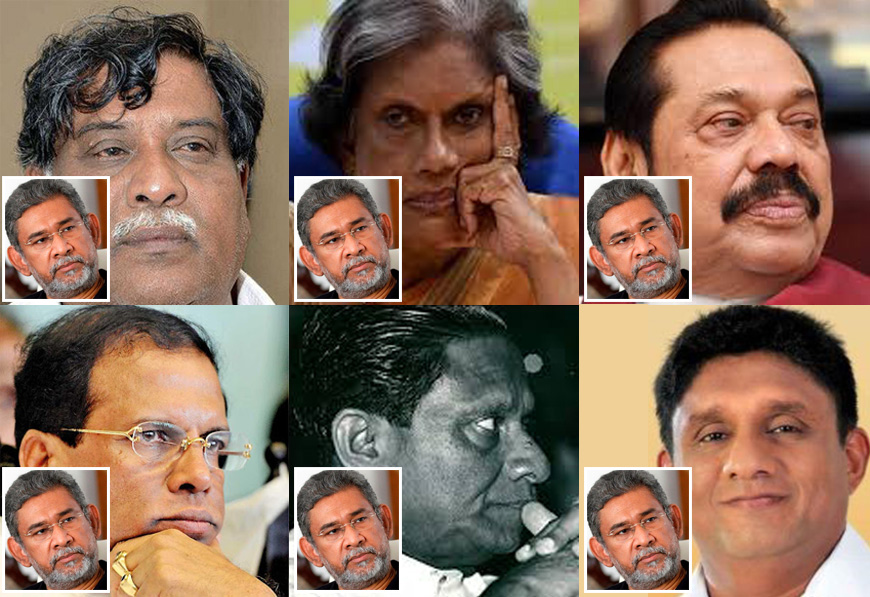 What psychopathology does opportunism precipitate to have supported the one post-Independence leader who curated the worst horror the country has seen, and can then call other leaders names like ‘right-wing’ and ‘dictator”? Has he forgotten that under his gaze, or rather his beloved leader R. Premadasa’s watch, tens of thousands were murdered and tens of thousands more physically and mentally maimed and/or imprisoned?

Dayan Jayatilleka’s latest screed refers to Sri Lanka as an “island” about to be imprisoned. Calling Sri Lanka an island was a favorite of English officials, soldiers, and merchants, who confined to the Colombo Fort, saw the country only as a quick investment, as a plantation, a fleeting posting and port of call. Perhaps Dayan didn’t know the politico-historical meaning of the word island. Heck, his rants and raves sometimes make us wonder if he knows the country at all! Anyway, the idea of the English officials, soldiers and merchants was and is to deny Sri Lanka’s coherence as a historically continuous geographically contiguous centripetal polity needing an equally long-term perspective and investment.

Dayan too thinks the country requires no such honor. It must be brought to heel. For him, like his supposed nemesis, Ranil Wickremasinghe, Sinhala and Buddhist are demons to be exorcised, the moment they dare raise their collective heads.

What is Dayan’s current job? He scurries from one ‘quadrangular’ embassy to another, trying to rouse the cavalry to go hunt down another native. To do this must he clothe himself in all the fake raiment of a Eurocentric philosophical pandemonium. A Hobbes here, a Locke there. Does he know that Locke, the so-called father of liberalism, was a white supremacist who traded in African bodies and upheld the notion of a master race?

We don’t know if it’s his job, but Dayan certainly seems to be working overtime to ensure imperialism’s current ploy will be done: to split the Rajapakse family in the hope that this and this alone will pave the way for a Sri Lankan Uncle Tom to assume power. Attempting to replay a Vijayaba Kollaya redux, he amplifies impending threats against the country via a compromised UN, and a hyena-chorus of the so-called Core Group, which includes members of a fast fascistizing Europe and its white-settler satellites.

The US and their allies are also busy buying off sections of the ruling party, while grooming ‘pretenders’ to the throne, as they once did throughout their assault on the hill redoubt of Sinhale. This again is their job as world-robbers, but why is Dayan so firmly in their bosom?

Even as Dayan claims to abhor the NGO civil society neo-liberals, he joins those dollar dole-bludgers and Euro-peons from the CPA’s Pakiasothy to Keell’s Radhika to failed assassin Uyangoda, calling for ‘resistance’. Pakiasothy even invokes the cry “No Passaran” of the anti-Franco forces of the Spanish Civil War, when his conduct now, funded as he is by NATO, would put him firmly as an appeaser of the falangist Generalissimo.

DJ calls Mahinda a peon to a monarchic President (using his hero Prema-Senior’s reference to himself in relation to JR. This was while Prema was helping to spark the wars that commenced north and south, from July 1983 through July 1987, to gain ascendancy over JR, while other contenders from Upali Wijewardene to Lalith Athulathmudali ‘passed away’.

DJ then laments the lack of a diffuse distribution of power at the top, even as he acknowledges the need for an executive Presidency. Does he honestly believe that a human can singly rule, that a Modern Prince can rule today without a powerful collective leadership?

Why resort to tired orientalisms like despot and dictator, spewed by blanched NGOcrats?

Was it not Dayan who once recalled that Comrade Joseph Stalin on the eve of the one of greatest battles the world has ever known, pitting the USSR’s Red Army against a Nazi horde, called up the names of not just Marx and Lenin but also that of the great saints of Russia?

DJ instead calls down his other extra-continental sponsors in Washington via “the Founding Fathers of the USA” who he claims “fought a revolution and liberated themselves from monarchy (‘Mad King George’).”

For all the ‘erudition’ painstakingly laid out by name-dropping, he has not been taught that the so-called US Revolution in 1776 was in fact a counter-revolution to not just continue chattel slavery but to accelerate the genocide of the original Americas, invading lands west of the Appalachians.

A startling new book, “The Counter-Revolution of 1776: Slave Resistance and the Origins of the United States of America” by Gerald Horne recalls that Africans then living in the colonies overwhelmingly sided with the English, against the slave-owners, North and South!

Here is a Dayan, who once rightly extolled Comrade Joseph Stalin’s leadership to a Soviet Union, under fire from all sides, now playing a perfidious Krushchev, withdrawing his missiles from pointing at the belly of the beast.

Does not the Sri Lankan state, after facing erosion from all sides for decades if not for hundreds of years, require a powerful leadership that can draw the needed millions together. Especially at this extraordinary hour?

Pitiful then is his resort to pop psychology, Hollywood fantasia and supposed Washington power plays, where a corrosive Condoleeza and a powerless Powell are presented as “alternatives’ to Rumsfeld and Cheney, rather than mere Blackface for nasty white boys.

Pity it is, that what animates his invertebrate slithering, from a Perumal to a Prema to a CBK to a post-offering Mahinda to a post-offering Maithri and now to a vapid and feudalistic Sajith, is a good old fashioned careerism, a posting for a post-modern posturer, banished in the wilderness, who has clearly lost not just the plot, but the grand metanarrative for human liberation.