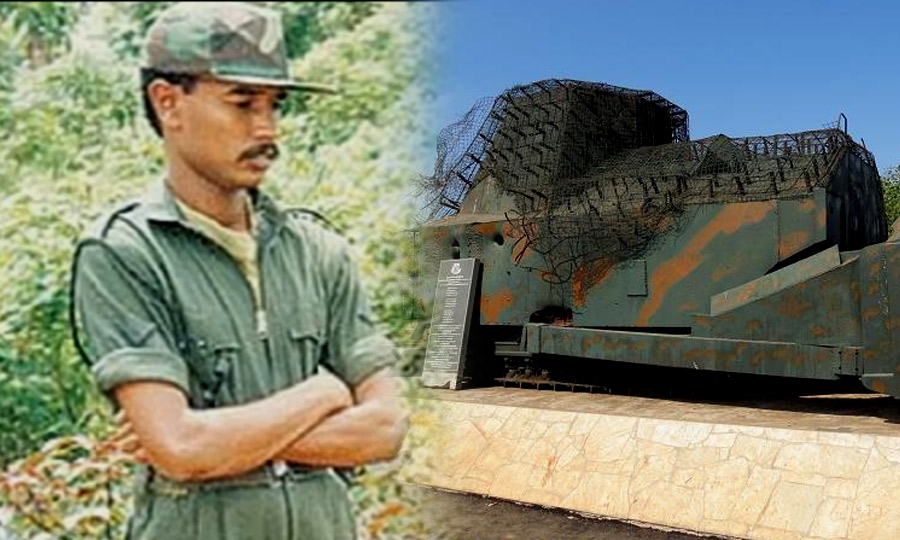 Had he lived, this man would be approaching his fiftieth birthday. Ordained at an early age, he took the name “Mahiyangane Dhammajothi Thero”. He was not yet 21 when he survived a brutal terrorist attack. He was dead at the age of 25. This was written five years ago and published in the ‘Daily News’ under the title ‘There are many ways to stand up, a man called Gamini reminded me’. Today, exactly 25 years after this extraordinary individual died, it it worth recounting a very special life and for many reasons and ironically a very special death, even as we note that heroism is not the preserve of any community or group and that the intentions and ideologies of political entities should not detract from the courage of such people.

Anniversaries are for remembrance. We note certain anniversaries because they are significant. We note them because life overtakes incident and in that inevitable movement we not only forget moment and personality but lesson. There are ‘days’ dedicated to fathers, mothers, lovers, the earth and water. They make no sense to me. They are realities though. Some days, however, cannot be moved around at will. Birthdays, for instance. And death anniversaries.

Landmark days are good for remembering, I admit. Newspapers remember such days and it is good they do. Still, there are times when I feel we ought to remember randomly and collectively.

A little over a month ago I wrote about the Arantalawa Massacre. Saffron robes turned chillie red that day. Thirty three bikkhus were murdered and four civilians too. Three bikkhus sustained critical injuries and one of them was permanently disabled. Among them was Ven. MahiyanganeDhammajothiThero, then a young bikkhu just 21 years of age.

He was born in the hamlet of Hasalaka to a farming family. He was the second son of S.G. Babanis and S.G. Juliet. It is not known if the renunciation of worldly things or poverty-related reason made him join the Buddhist Order. It is known however that the Arantalawa Massacre and witnessing the brutality of terrorism had persuaded him to disrobe. The community had to be defended before it could be educated in the Word of the Buddha. He left the Order with the blessings of his teacher and Chief Thero. He joined the army.

He was attached to the Sinha Regiment, Sixthe Battalion as a rifleman. On the night of July 10, 1991, some 5000 LTTE cadres surrounded the Elephant Pass garrison. He was one of the 600 soldiers tasked to defend this gateway to the Jaffna Peninsula. The LTTE attacked, the soldiers defended. Routine. What was extraordinary was a bulldozer covered with armour plates and chockfull of explosives rumbling towards the Southern entrance. None of the soldiers were prepared to meet this threat. Except one. The gunfire and explosions would have been deafening and disconcerting. The boy from Hasalaka was however calm. Purposeful. He took two grenades, ran towards the oncoming tank, took the hits from bullets fired at him, climbed the ladder and tossed them inside. The tank exploded. The assault ended. Lance Corporal Gamini Kularatne died.

Thousands more were destined to die, on both sides. Thousands of civilians too. Wars are not about innocence or guilt, after a certain point. All that remains are memories of those who did not arrive in a land called ‘Peace’ and thanksgiving for what we have. I wonder how many people associate the 10th day in July with a child who joined the Buddhist Order, witnessed and survived one of the most brutal attacks carried out by the LTTE, left to defend community and nation and sacrificed his life in the most heroic fashion. At some level, it is perfectly alright not to remember. At some level we should not forget. We should remember to offer merit to Gamini and others.

At some level we should recognize heroism and erase from mind and heart the identity markers of the heroes and heroines.

I remember a Nanda Malini song: Mugurak avesi thena mugurak (a club when a club is needed). It is about there being a time to engage in reflection on the eternal verities and a time to stand up and defend against threat. Most importantly, it reminds us that once war is done, a society would do well to return to the reflections that were temporarily abandoned.

This is why we still remember, more than two millennia since it happened, the request made to King Dutugemunu by one of his yodayas (i.e. one of the ten generals endowed with extraordinary strength and skill), Theraputtabhaya. He wanted to join the Buddhist Order. After many please and several refusals, the kind relents and the soldier proceeds to acquire the margapala on the path to enlightenment.

At some level there is no point wondering what Hasalaka Gamini would have done had he been alive on the 19th of May, 2011, i.e. long after the fighting was finally done. Or on July 14, 2021 for that matter. The more pertinent question is what we, who survived in large part to the sacrifices of the likes of Hasalaka Gamini, should do.

Hasalaka Gamini was confronted by an armoured tank that threatened to destroy a garrison and take the lives of hundreds of his comrades. He embraced both tank and death. We are confronted by one another, unarmed but endowed with fears, doubts, suspicions, history and version and an open but tortuous road. There is an embrace that was not in the script on July 10, 1991. We make our histories in circumstances that are not necessarily of our making. Hasalaka Gamini did. Twenty years later, we are making history too in circumstances that are far less forbidding that those which Hasalaka Gamini had to inhabit.

Have I done justice to the memory of a child born into a poor farming household, who saw with his own eyes 33 of his fellow-bikkhus being slaughtered, disrobed to defend the country and embraced death so I could at this moment be sitting here, writing this? Have I stood up? I wonder. Do you?