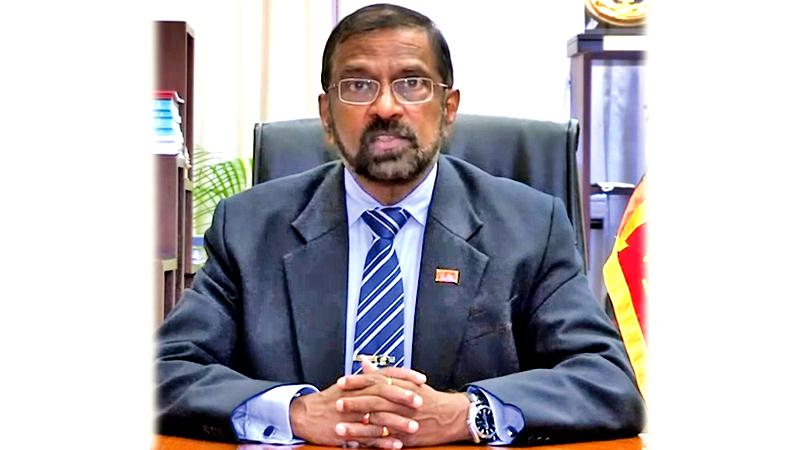 Q: As far as Sri Lanka is concerned what will happen at the upcoming UNHRC sessions beginning late February?

In 2015 we co-sponsored a resolution 30/1, which is detrimental to Sri Lanka as a sovereign nation. Then again in 2018 and 2019, roll over resolutions were passed. In 2021 March, the term of this 30/1 and subsequent resolutions come to an end. The High Commissioner has to submit a report to the UN General Assembly. It could end there.

But Sri Lanka’s Core group Canada, UK, Germany, Montenegro and Macedonia are mooting a new resolution on Sri Lanka. We have to battle it out. Now we are planning our strategy for the upcoming session.

The 30/1 resolution referred to alleged excesses in the final phase of the battle against terrorism in 2009. The latest report by the UN High Commissioner for Human Rights refers to last year. It says, during the past year there is a negative trend. Last year was consumed by Covid-19. We did not have an effective government until the general elections in August 2020.

The Government has been in office only five months. In this backdrop, the UNHRC must be fair and just in their reviews. This government was elected with a resounding people’s mandate, and has a two-thirds majority in Parliament.

Q: Despite winning the battle against terrorism more than a decade ago Sri Lanka is yet to win the battle with the international community?

When you look at the world, Sri Lanka is much more peaceful than any other country. We feel the regional body is applying double standards to Sri Lanka. It shows the hypocrisy of the West. But we want to engage with the UNHRC. We have made certain pledges in Geneva. We will meet those pledges.

As promised in Geneva last February the President appointed a Commission of Inquiry last week.

We are continuing with the Office of Missing Persons (OMP) and Reparations as well as the Human Rights Commission of Sri Lanka (HRCSL).

Reparations have been paid to a large number of people. Independent institutions are continuing, in such a situation, we feel we are being targeted due to the bidding of certain powers in the world body.

Q: Do you think your voice will have a fair hearing from member states?

At the upcoming sessions we want to present our position clearly to the UNHRC and to the international community and explain that this is grossly unfair.

But we are doing everything within our means to work with them. Sri Lanka endured a terrible battle against terrorism for 30 long years. The Security Forces did not fight in a vacuum. The government actually executed a constitutional mandate, to protect the lives of the people. Since May 19, 2009, there had been zero deaths due to terrorism until the Easter Sunday bombings in April 2019.

Earlier, on an average, we were losing 250 lives per month due to terrorism. This number included Sinhalese, Tamils and Muslims.

Now we have protected the right to life of all communities. I think the international community should congratulate Sri Lanka for eradicating terrorism. The LTTE is still banned in over 30 countries. Sri Lanka is being targeted unfairly over human rights allegations.

In Sri Lanka LTTE was wiped out but remnants of the outfit is scattered world over and it has not denounced violence. These players still raise funds and carry forward their ideology. They are supported by certain opposition political parties and politicians in Sri Lanka as well as former diplomats.We are a sovereign independent country. The international community should respect that.

Despite the fulfillment of our commitments they have said there is a dangerous trend last year that infringes on human rights. This type of country specific, selective targeting is wrong.

Q: In Canada and the UK, LTTE sympathetic diaspora exert huge pressure on their governments through elected representatives in Tamil dominated constituencies. How would you address this factor?

This is very unfortunate. The Tamil diaspora sympathetic towards the LTTE has become a sizeable vote bank for politicians in those countries. These people have become citizens of those countries and are enjoying voting rights. In any country politicians go for votes. Those politicians become the mouthpiece of that vote base. Besides, this particular vote base has a lot of money. Through terrorist financing they have amassed huge amounts of money by force, and have invested this wealth. With that money they can buy politicians, lobbies and opinion makers. We have to face it.

We have to ensure that we continue to have peace in the country and ensure that we don’t have any ethnic disharmony or discrimination. Then no one will have ammunition to target us. We have launched a mega development drive covering five points – livelihoods, health, education, housing and security. We will ensure that everyone irrespective of their ethnic , religious or other differences, will be ensured all these basics.

Q: The President has appointed a Commission of Inquiry? What is the purpose of this Commission?

When our Foreign Minister went to Geneva in February 2020, on President Gotabaya Rajapaksa’s directive, he made a pledge that we will appoint a Commission of Inquiry headed by a Supreme Court Judge.

Their mandate will be to study the HR allegations and findings of all past commissions to make recommendations to the Government on a possible means of closure which will be time bound. Therefore, the Commission of Inquiry will have a purpose to find solid answers within a reasonable timeframe. We are honouring the pledges we made. We wanted to appoint this commission soon after returning from Geneva but the country and the world was gripped by the Covid-19 pandemic.

Parliament was dissolved to make way for elections in March 2020 but, the pandemic pushed it back further by months, and there was no proper government to take the Geneva process forward. After the election in August 2020, the Government had to focus on the delayed Budget, and the Commission had to be approved through a proper Cabinet procedure.

Q: The current US president had reportedly promoted to cabinet rank, the former US Ambassador to Geneva Samantha Power who was the key figure behind the 30/1 resolution against Sri Lanka. Do you think relations with the new US administration will be rough going by these signs?

The US is currently not in the UN Human Rights Council because the former US President Donald Trump withdrew from the world body calling it a ‘cesspit’. We would not know if the US will re-enter, but they can certainly exercise power through their allies.

In keeping with the President’s policy, we want to maintain cordial relations with the US. I think the US should engage with Sri Lanka constructively. This is my hope. Currently the country is inundated with issues of their own. They must bring back democracy, human rights and do away with, racial discrimination.

Q: Has there been an invitation to the Government by the Sri Lanka Core Group to agree to another consensual resolution to be moved at the upcoming sessions?

The Core group through their representatives here has indicated to us that they would like to have a consensual resolution that would give us another year to implement Human Rights commitments. We have conveyed that if we are to agree to that the text of the resolution should be drafted jointly. We are now waiting to see the text of the new resolution.

Once we see the text, the policy makers will take a decision.

Q: Have you begun lobbying the international community to support Sri Lanka’s stance in Geneva next month?

Yes, we are discussing with like-minded members especially, in the southern bloc. But generally, we are engaging with everyone in the Human Rights Council. We have always rejected country specific resolutions. That has been our stance throughout.

Q: Is there a fresh move to refer Sri Lanka’s allegations to the International Criminal Court (ICC) or a Hybrid Court with foreign judges and prosecutors?

This is something the LTTE diaspora has been clamouring from the Human Rights Council. This call is pushed by some of our Tamil politicians as well.

They want Sri Lanka to be punished or blacklisted but it is not going to be easy. We have not committed crimes against humanity, genocide or mass murder. There is absolutely no evidence to support their claims. Our fight was against terrorism.

Successive governments in Sri Lanka since 1983 have engaged in ceasefire agreements, negotiations and peace talks aimed at a negotiated settlement.

Every time it was the LTTE who pulled out of peace talks and violated the ceasefire agreement. They used the negotiations phase to re-group, retrain, re-arm and once again carry out dastardly acts against civilians.

When all attempts failed the Government decided to defeat the LTTE militarily in 2009. That is the constitutional mandate of a democratically elected government. It was actually a humanitarian operation fought against a most ruthless terrorist organisation in the world, identified by even the US’s Federal Bureau of Investigation (FBI).

Q: Is it possible to refer Sri Lanka to the ICC based on the current allegations?

It cannot go through UNHRC, it has to be via the UN Security Council. The Human Rights High Commissioner can make a recommendation to the UN Secretary General. But our position is very clear and we have made an effort to engage with the HRC constructively. Our friends and likeminded members in the international community have been made aware of the ground realities and they have pledged support.

Q: The main allegation against the military forces and the government is that over 40,000 civilians died in the final phase of the battle.

This figure is highly exaggerated. There are UN reports which have mentioned civilian casualties as 7,000. There are conflicting reports about the casualty figure, in the final phase of the humanitarian operation.

We must not forget the fact that the LTTE used 300,000 innocent Tamil civilians at gunpoint as a human shield. They even shot at the people who tried to escape. Their artillery guns were positioned among the trapped civilians. The blame should be directed at the LTTE as the perpetrator.

It was not the Security Forces which flouted the international humanitarian law. The Forces should be congratulated for saving the civilians and wiping out terrorism that plagued our country for 30 years. It was not fought against a vacuum. What we faced in 2009 was a fully blown battle against terrorism.

They had the widest terrorism financing, money laundering, gun running and human smuggling network which was a threat to even the other countries.

Q: The international lobby backed by the LTTE remnants has been very strong. Do you think it has grown in the past years?

I think it has grown. The people who have migrated overseas, to the west especially, are now settled there. Some hold influential positions in the society.

Their number had multiplied. One of the disturbing trends witnessed lately is to indoctrinate the younger generation in the LTTE ideology and violence. Even very small children are made to participate in LTTE protests.

During their November celebrations in the UK, a two-year-old girl was draped in an LTTE flag. Their blood red flag depicts guns and bullets. It glorifies terrorism. The UNICEF charged the LTTE for using child soldiers.

Foreign Minister Dinesh Gunawardena raised this issue with Colombo based diplomats and they have promised to convey the message to their respective capitals for action.

The British police are also investigating the incident where the LTTE supporters projected symbols of the terror outfit on the walls of parliament last November. The LTTE still remains a listed terrorist organisation in the UK.