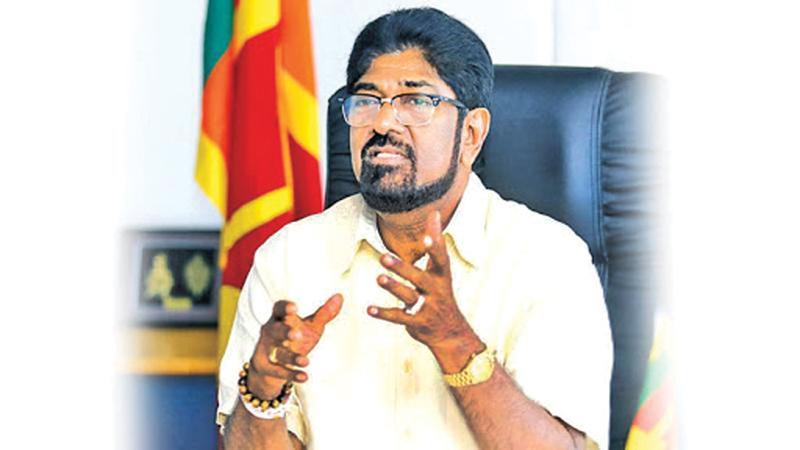 Co-cabinet Spokesman and Mass Media Minister Keheliya Rambukwella said the Government is ready to successfully face the alleged human rights violations in the final phase of the battle against terrorism and consequential developments at the upcoming United Nations Human Rights Commission (UNHRC) sessions in Geneva.

The Minister in an interview with the Sunday Observer said, “we are quite aware that many of those allegations are fabricated and unwarranted as that was not the real situation in the North and the East. So, we stand by the right thing and the real activity that took place.” Minister Rambukwella said the position of our Government up to 2015 was presented to the UNHRC.

Unfortunately, with the change of Government in 2015, the then Foreign Minister Mangala Samaraweera co-sponsored the UNHRC resolution 30/1 with the United States even without getting the approval of the Cabinet or Parliament. We completely refuse to accept that resolution. That is the only instance in the whole world where a Foreign Minister went to the UNHRC and said we had committed crimes.

A: The Government has the sole authority to decide whether to accept or reject the UNHRC Commissioner’s report. Always our position was that we were tackling the real issues. We feel that the entire thing has been completely blown out of proportion and exaggerated to an extent to accommodate the requirements from various other quarters.

We are of the view that if they are talking about the last two weeks of the battle against terrorism, then it had been there for 30 years and atrocities and heinous crimes had been committed during this period. In the aftermath of the battle against terrorism, we had also decided that a local mechanism would be in place to ascertain whether there had been any human rights violations. We still consider that a local mechanism is quite adequate to meet this requirement.

At the same time, the position of our Government up to 2015 was presented to the UNHRC. Unfortunately, with the change of the Government in 2015 then Foreign Minister Mangala Samaraweera co-sponsored the UNHRC resolution 30/1 with the United States even without the approval of the Cabinet or Parliament. We completely refute that resolution.

That is the only instance in the whole world where a Foreign Minister went to the UNHRC and said his country had committed crimes. That resolution was presented and co-sponsored by the US. However, later on the US pulled out after its representative made a very devastating statement at the UNHRC. Actually, that would have been the most opportune time for us to withdraw.

Unfortunately, the Yahapalana Government didn’t have the spine to do that. I must appreciate the position taken by Tilak Marapana who was also a Foreign Minister of the Yahapalana Government when he promptly addressed the UNHRC and said that some of these concerns are not in keeping with the Constitution of Sri Lanka. At least I must appreciate that because even if he was in the other political camp, he had the courage to make that statement.

That also synchronised very well with our thinking. As far as we are concerned, we are not just gullibly going to take everything that has been thrown at us from the diaspora and various other quarters to fulfill their own political compulsions. That is where we stand.

Q:Will the UNHRC resolution 30/1 have any adverse impact on Sri Lanka at the forthcoming UNHRC sessions?

A: I won’t rule out anything because their lobby is very strong. However, we look at it as a challenge and we will do our utmost best to meet that challenge. Still we are experiencing the results of former Foreign Minister Mangala Samaraweera’s decision to co-sponsor the US-backed UNHRC resolution 30/1. As I mentioned earlier, Tilak Marapana, who was also Foreign Minister in the same Yahapalana Government after Mangala Samaraweera was able to clearly state at the UNHRC that some of the conditions imposed were contradictory to the Constitution of Sri Lanka.

He told the UNHRC that as a Government we are committed to ensure the sovereignty of the people of the country adding that we have to think about the constitutional provisions and the sovereignty of people when responding to this resolution.

Q: Is the Government ready to successfully face the alleged human rights violations in the final phase of the battle against terrorism and consequential developments at the upcoming UNHRC sessions in Geneva?

A: We are quite aware that many of those allegations are fabricated and unwarranted as that was not the real situation in the North and the East. So, we stand by the right thing and the real activity that took place.

Q: The Cabinet of Ministers on February 1 decided that the East Container Terminal (ECT) of the Colombo Port will be operated hundred percent by the Sri Lanka Ports Authority (SLPA). Could you explain?

A: There was a long battle for that. In 2017, the then Minister Malik Samarawickrama signed a Memorandum of Understanding (MoU) with India. Subsequently in 2018 again, then Minister Sagala Ratnayake also signed a MoU with the Indian Government. So, we were saddled with that.

The kind of opposition and agitation that are there with the trade unions and the political compulsions has to be considered. We also understand the geopolitical situation and various other things.

We believe our international relations and bilateral ties with India is at its best. These are issues which we can discuss and come to a settlement. Each one has to consider their own political compulsions and the pressures that are exerted.

Therefore, we have considered all those aspects and we believe India, being our neighbour and closest friend, we could always come to an understanding to look at an alternative.

Q: The Indian High Commission in Sri Lanka has asked all sides to abide by the existing understandings and commitments of the trilateral agreement signed in May, 2019 with India and Japan to develop the ECT during the tenure of the Yahapalana Government. Your comments?

A: While giving our utmost respect to international relations, there are also local political compulsions that have to be considered. We are very certain that the Government of India will understand our position and the political compulsions that are imposed on us. I am sure the Indian High Commissioner would have also witnessed that with his own eyes. Hence, I am sure we would be able to talk to them and come to a reasonable understanding.

Q: Some port sector trade unions have also expressed their opposition to give the West Container Terminal (WCT) of the Colombo Port to any foreign country. Would you like to comment on this?

Q:The Opposition alleges that the Government is using the report submitted by the Commission of Inquiry of Investigating Incidents of Political Revenge to witch-hunt its political opponents.

A: At least they must understand the fact that they had an office operated in the Temple Trees under the leadership of former Prime Minister Ranil Wickremesinghe and participants such as Anura Kumara Dissanayake and Patali Champika Ranawaka were used to fabricate cases and imprison their political opponents.

The Attorney General’s Department also participated in it and some of the prominent persons of the AG’s Department were paid by Temple Trees. That is the kind of thing which could be described as witch-hunting.

At present an independent commission has been appointed and it has gone through whatever the allegations and some other submissions and made some recommendations. So, we have to make a clear comparison on the situation of former and present Governments.

Q:Recently the United National Party (UNP) Chairman Wajira Abeywardana told the media that the Government has failed to bring the culprits of the Central Bank bond scam to book. Your comments?

A: The fact of the matter is the perpetrators themselves are now shouting because they know there are certain areas that they too will have to be answerable.

Q:The Ceylon Workers’ Congress (CWC) says that despite the Government’s decision to increase the daily wage of estate workers to Rs. 1000, some plantation companies have attempted to sabotage it. Has the Government looked into this issue?

A: We are very firm on that. Prime Minister Mahinda Rajapaksa as the Finance Minister made a commitment in Parliament. So, we will fully abide by that decision.

Q: The final report of the Presidential Commission of Inquiry (PCoI) into the Easter Sunday attacks was handed over to the President recently. Will the Government initiate legal action against the culprits based on the recommendations of the Commission without any delay?

A: Of course. It is a very sensitive area. The idea of appointing a Presidential Commission was to take whatever action necessary thereafter. So, we will have to follow the recommendations of the Commission report and that will be dealt with.

Lots of information that the people were not aware came out of the Commission. I hope something positive will happen and the perpetrators will be brought to book.

Q: The Youth Wing of the Samagi Jana Balawegaya (SJB) on February 01 lodged a complaint with the Bribery Commission over an alleged sugar fraud and demanded a full-scale investigation into it as it had cost the Government over Rs.11 billion. Your views?

A: The Commission will look into this. The Commission is a part of the Government in the sense of administration. They had lodged a complaint on February 01.

They must relook at the complaints that we made against the crooks during the tenure of their Yahapalana regime but nothing happened. I am sure this matter will be taken up and an inquiry will be held.

Q: Do you think the UNP will ever reform under a progressive leadership and project a more acceptable image to the country?

A: There is hardly any difference between the UNP and the SJB. They are two factions of the same party. Their future appears to be bleak. They are very aggressive and come out with some hilarious issues but they are not marketable yet in the ‘political arena.

Q: It seems the Opposition does not want to cooperate with the Government even in an island wide emergency such as the Covid-19 pandemic. Your comments?

A: They are a desperate lot who have been completely rejected in a strong manner, perhaps, the strongest in the history of local politics. All their acts are due to desperation. When you act in desperation you have to expect futile exercises such as protests and so forth.

Q: At present the human-elephant conflict has reached an alarming level and the people in the affected areas are protesting to provide a lasting solution to the issue. Has the Government drawn up a plan to address this issue?

A: Absolutely. We have taken the matter up in a serious manner. That is why the Minister in charge is also very much concerned about it. Definitely, we would be able to see some kind of concrete solution to the human-elephant conflict in the near future.