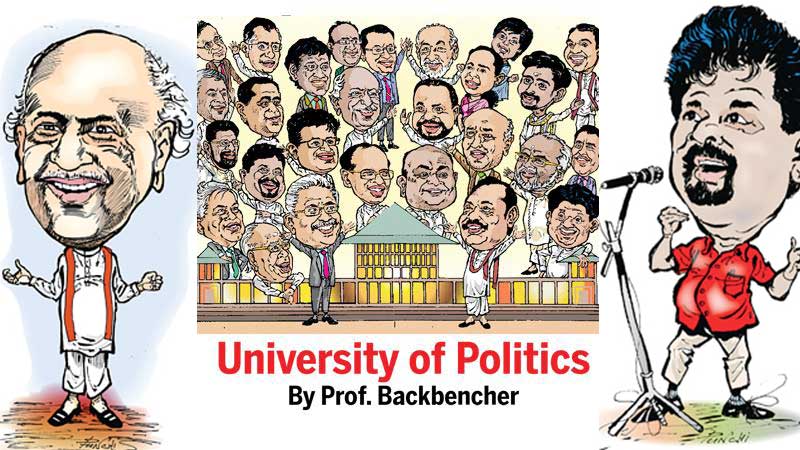 Foreign Minister Dinesh Gunawardena told Parliament that the Government remains committed to protect those who have made immeasurable sacrifices to neutralise terrorism, protect the territorial integrity of the country and to regain for all people in Sri Lanka the most cherished of all rights, right to life. He said despite the vote of the UNHRC Resolution against Sri Lanka, the country will pursue its domestic mechanisms aimed at bringing about reconciliation and a lasting peace.

The Minister said Sri Lanka will continue to engage constructively with the UN and its agencies in the same spirit of cooperation that have stood for over six decades despite the UNHRC adopting a resolution on Sri Lanka.

Minister Gunawardena said, however, the Resolution against Sri Lanka was pushed forward at the behest of a few countries, representing one part of the world without the consent of Sri Lanka. “Therefore, it is unhelpful and divisive. There is no moral right to interfere into affairs of a sovereign country in this manner.”

Minister Gunawardena said that no country has a greater interest in bringing about reconciliation among its peoples than Sri Lanka – a point that has been repeatedly emphasised during proceedings of the Human Rights Council. He also said that Sri Lanka considers the draft resolution to be unwarranted, unjustified and in violation of the relevant Articles of the United Nations Charter.

President Gotabaya Rajapaksa said, “Media freedom does not mean freedom of media owners. Certain media owners wish to run the country the way they want and I cannot allow that to happen.”

The President who was participating in the 15th “Discussion with the Village” program at the Walapane Divisional Secretariat Division of the Nuwara Eliya district, said he has not exerted any influence on the media as the President, and he will not hesitate to take legal action against such groups, if they attempt to push the country and the people backward, by abusing media freedom for the benefit of various groups and individuals.

President Rajapaksa said that today a group of media persons who had worked against the country during the battle against terrorism has reappeared and through their media institutions are attacking nationalist ideology and programs. He said, “The majority of voters elected me as the President to rebuild this nation. Only 16 months have passed out of the 60-month long mandate. There is still considerable time ahead. Some are worried about the next President. No one should worry in this regard as it is people’s choice.”

Divergent views were expressed in Parliament on Friday (March 26) by the Government and Opposition lawmakers during the Adjournment debate on the report of the Presidential Commission of Inquiry (PCoI) that probed the Easter Sunday attacks.

Speaking during the debate, National People’s Power (NPP) Leader MP Anura Kumara Dissanayake said all politicians of the former Yahapalana Government should be held responsible for the Easter Sunday attacks. He said that the former Government in its entirety ignored the extremism that was budding within the community to fulfill their personal and political agendas. He said a number of groups have held press conferences and stated that the Commission’s report had shortcomings.

“Some parts of the report contained accurate information, whereas others have incorrect conclusions based on correct information — and information that has been distorted. However, it is undeniably evident that crucial information regarding the attacks has been swept under the carpet,” he said.

Former President Maithripala Sirisena told Parliament that none of the witnesses interviewed by the PCoI had said that he was informed of the attacks beforehand. Former President Sirisena had said that the day after the attacks, a Minister said he knew about the attacks beforehand and added that several others also said the same later on. “This proved their hatred towards me. Even the media played a role in damaging my image by distorting my statements.”

Responding to former President Sirisena’s claim, SJB Parliamentarian Harin Fernando told Parliament former Prime Minister Ranil Wickremesinghe had no prior knowledge of the Easter Sunday attacks. Fernando said that former President Sirisena did not hand over the functions of the Defence Ministry to an Acting Minister when he went abroad. He said that conflict was a means for politicians to further their agendas. He said those responsible for the Easter Sunday attacks need to face justice soon.

State Minister Sanath Nishantha who joined the debate said the Easter Sunday attacks could have been prevented had the then Minister Harin Fernando informed the Security Forces what his father had known. However, without doing so, Fernando simply stayed at home allowing innocent civilians to fall prey to the attacks.

Tourism Minister Prasanna Ranatunga told the Parliament Opposition Leader Sajith Premadasa and the Opposition members act in a manner as if the Easter Sunday attacks took place under this Government and added that all Presidential Commissions, Parliamentary Select Committees and the Oversight Committee were appointed by this Government to investigate the terror attacks.

The Minister participating in the debate on the report on the PCoI said in the aftermath of terrorist activity such as in 1971, 88/89 and the LTTE terrorism, the associated persons were rehabilitated, but the Yahapalana Government did not do so. He said that the then Government members protected their Muslim members.

Minister Ranatunga said that the people had a notion that the then Government members were involved in this heinous crime. He said the PCoI report said that despite prior information by the intelligence, the then Government kept silent allowing the terrorist attack. He queried as to what Opposition Leader Sajith Premadasa, as a Minister and the Deputy Leader of the United National Party (UNP) did regarding that.

The Minister said that the majority of the members with veto power at the UN Security Council support Sri Lanka. At the weekly Cabinet press briefing, Minister Rambukwella said there is a great deal of discrepancy between the correct information and the truth and the information received by the Office of the High Commissioner for Human Rights (OHCHR).

He said that there is a big problem in providing credible information to the UNHRC, and there is a question as to how the OHCHR obtained the information.

However, the Minister said that preparations are being made to present the facts to the world in a very clear manner to defeat the misinformation campaign.

The Minister said the UNHRC has no legally binding power over states and any action such as targeted sanctions, asset freezes and travel bans, which were recommended by the OHCHR report on Sri Lanka against perpetrators of alleged human rights violations, will depend on individual countries.

Sri Lanka Podujana Peramuna (SLPP) Parliamentarians charged that Samagi Jana Balawegaya (SJB) Parliamentarians led by Sajith Premadasa and the Yahapalana Government were answerable for the extremists’ Easter Sunday attack, though they pretend not to be responsible.

At a media briefing at the party Headquarters in Nelum Mawatha, Battaramulla, SLPP Parliamentarian Jagath Kumara said that Opposition Leader Sajith Premadasa is pretending that they have nothing to do with the incident.

He said that when they were in power and did nothing to bring the culprits to book. He said the Government led by President Gotabaya Rajapaksa and Prime Minister Mahinda Rajapaksa arrested 99 people for the Easter Sunday attacks and legal action was being taken against them. MP Kumara said, “We have not made any effort to protect anyone. Opposition Leader Premadasa said that they were not involved in it. The Yahapalana Government including Sajith Premadasa should be held responsible for the attacks. We are not ready to protect the culprits.”

Minister of Agriculture Mahindananda Aluthgamage told the media that he would resign from politics if the Opposition proves President Gotabaya Rajapaksa is guilty of deforestation in the country. At a media briefing at the Agriculture Ministry recently, the Minister said, “Some media organisations and public figures have been paid large sums by NGOs to create a fake environmental crisis in the country for political gain.”

He said the Opposition and some organisations are doing this to earn money from international NGOs.” Minister Aluthgamage said all these allegations were targeted at President Gotabaya Rajapaksa as those parties wish to see his downfall. He said, “If there was environmental pollution and deforestation in Sinharaja, those who are living around Sinharaja will be agitated.”

Public Security Minister Rear Admiral (Retd) Dr. Sarath Weerasekera said that Ibrahim, the father of the bombers in the Easter Sunday attacks, was on the JVP National List and the JVP Leader was terrified of the statements he made during the investigation.

The Minister said, therefore, there is a suspicion that some members of the JVP accept Saharan’s views. Speaking to the media after religious ceremonies at the Maligakanda Maha Bodhi Temple to coincide with the 147th anniversary of the Police Department, Minister Weerasekera said according to a recent statement by former JVP Parliamentarian Bimal Ratnayake, the worshipers of idols are tribal people. Therefore, he said that since fundamentalists such Saharan are against those who worship idols, there is suspicion whether the JVP also shares such views.

The reorganisation of the United National Party commenced in Anuradhapura a couple of days ago chaired by party General Secretary Palitha Range Bandara. Former Parliamentarians Ashu Marasinghe and Saman Ratnapriya were also present. Former MP Ashu Marasinghe said that the party took the wrong directions after 70 years by fielding Maithripala Sirisena as the Presidential Candidate.

He said disciplinary action will be taken against those who quit the party. Marasinghe said, “Former President Sirisena thought only of himself. If he had thought of us and the party when he was the President, we would have still been in power.”

Former MP Saman Rathnapriya said that the UNP is a party that built this country, developed it and did not sell it. Therefore, the UNP has to rise again and there is no other option.