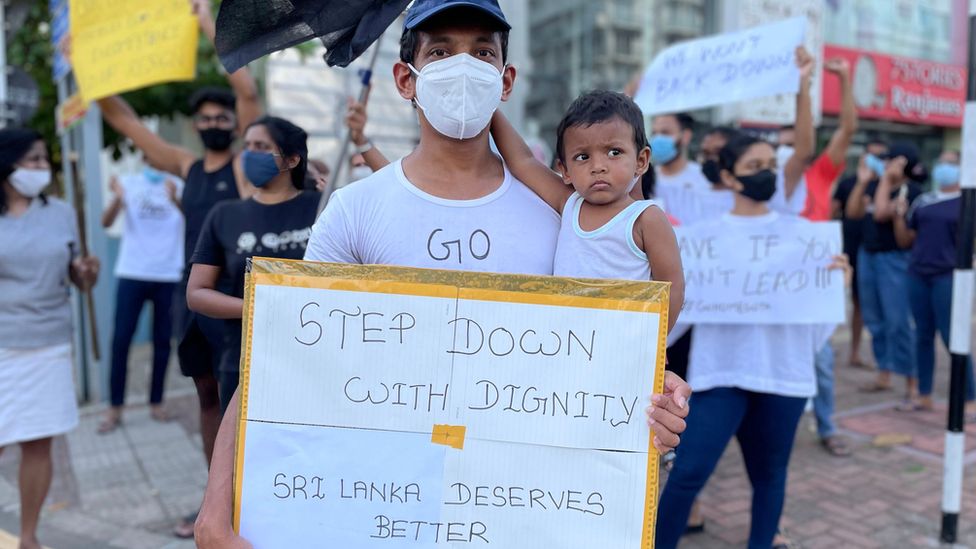 Can #GoHomeGota2022 be considered a real “Revolution/විප්ලවය” or is it a “Trend/රැල්ල”? Revolutions across history tell us that the term comes with certain preconditions. In other words, there are certain non-negotiable attributes associated with the term. This particular campaign has all the outer-trappings of a revolutionary surge, but some are justifiably skeptical. However, for easy reference, let’s refer to it as “Revolution/විප්ලවය”.

A slogan galvanized by an agitated population due to economic hardships, loss of hope over many reasons, sick of මජර politics, suppression and oppression alone doesn’t necessarily make it revolutionary. Revolutions are about overturning systems, in the true sense of the word. Regime-change that leaves system intact, for example, is a poor cousin of “Revolution @ විප්ලවය”. This slogan is not even about regime change, it’s about removing an individual from office. In this sense, one can argue, “#GoHomeGota2022” is essentially a “Trend/රැල්ල,” not a “Revolution/විප්ලවය”.

Let’s assume President Gotabaya does go home. What’s next ? What would be the options? Will it help bring Sajith, Anura, Patali, Sarath Fonseka, Ranil or Gamini Wijesinghe to power? Is that “revolutionary”? No. It’s just regime-change. None of the above mentioned individuals have ever expressed any desire to transform the economic, political and social structures to redress citizenship-deficits. If the key term is “system” then for all talk of “Revolution/විප්ලවය” it is is only a plan for a regime change? A පුටු මාරුව. Old wine in new bottles. However, if we really want “Revolution/විප්ලවය” in deeper sense, then we have to think of a new system. And if NEW SYSTEM is what we want then calling something that’s not even close to system-change a “Revolution/විප්ලවය” is not only silly, it can cause a lot of disappointment.

“Revolutions/විප්ලව” almost always is marked by a coherent ideology, a leadership, an organization, popular support and sustained activism and action. Sometimes it is useful to give the impression that it’s actually a popular uprising, that it is all spontaneous, leaderless but still has wide agreement on objectives etc., but in this case, as mentioned above, if it is a name-change and not “Revolution/විප්ලවය.” There should always be ends and means. “Ends” are easy. All it takes is to add a word or a string of words to a hashtag and you have it. “Means” are tricky. Some “means” will not give us the desired “ends.” Some means give us “ends” but they could be very different to what we started out to obtain.

(A) Ideology: what is the real ideology behind #GoHomeGota2022: just “Gota go home” or overall “System Change” or both? Is it about gas, fuel, bringing down the cost of living, bringing to justice the perpetrators of the Easter Sunday attacks? Is it to maintain the unitary state of Sri Lanka or to subvert it?

(B) Organization: Is this a revolution taking place in virtual space or physical space or both? Is there one organization or many? If there are many, are they all working together and in agreement? Is it because there’s no agreement that everything has been reduced to a slogan about a single individual and not about changing a system? If they did talk about system-change would there be agreement about changing what to what and how? Disorganization has its merits, but systems are formidable and are hard to bring down with slogans of the lowest common denominator type. Anyway, what do these organizations looks like? Do WhatsApp, Telegram, Facebook groups constitute revolutionary organizations? Is it the SJB, NPP, FSP or some other party? Do these parties share the same ideology? Do they share the same vision for Sri Lanka? If so, why can’t they dissolve themselves and forge a grand party?

(C) Leadership: Leadership means not really the one who is going to replace Gotabaya. Suppose he leaves, then who is the next leader of the country?Is it Pathum Karner from National Green Front, Wasantha Mudalige from IUSF or someone from Non-Partisan People’s Revolution ? If not, anyone from SJB, NPP, FSP, 43 Division?

(D) Followers : How many actual followers are there in this campaign. Is it all in WhatsApp, Telegram, Facebook groups or those who are online in such groups? Is it those who have changed their profile picture into Black Flags? Is it the people in gas, fuel queues, people stage protest in Galle Face, people sight-seeing in Galle Face or those who stay overnight in Galle Face?

(F) Sustainability: For how long can protestors sustain the struggle? For how long will the government survive? Who will prevail in the end in terms of strength, energy and resources? There are many unanswered questions in this “Revolution/විප්ලවය”.

This “Revolution/විප්ලවය” has some “ways” and “means” but apparently it lacks solid “ends”. This is the main problem of a campaign like this. When the “ends” are not clear or are blurred or simply reduced to a person-focused slogan, others with vested “ends”, specially with political “ends” can simply hijack the struggle. This is what the SJB, NPP, FSP, 43 Division are trying to do. They use the slogan of #GoHomeGota2022, the “trend” (which is their main political agenda as well) to maximize their own political campaign and trying to achieve their own political “ends”. They are trying to test their respective political strengths in the midst of this economic crisis. Those who participated in the protest march organized by NPP from Beruwala to Colombo did not come with a solution to present economic crisis. It was clearly to flex mussels and show their strength to both the Government an to the main opposition. The counter move by SBJ was the protest march from Kandy to Colombo. Will those political gimmicks solve the actual problem in the country? What happens for sure is that real apolitical struggle will ultimately get buried.

(A) Address the ideology or root causes of the conflict: This takes a long time. Some want total system change, some need to end of present political culture, some want to end of corruption. Addressing these demands takes long time. However, cannot the Government address immediate issues such as supplying of gas, fuel and end power cuts and thereby remove the immediate cause for agitation? Isn’t the Government trying to do this to some extend? If Government could suppy gas, fuel and electricity it will have the space to address the deeper issues.

(B) Dislocating Organizations: The disorganised nature of “Revolution/විප්ලවය” is also the reason for its dilution. Take the campaign in Galle Face as an example. There are Non-Partisan Protestors, elements of the NPP, FSP, IUSF, SJB, 43 Division, Retta, Motivation Appachchi, Sannasgala, ජනාධිපති බාප්පා, artists, professionals, ගීතිකා, යාතිකා, Born Again fundamentalists, බලි, තොවිල්, Secularist, LGBT groups etc. They are all in one place but there is no cohesion. Every group is fighting to reserve a space in Galle Face, own a tent and secure air time to market their voices. “Go Gota Home” is the only uniting slogan. No one knows what is after “Go Gota Home”. Each group may have their own objectives. Isn’t the Government letting it happen that way?

(E) Sustainability: How long can people could remain in the “Revolution/විප්ලවය”? Can they be fully committed despite their daily work and lives? Can they continue to be in protests with the cost of living sky rocketing, when the queues for gas and fuel keep getting longer? Suppose that gas, fuel and current supply becomes normal. Then what? Would they still want to be part of the “Revolution/විප්ලවය”? An average family man cannot afford to spend the entire day on the road. Then how about the donors ? For how long can donors provide water, food, medical and other supplies and services to people in Galle Face Green and elsewhere? Who gets bored and who gets tired first, the Government or the protestors ? Is the Government deliberately delaying a political solution until “Revolution/විප්ලවය”? Does the Government not feel that if nothing is done, then we could have very tragic outcomes?

So, if this “Revolution @ විප්ලවය” to become a success it needs to look at the full spectrum of “ends”, “ways” and “means”. Suppose “Revolution/විප්ලවය” won, the President and Prime Minister resigns , but there’s no political system in place. Wouldn’t we then get anarchy? Suppose “Revolution @ විප්ලවය” won with some political system in place. Who comes next: a collation Government, SJB, NPP or some new apolitical movement? Can we except total system change, zero corruption, 100% accountability? Who can guarantee how long will it take to recover the alleged “stolen money”? Unfortunately, corruption has become a culture from top to bottom in Sri Lanka. We are getting into a bus and give 30 rupees to bus conductor for 27 rupees ticket but he never gives us the change 3 rupees. We don’t ask him either. Doesn’t it amount to a corruption? The interesting thing is that the same conductor who didn’t give our change money and the passenger who didn’t ask the same are in Galle Face asking a corruption free Sri Lanka….!

We are yet to witness the actual casualties of this “Revolution/විප්ලවය”. We have to expect more casualties in all spheres, especially the economic one. Pressure from the “Revolution/විප්ලවය” or moves by the opposition may bring the present Government to its knees at some point, today, tomorrow or the day after. President may go, Prime Minister may go, new Government may come but system would remain unchanged.

So, whether #GoHomeGota2022 is a Trend (රැල්ල) or Revolution (විප්ලවය) depends on one thing: finding clarity when it comes to “ends.”