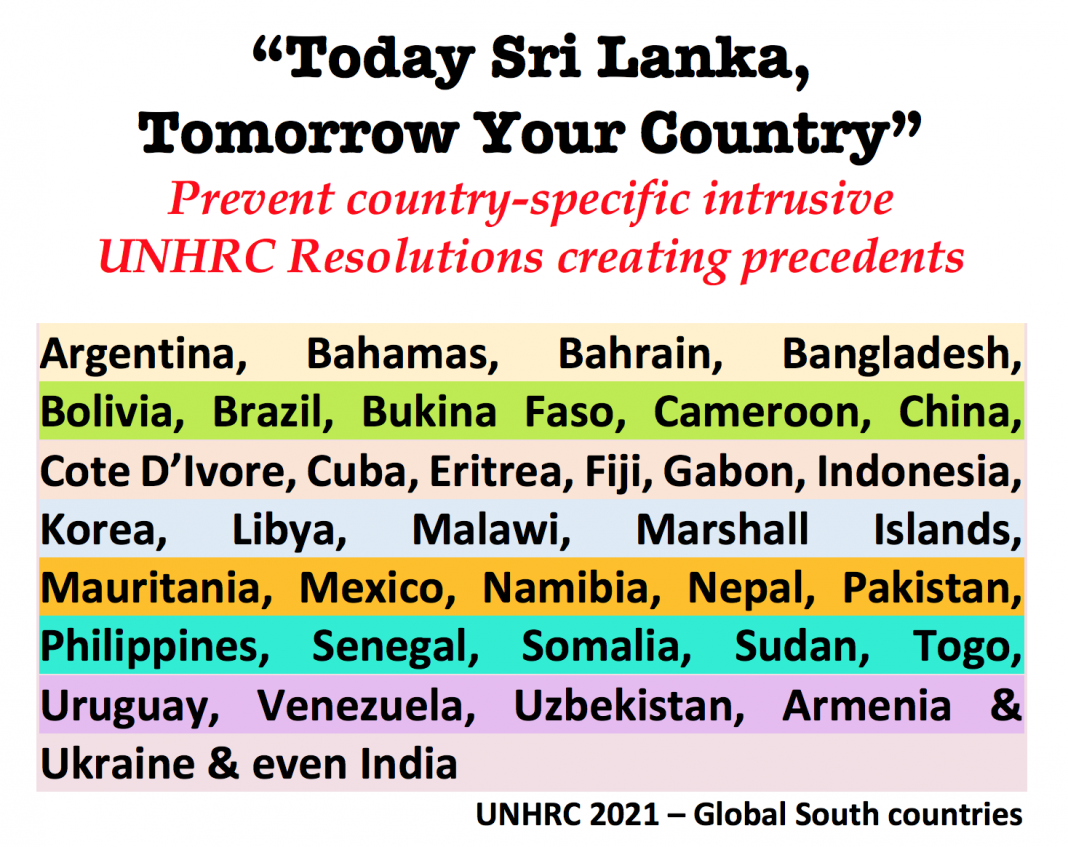 “Today Sri Lanka, Tomorrow Your Country”is the message that countries of the Global South must internalize from the intrusive nature of the OHCHR Report and unprecedented precedents attempted to take place via Global North backed Resolutions using the UNHRC as puppet. When UNHRC head boldly reads out reports condemning the national judiciary, the national laws, national mechanisms of Sri Lanka insisting they are replaced with international players, it is a stepping stone to doing the same to other countries. Geneva hegemony being created allowing Global North to master R2P must not be allowed by Global South nations.Sri Lanka’s conflict may be too confusing for nations to understand, but countries of the UN must protect their own country and not allow UNHRC precedents to take place. This means countries should vote against the Core Group Resolution on Sri Lanka or help Sri Lanka canvass for a closure. On Sri Lanka’s part, our delegation must request a Global South nation to seek vote on the Core Group Resolution when it is taken up & separately Sri Lanka must begin drafting a resolution of closure. Sri Lanka must not fall prey to attempts by Core Group to trickle down its resolution and present one of compromise!

UNSC sanctions nations based on violations of IHL and if countries are a threat to international peace.

No UNSC sanctions have taken place for violations of human rights!

If UNHRC can sanction nations and declare them war criminals based on selected nit picking of less than 10 unproven allegations for human rights violations, then the very countries drafting resolutions should be locked up by the World Court.

Look at the allegations by the UNHRC since May 2009 – majority of the allegations are post-conflict and based on hearsay by third party sources and brush stroke statements without evidence. The same names which are less than 10 gets circulated and printed over reports compiled by the same lot of NGOs funded by Global North foreign governments to create mischief.

All of the fundamental allegations completely overlook that it was the LTTE that herded Tamil civilians with them to be kept as hostages and human shields.

The UNHRC overlooks the fact that there is a major blur in distinction of civilians – LTTE had its own civilian armed force. So how many of these ‘civilians’ were actually civilians? The blur of distinction was confounded further as 1/3 of LTTE comprised child combatants – whether they were children, they were trained to kill and they did not qualify to be called a ‘child’ with gun in hand.

What the UNHRC completely overlooks is that the LTTE broke the rules of war by herding Tamils and firing from among them. This violation has to take precedence over the return of fire by Sri Lanka Armed Forces, which they had every right to do.

Then there is also allegation of not providing humanitarian aid – even this allegation can be put to rest by statistics and the fact that foreign envoys sat every 2 weeks since January 2009 to discuss the rescue operation and they had every opportunity to bring to the table any issues without waiting years after the conflict ended. The US and UK Defense Attache secret reports to their respective governments clearly showcases further distortions of successive resolutions.

What UNHRC totally ignores is that UN system did nothing to stop LTTE from 1980s to 2009 and only after Sri Lanka ends terror, UN is asking questions. Where were these questions when LTTE was killing unarmed civilian? UNHRC cannot forget there has been no LTTE terror for 12 years and kudos for that peace goes to Sri Lanka not UNHRC.

There is a well-funded campaign to hype accusations, create a campaign of lies and based on gun-boat diplomacy use the UNHRC to commence bogus tribunals with intent to only carry out R2P for Global North political agendas. This is very clear from the demands being made.

We saw how Libya was liberated. Today Libya is a hell hole. We know the devastation in Iraq and Afghanistan.

We are now seeing Syria being bombed for no reason. Syria is to become the newest means for the war industry to gain profits at the cost of human lives and devastation of countries. Should Global South allow this rampage to continue?

We have also seen no outcome of the tribunals or truth commissions the UN steers. There is no Truth and there is no Justice. It’s only a super means of foreign travel for UN officials and an excellent form of channeling funding legally for agendas that are not accounted for.

Exactly what kind of Justice for the Victims has ensued from the UN Tribunals held thus far: We have had tribunals on Rwanda, Yugoslavia, Cambodia, Sierra Leone, Lebanon, East Timor!

When UNHRC former head Navi Pillay hid her supposed witnesses for 20 years and based on their supposed evidence the bogus allegations against Sri Lanka are made, we do not want the fate that happened to Serbian leader Milosevic to happen to our war heroes.

The Serbian leader was put in prison in 2002 claiming him to be a war criminal. Milosevic was branded the ‘butcher of the Balkans’. They compared him to Hitler and accused him of genocide. They demonised him just like the same entities are doing with Sri Lanka and its troops. He was given only 4 hours to present his case.  He died mysteriously in his prison cell on 11 March 2006. In 2016, the ICTY says Milosevic did not commit war crimes.The judgement came 14 years too late as Serbia’s leader was dead.

It was all a sham for larger agendas but a leader had to pay with his life. The global south must realize this and protect their nation by taking a stand on Sri Lanka for their own interest.

Serbia & Sri Lanka have many similarities – genocide was theme in both cases with inflated figures of dead but no dead bodies or names. Marti Ahtisaari who played a role in Kosovo independence was ironically chosen to investigate Sri Lanka by UNHRC in 2014. (OISL)

TNA is Sri Lanka’s version of the Kosovo Liberation Army (KLA) KLA was supported by CIA. LTTE and KLA are known drug traffickers.

Thus, the intrusive nature of HRC and OHCHR Head’s report paving the way for another unfair Core Group Resolution has been opposed by China in the statement by Ambassador Cheng Xu.

The sentiments expressed by the Chinese ambassador is what all Global South ambassadors must resonate, primarily because in allowing HRC and OHCHR head to pass unfounded allegations based on hearsay and intrude into the national laws of Sri Lanka means, the next target can be the 35 nations of the Global South including India.

We must also appreciate Russia for being a Global North nation but consistently backing Sri Lanka in the halls of the UN/UNHRC.