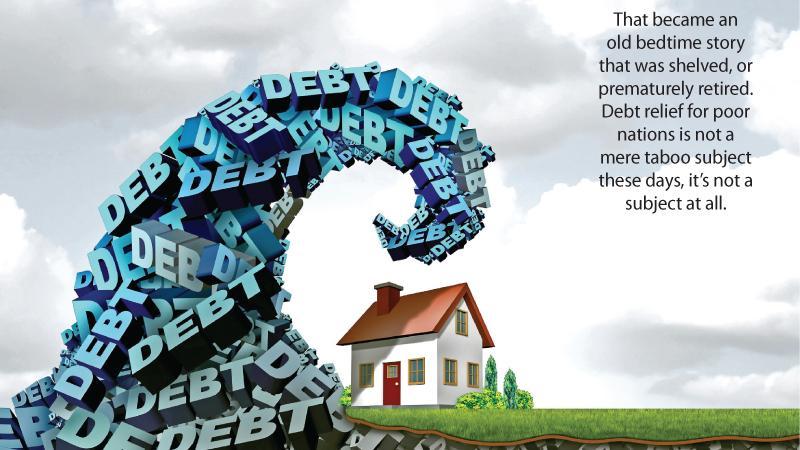 Debt is talked about, debt traps are talked about, but debt relief is a taboo subject. This holds for our external debt as it holds for the debt owed by the corner shop operator Haramanis who was up to his ears in debt as a result of the slowdown from the pandemic.

If ordinary people were given debt relief due to the Covid shutdowns it stands to reason that countries that faced the same lockdown disadvantage should receive the same amount of consideration that ordinary people get.

Look at it this way. The major players in the world economy have often lauded countries for locking down. But these same players never lifted a finger to help these countries that bit the bullet in this way.

Is this right? I mean, is it nice? It’s about as right as banks ignoring the debt relief policies prescribed by the Government for small business and for ordinary people.

Why is debt relief across borders and debt write offs not a topic in the international forums that discuss subjects such as the economic repercussions of lockdowns, and the effect of Covid on climate change?

Why is debt relief for poorer countries that were badly hit by Covid a taboo subject?

Perhaps the stand taken by ratings agencies should offer some kind of idea. Moodys and so on downgrade countries on the mere threat of default and not default per se.

So, if countries lock down — even if it’s granted that all lockdowns are necessary which they are not — and pay a price as a result, why is that praiseworthy, when the ballooning debt exacerbated by the same lockdowns somehow is looked at as unconscionable?

Governments too are keen on keeping their credit ratings tenable and are proud of the fact that the ratings agencies such as Moodys are often proven wrong.

Debt relief and writing off debt has meanwhile been made into a politically incorrect issue like criticising Imran Khan’s blasphemy laws. Most don’t see any connection by the way, between Governments being praised for locking down, and then reprimanded for being about to default on debt.

The global opinion makers are of the view that Sri Lanka’s debt crisis has nothing to do with the pandemic anyway. It’s interesting. Al Jazeera headlined an article as “it’s not just the pandemic: why Sri Lanka’s economy is in crisis.”

The opinion piece takes the view that the country accumulated a mountain of debt especially to China. If so, why didn’t the subject of repaying debt become one that focused the attention of the international media before the pandemic hit?

We get it. The general consensus – of international opinion makers that is — is that there was a stupendous amount of debt that was incurred, and that it was all very injudicious and it was bad policy.

Well, even if it was bad policy as those pundits say, the debt was by and large not a problem before the pandemic hit, was it? It wasn’t, for the simple reason that the country managed to pay off these socalled astronomical debts.

But then the pandemic hit and the revenues dwindled as they did everywhere, and suddenly there was a debt challenge. Reminds me of my uncle, let’s call him Perera less he murders me for revealing his identity with regard to the rather revealing story I’m about to tell…

Uncle Perera was an upstanding gentleman who was very scrupulous and never wanted to default on his debt. If you ask me why he took out various loans, well some said he was too ambitious, but others were of the opinion that he never let a good business opportunity go waste.

He leased a car and gave it on rent to a guy who did the Uber run, and gave him a cut in return. He had a myriad of sources of income similar to this, and of course if you lease a car, that incurs debt, but he was keeping it all totally and admirably under control.

Nobody was heard to complain that he knew nothing about good financial management or that he was not being very prudent about the way he borrowed. Apart from a rare remark about his enterprising ways which were deemed by some to be a little daring, he was considered a normal upstanding gentleman who was upwardly mobile, paid his taxes, and paid off his debt.

Then Covid hit and his Uber driver had a rather tough time and returned the vehicle to him, and some of his other business enterprises went South in the same fashion. Nobody could be blamed except the virus.

Nobody blamed Uncle Perera for his profligacy or his proneness to incur a mountain of debt.

In fact the Government as Governments all over the world did, advised the banks to offer him and people of his ilk, generous debt relief packages and other temporary relief.

Now, what if Perera was a country and not simply Perera, that avuncular figure who was earnest, enterprising and a gentleman to his fingertips? What if Perera was not just Perera but was Perera Island, a land somewhere in the Indian Ocean region with a population of around 21 million people or thereabout?

Why so? Apparently a country is not considered vulnerable to Covid and Covid related lockdowns the same way that people are. Countries are excoriated and ridiculed for ‘being dangerously in debt,” and told that their real problem is debt and not Covid and the resulting economic fallout.

A tad strange isn’t it? No world body encourages any bank or any international lending agency or any country to write off or rationalise the debt of Covid hit countries the same way the Government suggests Uncle Perera be given debt relief.

If you smell a rat, they will say that you are being rather theatrical in equating a country to an ordinary citizen.

But countries could be ambitious too and the way citizens lease out cars for hiring, countries may take out loans but let’s not even go there, because suggesting any debt relief for countries is a capital offence these days.

‘Debt relief for 39 counties on track to reach US$ 114 million’ said a press release from a global lending agency but alas, that piece is from 2013.

Debt relief became a taboo subject to be avoided and international debtor nations were downgraded to pariah status. All that coincided with a pandemic that devastated economies but if you believe in coincidences, you are good — but if you believe there is something rather queer in this coincidence, you are a nutcase that believes in the man on the moon, and the Loch Ness Monster.

What happened by the way to the international movement for debt relief for debtor countries which as far as this writer remembers was gaining a great deal of traction say in Latin American countries once upon a time?

That became an old bedtime story that was shelved, or prematurely retired. Debt relief for poor nations is not a mere taboo subject these days, it’s not a subject at all. The topic doesn’t exist. Not among Latin American progressives, not among the global fraternity of opinion makers, not among anyone who wants to talk, write or at least scream every now and then.

Do certain topics implode and in some way become subject to spontaneous combustion? Not that I have heard of.

On the other hand topics receive a downgrade too. It’s a less obvious downgrade than a ratings downgrade. It’s as if certain topics are told to get inside a closet and behave.

If international debt relief programs for least developed countries and so on, is not a topic now, during Covid, it would never be a topic. It’s done. Not even those dead dodo birds are as dead as that story.