“Get real”, the private sector should be told about tourism 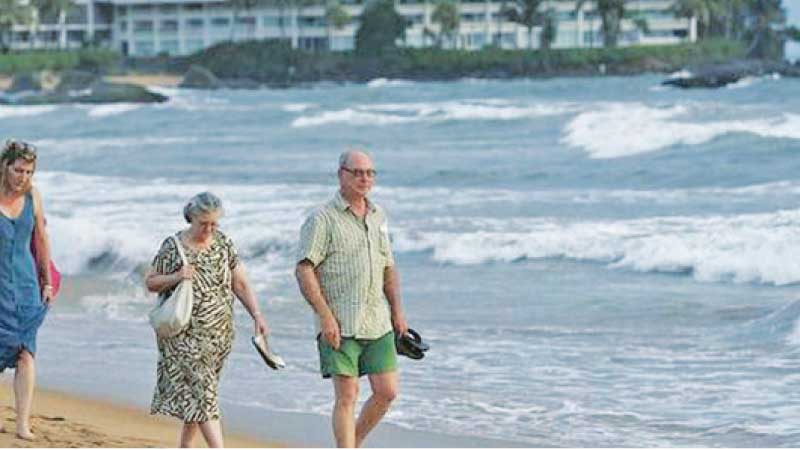 We can call ourselves the country that does not need a slogan or a branding. We can count ourselves as the fortunate island that nature endowed so as to need no embellishment whatsoever — the good wine that needs no bush.

But yet our tourism trade has had patchy success at least compared to the roaring success of the Maldives for instance, which just has one attraction, awesome beaches with shallow water for miles with a colour and sheen that defies description.

We have had branding conundrums instead of unbridled success of that sort. We are the Miracle of Asia, then we are the Land Like No Other.

In ancient times we were Serendib, the island of serendipity. Yes, we were the happy accident, the great chance, and we gave that word to the English dictionary. But in modern times we have not been able to replicate that quality of unplanned excellence. On the contrary, our tourism has been overdone — over mapped-out, plagued by overthinking and turbo-charged with promotion that has gone overboard. It has been all over the place — and of course the inevitable contrast has been the Maldives which has just one asset but has been able to mine that mother-lode to a point where it seems they have a found a perpetual source of wealth.

Ours has been a mixed bag at best. We were busy trying to convert serendipity into a formula. But also, we have been busy solving problems — of terrorism, and the fallout from the sudden event such as the Easter attacks.

But despite our fractured politics, and at one time our endless violence, there was always the sense that these were not the real impediments that plagued our tourism sector. We have remained a niche of sorts. We were in a way shortchanged by a global travel culture that celebrates hedonistic excess.

We have been unable to do hedonistic excess, even in patches. The Maldives in some ways is a study in hedonistic excess. It is packaged as blue waters and romantic islands but in reality it is resorts that encourage a splurge, with idyllic water sports and a culture of pampering and flattery of guests weaved into the bargain.

When MP Diana Gamage says something about keeping bars open till the wee hours, she has a vague idea about this hedonistic excess but bungles the language. She is far too direct about it in any case. Besides, it is not just a matter of keeping bars open — if that is what she said in the first place.

If we cannot offer hedonistic excess all around the country we should be able to offer it in pockets in controlled territories, but we have not been able to do that because our plans have usually been overkill and have targeted tourists on the theory that the more we market the more they are bound to arrive in their thousands.

Again, the Maldives is the best example of how they protect their culture with their tourism. Their hedonism is offered in strictly controlled environments and interaction between the locals and resort holidaymakers and other lounge lizards is almost non-existent.

This country has not seen the need to hermetically seal the tourists in their own zones partly because we do not have dire cultural strictures here as they do in the Maldives that bans the consumption of liquor in their communities, and imposes Sharia law.

But if we cannot offer the kind of hedonistic excess that Diana Gamage seems to suggest however clumsily, we should be able create the kind of tourism enclaves that they have done in the Maldives.

But our specialty has been general sightseeing, and since there is so much of that to do in this country that sort of tourism happens anyway — but travellers, truth be told, by and large want nothing but hedonism.

Such hedonistic experiences cannot be created by marketing. It has to be done unfortunately by offering a dissipated experience of bar-hopping, gambling and other unmentionables. From Bali to Bangkok to Macau to the Maldives, they have done that, and if we do not follow suit in some way we could essentially forget about attracting tourists the way these countries have. For the other type of backpacking low-budget tourism and of course the beach relaxation type of experience we offer as staple in the coastal belt, we do not even have to create a market as such — because that segment is already there except of course during this pandemic when any type of travel is generally at a standstill worldwide.

Some countries do nothing about their tourism enterprise and of course they get nothing back. But we did not do a lot about our tourism, or wait, that is not true, we have over the years been doing a whole lot of damage to it — and yet we got something back. This is true paradise. We do not do hedonism but Sri Lanka lovers are merely high on life and they keep coming back.

Rich countries get tourists anyway. The United States gets the most. UK gets a whole lot. Spain, well, not that rich but it is a special place and there are always the special exceptions such as that. But Thailand is a tourism Mecca, and that is pure hedonism.

So if people genuinely want to improve the tourism industry they should not be too annoyed with Diana Gamage. She had the absolute correct idea in her head except that she put it in unconscionably crude terms. Of course, the Maldives is far more jealous about preserving their cultural purity than we are as a Buddhist country. But that does not mean they did not create the hedonism — they just strictly kept that part away from their normal civilian lives. Smart.

If enclaves are created, they have to be essentially the Maldives or the Macau type. “Tourists only”, and hedonistic lifestyles in those enclaves unless of course we want hedonism everywhere as in Thailand — and that we can never do. Of course if we are going to have the usual cultural police trying to pry into everything that happens in tourism enclaves, that wouldn’t do. At the moment, the Government is trying to bring the three main tourism related State bodies together to form one institution. Good thinking, in the interests of having a cohesive tourism development drive once Covid is over. There are protests with regard to the move from the private sector.

The private sector cannot do wonders. The proof of the pudding is in the eating, if the cliché may be forgiven. Private sector tourism promoters were unable to shore up the numbers to anywhere near Thailand, the Maldives or Malaysia levels after scores of years. They cannot demand a stake in State-centered decision-making if they have failed. They cannot be faulted for failing either. We do not have hedonistic enclaves, we are not a rich country either. They cannot do it all by themselves.

It is why State policy is necessary to show a good direction. Their argument that there was a well thought out tourism plan in 2005 is hilarious. No matter how well it was thought out, or supposedly thought out, it has not delivered. Are these people out of their minds? Tourism is lagging behind the Maldives levels by leagues and they are insisting on sticking to tired old unsuccessful legislation with regard to tourism. Whatever they are insisting on developing in the country, it surely cannot be the tourist trade.