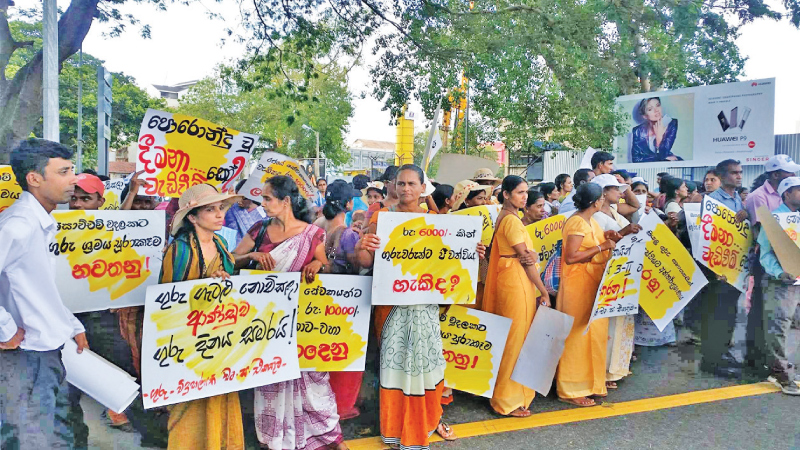 By now it is obvious that certain elements are behind all types of ‘issues’, ‘troubles’ and everything displayed in the media and in streets these days. These elements have their own agendas. Conspiring against selected Governments is their main job. Now they have started their usual job once again. But this time it is deadlier than ever before. This is because earlier in 1971, 1988/1989 etc. they used weapons such as T56 rifles, T86 rifles, hand grenades, etc. but this time they are using the best invisible weapon made available to them ever. It is COVID-19.

The Government is very successfully vaccinating the population of Sri Lanka and set a record by becoming the country in the world with the fastest vaccination speed. For the first time, vaccination is available during all 24 hours by now to obtain the second dose of the AstraZeneca vaccine. But just as any other country in the world Sri Lanka is also facing the threat of the Delta variant of COVID-19. No country can avoid it. But as a developing country we cannot tightly close the country for longer periods like developed countries do. We have to minimize closing down the country and make the closed durations shorter.

Now even a kindergarten student can see that every effort is being made by certain elements in order to bring people into streets, shout and move closely to each other touching each other’s body. In their words they call it ‘protests’ while the consultants call it laying the foundation for the next (fourth) wave of COVID-19 which can be the Delta variant. Almost all saw how the protestors behaved. No matter whether it is against the Government by teachers or demanding justice for the dead domestic aide, all the protestors did a fantastic job to increase the COVID-19 infections in Sri Lanka which was brought down with blood, sweat and tears of health staff and Armed Forces.

No matter who the protestors are, their leaders are very cunning and have hidden agendas. They play the game of billiards with COVID-19. They hit the ball aiming in one direction exactly knowing that the ball will end up in another end which cannot be guessed by anyone. If we tell this in simple words, the teachers are on the road demanding certain things in connection with their salaries and estate workers are on the street demanding justice for the dead domestic aide. The organisers will get various other benefits that protesters cannot even dream about. The protestors only get the Delta variant of COVID-19.

If Sri Lankans remember things for more than two weeks, watch television news and listen to the radio, all can remember that the teachers had a different demand in the beginning. That was not bringing in the Kotelawala Defence University Act. In the beginning they mentioned about a salary demand as something minor and just another small demand connected to their protest. But their main demand was on the Act. But when the time passed things changed and by now they demand salary and rarely talk about the Act. If anyone can carefully analyze this, all can see that they almost dropped their first demand and stuck to their minor demand by that time which was salaries. Why? Why did this happen?

This well planned torturing system commenced in 1974 with torturing a mathematics teacher at Kelaniya (then) Vidyalankara University. In 1975 it was Ms. Roopa Rathnaseeli who jumped from the top floor of a university building to escape from ragging and then committed suicide in 2002 after suffering 27 long years as a permanently disabled person. The list of killed undergraduates is very long. Then comes Chaminda Punchihewa (1993), Prasanna Niroshan (1993), S. Varapragash (1997), Kelum Thushara (1997), Samantha Vithanage (2002) by dropping a computer on his head, stabbing him with sharpnel and blocking and delaying (for hours) the vehicle from taking him to the hospital, Shanika Dilhan Wijesinghe (2019). Pasindu Hirushan (2020), the latest victim. There are many others.

Enough is enough. Now we desperately need the help of our heroic Armed Forces. They have already saved us thousands of times. The two deadly disasters, the LTTE Terrorism lasted for 30 years and COVID-19 are significant. The entire country, especially innocent poor parents of children below the age of 21 and the innocent poor children who cannot enter into foreign universities spending millions of rupees are eagerly waiting for our heroic Armed Forces to rescue them from these bloody brothers in state universities. No need for T56s and AK 47s. Security cameras and high technology will do the needful. They are waiting to be saved. No more undergraduates need to commit suicide, murdered or abandon university education. Enough is enough.

Most of the office workers have already changed their shifts in order to avoid congestion in public transport services which increase COVID-19 infections. The office workers who do not have their own transport and who do not get official transport face all types of difficulties and the direct threat of COVID-19. Others travel to their offices comfortably and safely.

Now state and private transport services do not provide adequate transport facilities during off peak hours. Due to this situation all office workers try to use whatever available public transport during peak hours despite COVID-19 threat.

For example office workers who need to report to their offices at 10.30 are forced to use public transport available before 8.30 or so. The office workers who can leave their offices early have to wait until 4.30 to get public transport. They do not have any other way to travel from and to home. They are being forced to put their health at risk while wasting their valuable time.