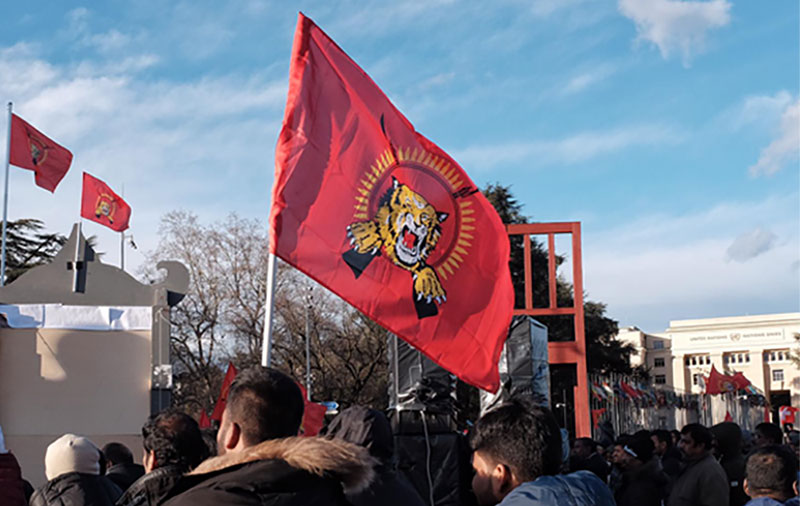 Austria boasted itself to be one of the world’s best 10 destinations and safest places to live & then terror struck and 4 are now dead. In France, even a cartoon cannot be drawn and teachers will find their necks chopped off. In the meanwhile, across the channel, the Queen’s government is busy pussy-footing Sri Lanka’s tiger terrorists that have proudly christened UK as their international headquarters since 1970s. UK, is today out of EU and obviously finds itself isolated among its European counterparts – it’s a matter of time UK may find itself further isolated if Commonwealth Countries too, begin saying cheerio – so much for the sun never setting on the UK! But, go ahead, lift the ban on LTTE, allow them to roam the streets of London, Harrow, Tooting with their flags and paraphernalia joining the other terrorists that UK has given safe haven to. We really do feel sorry for the Brits! They may need more than a stiff upper lip to tolerate the tigers!

LTTE was defeated militarily in May 2009. As far as we are concerned the only living tiger mouthpieces are a handful of Tamil politicians who come out during elections with their pro-tiger slogans or to gain cheap publicity garlanding a dead LTTE combatant. These are scenarios, we in Sri Lanka can definitely live with as we are pretty confident that our war heroes ensure, the nation is LTTE-free. Without a leader to match the charisma of Prabakaran, those tigers overseas with mikes can hardly measure up to become an alternate LTTE leader.

Though yahapalana thought fit to remove some of the LTTE fronts from the list of 16 UNSC Resolution 1373 declared terrorist fronts, many of them freely operate in the very countries that have banned them. If these western governments wish to keep the tigers near their bosom so be it. What really is the difference in UK removing LTTE ban when UK allows LTTE fronts to operate freely even with a ban? We really do not know. Must be UK foreign policy.

There are numerous social media posts appearing claiming LTTE are celebrating UK de-proscription. Good for them. Now we can tell the UN & UNHRC where to locate the ‘missing’ or ‘dead’ – they are living in jolly London.

It is hypocrisy of the highest order for the UK government to be pointing fingers at Sri Lanka, raising hands against Sri Lanka at the UNHRC while providing safe haven for these ‘missing’ ‘dead’ LTTE. We are thankful that these dead souls have found a home!

While Sri Lanka has had no LTTE related violence since 2009, can we ask the same of UK? Across the globe, these LTTE fronts are posing a bloody nuisance to the citizens in Canada, US, France, Germany and even UK though their politicians find them lovely company.

All our warnings about LTTE’s credit card scams, human smuggling, money laundering, armed violent gangs, blackmail & intimidations have gone on deaf British official ears. As a result, over 5 Tamil children have been killed, there are sword wielding gangs operating in the capitals of Canada, UK and France chopping off hands and fingers, they run legal firms training Tamils how to get asylum and refugee status and they provide the ins and outs of how to fool the stupid Brits to enjoy all welfare and charity systems. How lovely!

So, Britain can feel free to legalize all these acts of crimes and give a carte blanche to the LTTE to operate as they like on the streets of London, Harrow, Tooting and wherever they feel they have a right to shout and cause mayhem – so long as it is not in Sri Lanka, we don’t care. The MPs that molly cuddle them may not be too happy about the new found freedom though, as this would certainly bring to naught all the flirting the LTTE remnants engage in to win their favours. With ban lifted – LTTE will not require services of these MPs any longer!

In the meanwhile, UK may continue blabbering to us about ‘accountability’ and what not – not, that we give a damn, but something has to be put on paper, right! Just for the records!

We are keeping records ourselves. Next time UK preaches to us about assimilation and integration – we have a jolly good list of LTTE antics to present.

As records clearly show, while there are thousands of Sinhalese living in the UK – none of them have been remotely up to any of the nefarious acts that LTTE Diaspora have been caught red-handed in. Not only in UK, but in France, across Europe, US and even Canada. It speaks volumes of their inherent characteristics. Who are we fooling when UK bans one bogus charity to allow it to quickly set up another & transfer funds to it before UK closes it down. Does White Pigeon ring a bell? What about all the Hindu kovils collecting money for LTTE. Oh yeah, UK police are still investigating. Just like they are investigating that white tiger woman who not only trained children as young as 7 to kill but even taught them how to commit suicide. This woman is a nurse too. She may be the defacto LTTE leader in UK, for all we know!

The bottom line is – UK lifting the ban over LTTE does not make any difference to Sri Lanka or to Tamils, in particular. All of LTTE fronts illegal activities generating well over $300m annual profits post 2009 sans having to spend on military equipment, weapons or looking after LTTE combatants, have given nothing to the Tamil people in Sri Lanka. Even the LTTE combatants and their families have not received a dime from them. They spend for tamashas crying over dead LTTE, garlanding them, waving LTTE flags and pretending to feel sad but do not send a dollar or a pound to the families of the dead. Oh wait, closer to some LTTE anniversary, they are shrewd enough to present a handful of pounds or dollars and rally some Tamils and then pay some photographers to fire a few shots & that gets sent out across the world as if some ‘hundreds and thousands’ attended. What fertile minds these tigers have!

One of the reasons for the British to demand Brexit was that a majority of the Brits had got fed up with immigrants and their refusal to assimilate and accept the majority values and cultures as being the ethos of Britain. Each time the British have had to put their Britishness aside and have the foreign culture rule. The compromise has always had to be from the British with no compromise from the immigrants. Naturally, with time this was bound to face conflict and it is a feeling that the majority in all parts of the world feel and even Sri Lanka’s majority share the same sentiments.

What Britain and the British must take as a lesson from what Britain is today facing is that karma is a bloody bitch finally visiting Britain. We feel sorry that the ordinary British who have no role in creating the situation, have to face the onslaughts, but too bad, the British Empire purposely and with intent mixed native people, plucked them from their homes, carried them across the shores, dumped them in unknown and unheard of territories, forced them to work on them and then forced them to become citizens of their newly found homes.

We like to remind the Brits of the cliché ‘the chickens have come home to roost’ which perfectly depicts the bad karma calling on the British.

So, there is little point in being gentlemen or ladylike enough to nicely asking the British to continue to ban on LTTE, Sri Lanka is advised to guard its turf and allow the tigers to roam the streets of London with LTTE flags, registering LTTE nameplates to their cars and hopefully we can soon see the Union Jack replaced with the Eelam Flag. We are absolutely certain that an Eelam will be declared in either Canada, UK or France sooner than later.