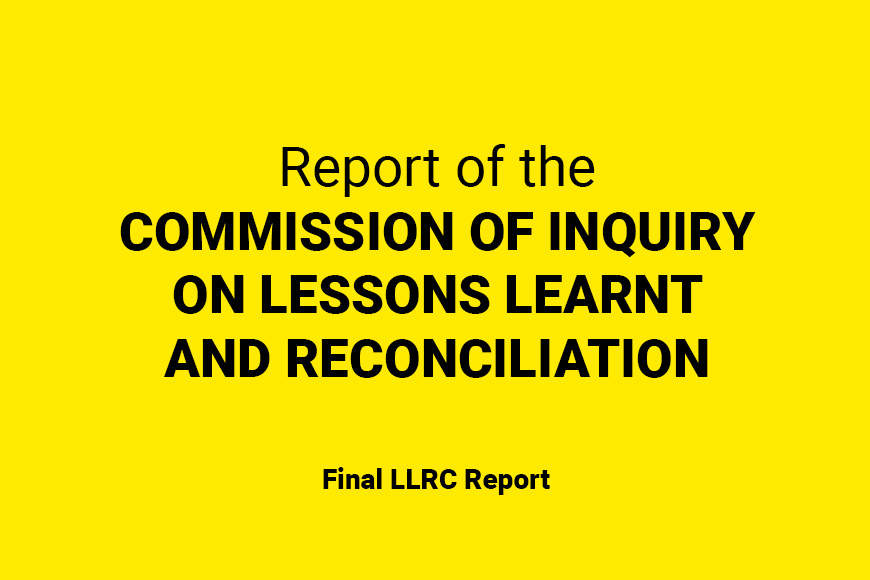 Report of the
COMMISSION OF INQUIRY ON LESSONS LEARNT
AND RECONCILIATION

The primary source of information for the Commission’s work was the general public of Sri Lanka, particularly those from the conflict affected areas and a number of national organizations and civil society groups who expressed their concerns and views in response to the Commission’s public notices inviting such views. In addition, the Commission also took into account, where appropriate and relevant to its mandate, a range of issues raised in published material in the form of reports by national and international organizations, including the report of the UN Secretary – General’s Panel of Experts on Accountability in Sri Lanka.

Although the Commission was constituted by Presidential Warrant dated 15th May, 2010, setting in place the requisite modalities including institutional and administrative arrangements relating to the functions of the Commission took up a considerable period of time. After the completion of such arrangements the Commission commenced hearings on 11th August 2010. The hearings were held in public and open to the print and electronic media unless the person making representations before the Commission requested otherwise. The procedure adopted at the public hearings was to first inform the representer that he or she could be heard in public or in camera. Some representers elected to make submissions in camera. Thereafter the Commissioners proceeded to interact through questions with the representer to clarify any matters that arose consequent to the representations made or which they felt were relevant to the terms of the Warrant.

The Commission decided to consult and hear the views of persons who would have personal experience and knowledge on different aspects of matters referred to in the Warrant. Invitations were also extended to local NGOs as well as NGOs based outside Sri Lanka, that have produced reports on the situation in this country pertaining to matters relevant to the Warrant. However, it is a matter of regret that despite the invitation extended in good faith, seeking a constructive dialogue on what the Commission considered as issues of common concern falling under the purview of its Mandate, this invitation has not been reciprocated by three organizations . As the public sittings progressed and consequent to the wide media coverage, there was a keen response from members of the public to express their views before the Commission.

Among those who made representations before the Commission were members of the public, public servants including those who had served in the affected areas during the conflict period, affected individuals, representatives of the armed forces, senior officials who were associated with the peace process, political leaders, religious leaders, members of civil society, journalists, academics and other professionals, former LTTE cadres and former members of other armed groups.

In addition to the public sittings in Colombo, the Commission undertook field visits to areas affected by the conflict. A list of places visited by the Commission is at Annex 1.4. The Commission was of the view that in order to ascertain first-hand the ground realities, it was imperative to have public sittings in situ. This was also with a view to reaching out to the people in the affected areas and to enable them to highlight their grievances. These people would otherwise have faced considerable difficulties in travelling to Colombo to make their representations. Through this process the Commission was able to acknowledge the suffering of the people in the affected areas and provide an opportunity for them to tell their stories in familiar surroundings. This approach focused on the restorative dimensions of the Commission’s Mandate.

On the 13th of September 2010 the Commission made its Interim Recommendations to His Excellency the President, covering a range of issues relating to Detention, Law and Order, Land, Administration and Language, which in the view of the Commission deserved urgent attention. The Commission also expressed the view that immediate action on these matters would provide relief and engender a sense of confidence among the people affected by the conflict and also provide an impetus to the reconciliation process. The Commission’s Interim Recommendations are attached at Annex 1.5.

The hearings held throughout the country and the public attention it generated particularly through the provincial media, resulted in a substantial increase in public awareness and interest in the work of the Commission. As such, the Commission had to extend the deadline for making representations in order to accommodate a continuous flow of requests from the public. In the light of these developments and the consequent increase in representations made to the Commission, it became clear that it was not feasible to conclude its work within the time period specified in the original Warrant. Accordingly, by Warrant dated 3rd November 2010 issued by His Excellency the President, the time limit for rendering the final Report of the Commission was extended until 15th May 2011.

As the process of analyzing the large volume of material gathered progressed, it was evident to the Commission that there were several specific areas and issues which required further elucidation/clarification, before the Commission could make an assessment of the matters, for inclusion in the report. Accordingly the Commission invited several public officials, military officials, experts and members of the public to appear before the Commission, some on several occasions. Follow up visits to some of the provinces were also arranged. All of this made it necessary for the Commission to seek a further extension of time. By Warrant dated 10th May 2011 issued by His Excellency the President the time limit was extended until 15th November 2011.

The Commission was conscious of the fact that the remit of the Commission required it to report on matters that may have taken place during the period between 21st February 2002 and 19th May 2009. At the same time it also recognized that the causes underlying the grievances of different communities had its genesis in the period prior to the time frame referred to in the Warrant. The Commission accordingly provided a degree of flexibility to the representers in this regard.

The material placed before the Commission covered a broad range of complex issues of a multidisciplinary nature, resulting in a need for the Commission to identify the issues which the Commission deemed necessary to deal with, in terms of the Mandate and its stated objectives. Accordingly the Commission identified the issues that it believed to be relevant and proceeded in working on these areas in relatively self contained Chapters with cross references to other Chapters, where required. The Commission was of the view that this approach would facilitate a better understanding of the issues, and assist in implementation of recommendations.