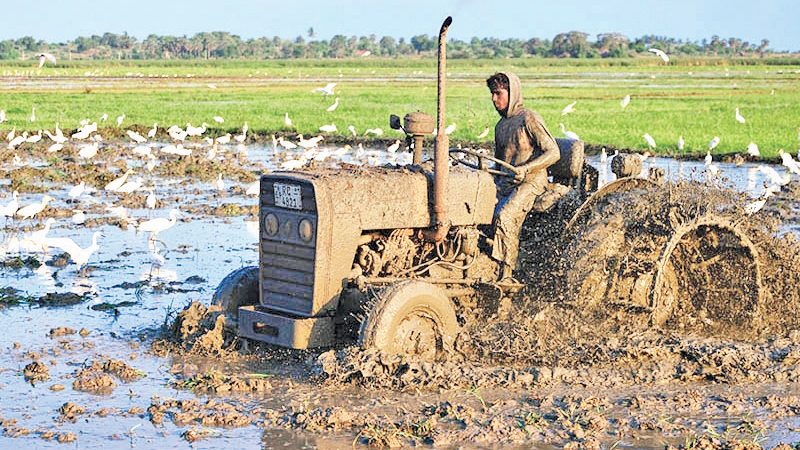 While farmers sweat and toil to cultivate food crops to feed the nation, the Government’s new policy decision to opt for organic farming with a firm ‘no’ to chemical fertilizer and other agrochemicals has stimulated a new debate in the country.

This type of a sea change in agriculture policy is certainly a difficult task to undertake and ground level support is a must to make it a success. President Gotabaya Rajapaksa’s decision to ban import of chemical fertilizers, pesticides and weedicides has received mixed, though mostly positive, reactions. All are in agreement that organic farming is environmental friendly and healthier to the people, but some have raised questions on its practicality and timing.

Farmers have long been used to apply chemical fertilizers to get a bumper harvest. They have started complaining about fertilizer shortages, and driven by the uncertainty, they were seen frantically queuing up to get their sack of fertilizer. This has now become a political hot topic given the sensitivity of the issue at hand.

The Government, while grappling with many issues caused or exacerbated by the COVID-19 pandemic, has focused attention on giving its fullest cooperation to farmers to overcome the problems they face in moving to organic agriculture. At the same time, the distribution of remaining fertilizer stocks among farmers has begun through regional administrative bodies.

In the meantime, leading environmentalists have come forward to point out some significant factors with regard to the recent Cabinet proposal to import organic fertilizer to meet the shortfall in the country. They have raised concerns that harmful organisms may enter Sri Lankan soil and water resources through the import of such material. They have explained that the Environmental Law does not allow importing such material because of the risks it entails.

Janatha Vimukthi Peramuna (JVP) Leader Anura Kumara Dissanayake, speaking along the same lines, complained that the President’s blanket ban on agrochemicals was an abrupt decision that has inconvenienced the farming community, who have already suffered considerable losses due to travel restrictions in place. He noted that the Government has got no solutions or alternative plans for the problems created by the ban.

The news of the resignation of the Agriculture Ministry Secretary came in the midst of the above developments. Secretary Rohana Pushpakumara resigned citing personal reasons, but there was suspicion whether the pressure surrounding the fertilizer issue contributed to that development. Hence it attracted a lot of political and media attention.

Agriculture Minister Mahindananda Aluthgamage told the media over the weekend that Wayamba University Vice Chancellor Prof. Udith K. Jayasinghe would soon replace Pushpakumara. The Minister, while stressing that the resignation had nothing to do with the fertilizer issue, however said the new Secretary would specifically focus on the Government’s organic farming drive. Prof. Jayasinghe is the third Secretary appointed to man the Agriculture Ministry in less than a year.

The President seems to be intent on walking the talk despite the initial snags the programme may encounter. Convening a meeting at the Presidential Secretariat last week, he advised the relevant officials to expedite the production of organic fertilizer for the next cultivation season. He also asked officials to procure or locally manufacture machines required to produce organic fertilizer.

Addressing a global forum last Friday, the President took pride in elucidating the country’s new organic farming drive. “If we are to preserve our planet and ensure human health and sustainability, Governments across the world must not hesitate to adopt bold policies. The decision taken by Sri Lanka to ban imports of artificial fertilizers and agrochemicals will pave the way for a greener economy and a healthier society, whilst supporting the aspirations of the State in terms of food security in the long term, the President said.

“We are aware that there will be teething problems during this transition. These include constraints in domestic production and supply of organic alternatives, as well as adverse public perceptions arising from the ban. However, as leaders, it is our responsibility to take decisive action despite the challenges we will face. If we hesitate to make decisions, essential initiatives such as this will always remain confined to the realm of discussion,” he told a Special Session of the Committee on World Food Security, an international and intergovernmental platform working on food security and nutrition.

The President’s Media Division said the Committee invited President Rajapaksa to deliver a special lecture while applauding the decision to get rid of chemical fertilizers. It also said that the organizers of the event commended Sri Lanka’s initiative as “a beacon to others”.

In another interesting development, United National Party (UNP) long-serving Leader and former Prime Minister Ranil Wickremesinghe, who has been licking his wounds since the ignominious defeat of his Party and himself at the last General Election held on August 5, 2020, is likely to make a political comeback this month contradicting his earlier statements of stepping down from the Party Leadership and not entering Parliament from the National List ‘backdoor’.

The UNP Working Committee last week unanimously agreed to nominate Wickremesinghe to Parliament to fill the solitary National List seat of the Party, which has been vacant for about 10 months now. The proposal to this effect by UNP Chairman Vajira Abeywardena, a known Wickremesinghe loyalist, had been seconded by UNP Hambantota District Leader Ananda Kularatne at the Working Committee meeting chaired by Wickremesinghe himself, and there were no reports of any objection.

The UNP polled 249,485 votes (2.15 percent) at the last Parliamentary Poll. None of its Members was able to win a seat by contesting, but the Party received a bonus seat for the overall percentage of votes it received. This was the hardest ever political blow the ‘Grand Old Party’ suffered in its entire history since it was founded in 1946.

The UNP has expediently and brazenly turned its back on the Party’s rank and file, who had chosen to vote for the Party despite the mass defection it suffered ahead of the Parliamentary Poll, by not appointing its Member to Parliament for nearly 10 months. The election watchdog groups cried foul that this was tantamount to disrespecting and undermining the people’s democratic right of franchise.

Back in the picture

The very idea of Wickremesinghe re-entering Parliament would have met with stronger backlash in the immediate aftermath of the Parliamentary Poll, as he was unpopular as a Prime Minister as well as a Party Leader. The disgruntled UNPers had then stepped up calls for his retirement pointing finger at him over the Party’s humiliating electoral defeat.

Biding his time till the dust settled, Wickremesinghe, known for his Machiavellian manoeuvres in politics, has engineered a political comeback after assessing his chances of survival in the current political climate.

The UNP Leader kept a low profile after he was roundly defeated, but has gradually come into the picture issuing media statements on contemporary issues. Many will agree that Wickremesinghe’s arch-rival in the existing political background would not be anybody in the Government, but the incumbent Opposition Leader.

Opposition Leader Premadasa has failed to maintain the initial political clout he commanded. Internal rifts have sprung up in the SJB, and not all in the Party are in agreement with the conduct and policies of their Party Leader. At times, Premadasa has come under criticism for not being quick enough to score from political full tosses, which have come his way. Against this backdrop, the political circles were agog with news of Wickremesinghe’s re-entry to Parliament. It was heard through the grapevine that he was also eyeing the post of Opposition Leader, but one may view it as a long shot.