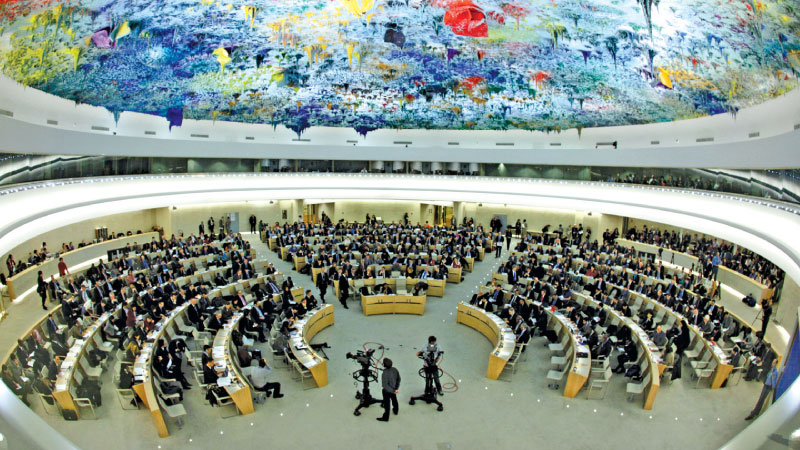 “International politics is never about democracy and human rights. It’s about the interests of states. Remember that, no matter what you are told in history lessons.”
– Egon Bahr,
German Politician (1922–2015)

Nearly 12 years after the war against terrorism ended, it is crunch time at the United Nations Human Rights Council (UNHRC) in Geneva, where Sri Lanka is being singled out once more for the alleged human rights violations in the last stages of the war in 2009 and consequential developments.

The Foreign Ministry, in consultation with the political leadership, was working round the clock during the last couple of weeks preparing the official response to the Report on Sri Lanka by United Nations Human Rights High Commissioner Michelle Bachelet.

The Government received an advance copy of the Report late last year with time till today to submit its response. According to Foreign Secretary Admiral Prof. Jayanath Colombage, a carefully worded and strong reply will be sent to the UN body right at the deadline articulating the country’s position on the references made in the Report.

Foreign Ministry sources corroborated the recent media reports that the Office of the United Nations High Commissioner for Human Rights (OHCHR) has pressed for stronger international intervention on accountability for alleged human rights violations and reconciliation in its latest Report on Sri Lanka.

This development was not entirely unexpected by diplomatic officials familiar with political nuances and undercurrents associated with the growing pressure of this international body on Sri Lanka, but the extent of the severity of that influence was what they could not exactly say till the content of the Report was made known recently.

It is learnt that the Core Group led by the UK and Canada are waiting in the wings to sponsor another Resolution at the Council recommending follow up actions based on the Report. Rather than the human rights record of Sri Lanka per se, the foreign policy analysts observe, geopolitics and lobbying of Tamil Diaspora groups have played a bigger part in these constant attempts to bring the international spotlight on Sri Lanka.

The 46th Session of the UNHRC is set to begin on February 22 and continue till March 19. This UN Inter-Governmental body made up of 47 Member States was formed in 2006 as an effort to monitor and address human rights abuses around the world.

However, its recent conduct has also earned brickbats by various parties as being “politically biased.” The Trump administration of the United States (US) pulled out of this Council in 2018 plainly stating that it was a “hypocritical and self-serving” organization that “makes a mockery of human rights.” Taking a different path to former US President Donald Trump, the new Biden-Harris administration is expected to build bridges with the Geneva-based Council and assume a prominent role in it. The analysts point out that the US influence on Sri Lanka would not be possible at the Session at hand, but it could be manifested at the Council in the future.

Well-aware of those new developments, Foreign Ministry sources pointed out that balancing the country’s foreign policy and using its strategic location in the Indian Ocean to make the US want to have better partnership with Sri Lanka would help prevent undue pressure.

Back to back Resolutions

Sri Lanka has featured in the UNHRC sessions time and again since the end of the war in 2009. From the controversial Darusman Report in 2011 (the Report of the UN Secretary-General’s three-member Panel headed by Marzuki Darusman of Indonesia) to the UNHRC Resolutions in 2012, 2013 and 2014, the country had to fight tooth and nail to defend its position, and also its independence and sovereignty.

A marked shift in the country’s position was observed when the former Government decided to co-sponsor the much-debated 30/1 Resolution in 2015 and subsequent Resolutions in 2017 and 2019 to buy more time to fulfil the commitments undertaken in 2015.

The 2015 Resolution also became a friction point in the former Sirisena–Wickremesinghe Government as the then President Maithripala Sirisena complained that he was not kept in the loop of the decision to co-sponsor it and accused former Foreign Minister Mangala Samaraweera about it.

The incumbent Government withdrew from the co-sponsorship of the 2015 Resolution and other consequential Resolutions adopted since then, and this was formally announced to the Council by Foreign Minister Dinesh Gunawardena in March last year.

However, as the extended time given to the country ends this March, the country’s progress on the said commitments is to be evaluated at the Council. It is now widely reported that the UN Human Rights Chief through her latest Report has called on the Member States to consider “the referral of the situation in Sri Lanka to the International Criminal Court” and other drastic measures such as asset freezes and travel bans against those alleged to have committed human rights violations after investigation and prosecution in their own national courts.

All these might have given one the impression that the UNHRC was breathing down the country’s neck. President Gotabaya Rajapaksa’s announcement last Friday on the appointment of a fresh three-member Commission of Inquiry headed by Supreme Court Justice A.H.M.D. Nawaz came against this backdrop.

The Commission is entrusted to go through the findings of the Lessons Learnt and Reconciliation Commission (LLRC), the Presidential Commission to Investigate Complaints Regarding Missing Persons (Paranagama Commission), the Darusman Report, and all other relevant reports and resolutions of the UNHRC to determine whether there had been any breach of International Humanitarian Law (IHL) or human rights violations and report with recommendations. This move falls in line with the Government’s undertaking at the 43rd UNHRC Session in March 2020.

When it comes to the ground situation on the front of human rights, many in the country agree that there has been tangible progress despite a few hiccups since the LTTE terrorism was defeated back in 2009. The citizens’ rights have seen improvements and in general a peaceful atmosphere has prevailed in the country (except for the Easter bombings in 2019), in contrast to many other countries in the world where stories of armed conflicts and blatant human right abuses were reported.

“When you look at the world, Sri Lanka is much more peaceful than any other country. We feel the regional body is applying double standards to Sri Lanka. It shows the hypocrisy of the West, but we want to continue our engagements with the UNHRC,” Prof. Colombage had commented in an interview with our sister paper, the Sunday Observer, last week.

“The Tamil diaspora sympathetic towards the LTTE has become a sizeable vote bank for politicians in those countries. Those politicians become the mouthpiece of that vote base. Besides, this particular vote base has a lot of money. With that money they can buy politicians, lobbies and opinion makers. We have to face it.

“The Core Group on Sri Lanka through their representatives here has indicated to us that they would like to have a consensual resolution that would give us another year to implement Human Rights commitments. We have conveyed that if we are to agree to that, the text of the new resolution should be drafted jointly,” the Foreign Secretary had explained in the same interview, adding that the Government is discussing with like-minded members, especially in the Southern Bloc, to obtain their unstinted support in Geneva.

Meanwhile, several Tamil parties in the North and the East had collectively sent a missive to the UNHRC Member States on January 15 calling for tougher action to end impunity, so that the victims “would not be denied truth and justice.” The letter had been undersigned by Tamil National Alliance (TNA) Leader MP R. Sampanthan, Tamil National People’s Front Leader MP G. G. Ponnambalam, Tamil Makkal Tesiya Kootani Leader MP C.V Wigneswaran and representatives of eight other groups.

The letter had complained of the non-release of the Tamil prisoners detained under the Prevention of Terrorism Act (PTA), alleged land grabs in the name of archaeological explorations, surveillance of political and civil society activists, militarization and the denial of burial rights during COVID-19 to the Muslim brethren, among other things.

All these developments add to the challenge before the Government to keep its head high among the international community and beat the odds at the critical UNHRC session coming soon. Genuine international friends matter to the country at this critical juncture to turn the tide in its favour. It is in this context that we should analyse the visit of the Pakistani Prime Minister Imran Khan to Sri Lanka next month. Countries such as Pakistan have remained by Sri Lanka’s side right throughout. Once a Sri Lankan leader was heard exclaiming that the Pakistani representative to the UN was doing a better job of defending Sri Lanka than its own representative. Such South–South friendships and alliances matter immensely as Western countries band together to pressure smaller developing nations over various issues including human rights.