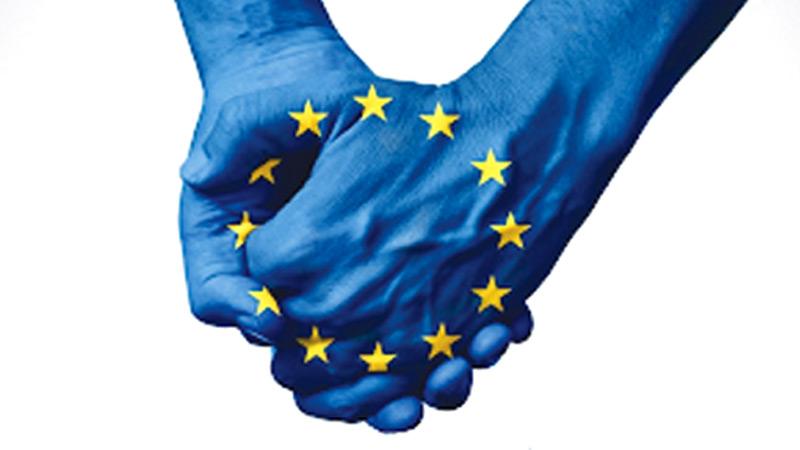 A delegation from the European Union (EU) is currently in Sri Lanka to review the country’s adhering to EU conditions for export trade concessions via the Generalised Scheme of Preferences plus (GSP+). Some sections in Opposition and other interested parties have given a wrong interpretation that the delegation is here to recommend withdrawal of the GSP+ concessions earlier proposed by the EU Parliament (EUP).

The visit is not a follow up of the adoption of a resolution by the EU Parliament in mid-June calling on the European Commission to consider temporary withdrawal of Sri Lanka’s GSP+ status. The EUP has no power to withdraw GSP concessions. The EU is mandated to conduct annual reviews on the conditions on recipient countries and the EU could not send a delegation in 2020 and the current visit is to review the progress during the last two years.

The EU delegation includes senior adviser on trade and sustainable development, Nikolaos Zaimis, European External Action Service (EEAS) Head of South Asia Division, Ionnis Giogkarakis-Argyropoulos, GSP Trade Preferences Coordinator, Guido Dolara, Head of European Commission Directorate-General for Employment, Social Affairs and Inclusion, Lluis Prats, and EEAS Desk Officer for Sri Lanka and the Maldives, Monika Bylaite. It will assess Sri Lanka’s compliance with 27 international conventions related to GSP+, including human rights, labour, environment and good governance. The EU delegation will also take note of the fact that the duty concessions has a positive impact on vast improvement of living standards of lower middle class employees in the garment industry, fishing sector and many such sectors that produce goods for the European market. They cannot be indifferent on the progress in women empowerment too.

The GSP was created by the United Nations (UNCTAD) in 1968, as a part of the international trade rules, mainly to end the EU’s discriminatory preferential arrangement which violated Most Favoured Nations (MFN), the most important principle of the multilateral trade law.

Since GSP too necessarily puts some countries in a better position than others and was an outright breach of the MFN, GATT Member States adopted a decision, known as the Enabling Clause giving an exception from Article I of GATT to allow developed countries to provide tariff concessions to developing countries. However, the Enabling Clause dictates that tariff concessions can be provided only in a generalised, non-reciprocal and non-discriminatory manner.

The EU GSP, launched in 1971, during its early years, provided concessions in a generalised, non-reciprocal and non-discriminatory manner, as required under the international trade law, and was available to all developing countries other than high-income developing countries.

The EU continued with other discriminatory preferential arrangements and continued to provide better tariff concessions to the ACP countries in total disregard to the MFN and non-discrimination. The objective was very clear, to divide the developing countries, in the WTO and in UNCTAD. But the developing countries, for the sake of unity, agreed to provide a temporary waiver, for the ACP preferences.

These concessions were not extended to those countries which combatted drug trafficking more successfully, like Thailand or India. Sri Lanka too could have cultivated and exported cannabis (perhaps coca and opium) if required. But we had successfully fought against it. So we were not rewarded. In other words, law-abiding countries were penalised and the violators were rewarded by the EU.

In 1999, two other special incentive arrangements were added, one linked to certain international labour standards (GSP labour) and the other linked to the protection of rainforests (GSP Environment). Then, in 1990 the EU started to make a mockery of the GSP scheme as well and began to discriminate between the developing countries. First, an outrageous arrangement called ‘GSP Drug’ was introduced.

After the 9/11 attack in the United States, in January 2002 Pakistan was added to the list of GSP ‘drugs arrangement’ beneficiaries! No reasons were given. Perhaps, it was a reward for supporting the Taliban. As a result of the WTO decision the EU was forced to discontinue GSP Drugs. In 2005, all the beneficiaries, other than Pakistan, of the GSP Drugs, Labour and Environment arrangements (and two new applicants for GSP labour), were selected for enhanced preferences under GSP “Human Rights and Good Governance Clause” (GSP+). All they had to do was send a simple application.

Sri Lanka explained to the EU delegation about the progress made in many areas such as labour, human rights, release of former militants from prison, reparation to over 3,000 victims and their families and assured that the process will continue until all the issues are settled. Although the EU Parliament passed resolutions calling for withdrawal of GSP+ concessions to Philippines and Pakistan because of the alleged human rights violations, the EU has not taken steps to withdraw concessions to those two countries. Hence, it is wrong to forecast that there is an imminent danger of Sri Lanka losing GSP+ concessions as a result of the current visit of the EU delegation.