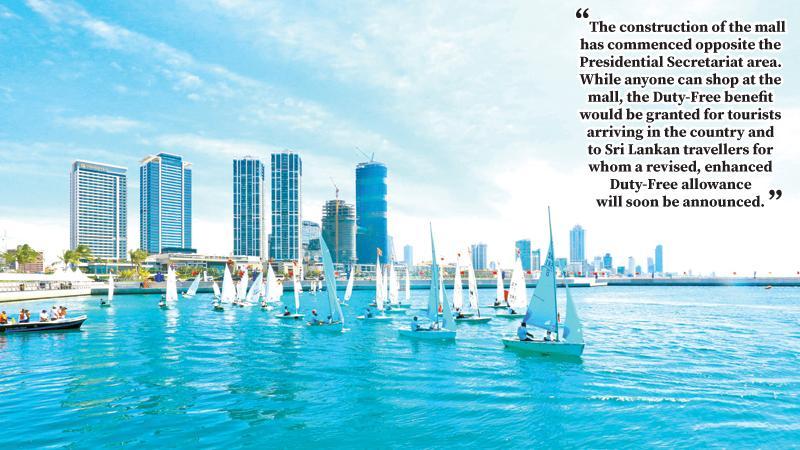 With Port City Colombo’s Marina Promenade being open to the public from Monday (10), thousands arrive at the location to witness the changing landscapes and get a glimpse into the future of a new city rising from the sea.

It’s a new experience for the people to take in Colombo from outside, standing at the neatly paved walkway, and walking across the state-of-the-art bridge in the serene atmosphere created at the location.

As people start witnessing for themselves what the future could look like if all goes well, the Colombo Port City Economic Commission, set up in June 2021 by President Gotabaya Rajapaksa, provided an update of the work carried out by them so far since its establishment.

Of the 31, six have already been leased to third parties on a 99-year basis, making it the first set of land plots to be leased for development purposes. This generated US$ 200 million in sales revenue with a collective investment commitment of US$ 600 million, the Commission stated.

By now, the Commission has earned the Rs.400 million advance received by CPCC for operations, due to the leasing of land plots and the sum will be reimbursed.

The Commission also oversees the construction of the region’s first Downtown Duty-Free (DF) mall, to be operated by two of the world’s leading DF operators, positioning the Colombo Port City as a regional shopping destination, the Commission stated.

The construction of the mall has commenced opposite the Presidential Secretariat area. While anyone can shop at the mall, the Duty-Free benefit would be granted for tourists arriving in the country and to Sri Lankan travellers for whom a revised, enhanced Duty-Free allowance will soon be announced.

The Commission also announced that the International Commercial Dispute Resolution Centre was handed over to international operators under a MOU with the Ministry of Justice. Provisions to operate such a centre dedicated to commercial disputes within Port City were granted under the Colombo Port City Economic Commission Act to create a feasible environment for investors to do business.

The Commission added that it “engaged world-class advisory firms to develop suitable policies and procedures for identified thrust sectors, and to design best-in-class regulations in both fiscal and non-fiscal areas.”

Although members were appointed to the Colombo Port City Economic Commission, the post of Director General qualified to handle operations to international standard was vacant. However, the Commission said that it had short-listed final interviews for international recruitment of Director-General candidates.

Since Port City Colombo is now in the phase of land leasing and vertical construction, the Commission for the last six months has continued to expedite Approval, Investor Agreement and Licensing processes for potential investors and authorised persons.

Port City is readying for the future of doing business with its presence in the digital platform. In order to ease business processes without being physically present, Port City will have a Special Port City e-business and Virtual City and the concept for this is already completed and submitted for peer review by the Sri Lankan Government, the Commission stated. With lessons learnt during the Covid pandemic when most businesses came to a staggering halt due to the lack of digital presence, this new city has recognised that the digital platform is absolutely indispensable to do business without interruption.

The Commission has also identified all 74 primary development plots as Businesses of Strategic Importance, entitled to the maximum benefits permissible under Section 52 of the CPCEC Act, according to the Commission statement. Section 52 of the Act stipulates that businesses “designated as ‘Businesses of Strategic Importance’ would ensure the success of the objectives in establishing the Colombo Port City, having regard to the national interest or in the advancement of the national economy.’ The Act also enables such designated businesses tax-related exemptions or incentives to do business, further enabling a business-friendly environment for investors.

As another step to ease business processes, the Commission has designed a streamlined Customs process for clearing of capital goods and consumables into Port City. In providing a single-window facilitation for investors, the Commission has initiated discussion in this regard with relevant government departments, and provided, as a pilot project, full service i.e. Port Health, Immigration, Customs, and International Ship and Port Facility Security Code, to Port City’s first super-yacht MY Kalizma at its arrival at the international marina on-site.

Another achievement for the Commission since its establishment is the partnering with a leading global technology company to deploy a state-of-the-art digital platform for all-inclusive investor engagements for smooth businesses processes.

Within the past six months in operation, the Commission also collaborated with Sri Lanka Association for Software Services Companies (SLASSCOM) to brand IT/KPO (Knowledge Process Outsourcing) as a thrust sector for the Port City by “developing policies conducive to attracting world-class technology companies to invest in the Port City and to partner with Sri Lankan companies for maximum knowledge creation, transfer and export centred around a “Colombo Tech City” concept promoting the nation’s drive of creating Sri Lanka into a green IT hub.

The Commission stated that it has also worked towards enhancing visibility of the project by facilitating numerous international promotional events such as Red Bull Outrigged 2021, FIFA Federation Chairman and Delegation visit, LPL Cricket launch, Asia Rugby President and delegation visit, as well as licensed several other ongoing temporary activities. Such events work towards bringing more international attention towards Port City, enabling investors to view it as a desirable destination.

In the same vein, the Commission conducted internal and external sustainability workshops to raise the standards in differentiating Port City as a climate-friendly city of the future.

The Commission has also engaged with the Sri Lankan defence forces, especially with the Air Force on flight control management for commercial and emergency (rotorcraft-vertical) flight movement to and from the Port City as well as the Navy with which it conducted a feasibility study on defining management protocols for sea access and concerning the internal waterways of Port City.

“The absence of restrictive exchange controls, a preferential tax system with zero tax on personal income, remuneration in foreign currency (FC), and flexible long-term visas for foreign workers and their families coupled with the Sri Lankan lifestyle has generated significantly in the project from international investors,” the commission stated.

It added: “The establishment of the Colombo International Financial Centre in February 2022 and associated exchanges will soon stimulate the flow of FC through the Port City, creating employment and adding substantial value to the broader economy over time. Our current focus is on identifying and creating compelling value propositions in physical infrastructure development, banking and financial services, knowledge export and other key sectors, targeting reputed anchor investors in each.

The commission strives for transparent and efficient processes in setting up businesses, condominium ownership, gaming and leisure activities and city management that will be globally competitive, and welcomes all input towards achieving its objectives.”