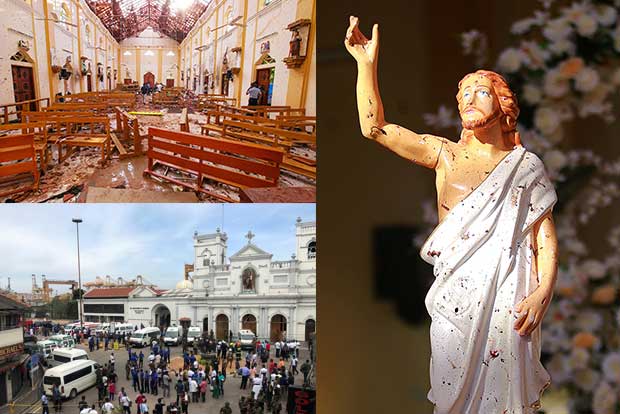 Someone robs a bank. Now, obviously, it is not always the case that those who carry out such heists do all the planning themselves. The brains prefer not to get their hands dirtied. Also, in case things go wrong, they would obviously want the out of ‘not being involved,’ which of course would be tough if they were caught with their hands in the kitty. It is the same with terrorists and terrorism. The leaders let others handle the doing and dying.

There’s a difference though. While all organisations, right and left, fundamentalist or otherwise, can be used, the very nature of terrorism, especially in operations involving suicide attacks, such manipulation by ‘outside forces’ is a tad difficult. However, it could be argued that to the extend that terrorism and terrorists have their financial backers there is some form of nudge involved. The USA, for example, does it all the time (think, ‘Afghanistan’ from at least since 1980). That said, it would be silly to claim that the financial backers set the agenda right down to the finest detail. Typically, such outfits are set up and/or funded and even armed and trained to tilt a political equation in a particular direction. It is the terrorist on the ground who picks targets, does the homework, designs strategy and executes.

There’s only so much juice, then, that one can extract from that particular useful political orange called ‘brains.’ Those who love conspiracy theories can backtrack several decades or even the beginning of recorded history or even beyond. Prabhakaran was a construct of Sinhala Buddhist Chauvinism, it has been argued. He is also the issue of Tamil Chauvinism that predates Sinhala Buddhist equivalents by several decades, it can be argued. No, it was the British, did someone say? No, Raja Raja 1, the Chola brigand, sacker of cities and plunderer of wealth, right?

So, can we argue that the attack on the Central Bank building or the Sri Maha Bodhi or the Dalada Maligawa or the assassination of Appapillai Amirthaligam was the handiwork of Anagarika Dharmapala or Arumugam Navalar? No. That’s how silly the conspiracy theories being floated about a ‘mahamolakaru’ (mastermind or ‘brains’) associated with the Easter Sunday attacks are.

That said, there can be accomplices, accessories after the fact of terrorism. Those who have aided and abetted or helped set things up. The negligent, it could be argued, belong to that group of individuals. Negligence on the part of those mandated to keep eyes open and take necessary action is a serious matter. The negligent in such cases are friends of the enemy, even though they may not have broken bread with the likes of Zahran Hashim.

Negligence is the word. It implies incompetence. Its colour is even more pronounced when the person in question is supposed to be an expert. So if the then president, Maithripala Sirisena (not an intelligence officer and not an investigator) and then Minister of Public Administration and Management and Law and Order Ranjith Maddumabandara (not an intelligence officer and not an investigator) were negligent (yes, they were both aware of the warnings), what could one say of the pin-up boy in charge of investigation during the Yahapalana years, Shani Abeysekera?

Shani ‘I am the Man’ Abeysekera (as per his FR affidavit) was the then government’s go-to guy. Remember that this was a period in which the military was sidelined by a political regime that believed anything or anyone associated with the Army was a threat to their version of peace, reconciliation and all such things. Intelligence was not just ignored, the relevant apparatuses were all but dismantled.

The intelligence agencies, crippled though they were, still did their job. They are mandated to report and report they did. They do not have investigative power nor such mandates. During those  years it was the CID that led. Others had to watch from the sidelines.

What happened? On the 19th of February, 2019 (just two months before the attack), the CID visited Zahran’s house in Kekunagolla, Kuliyapitiya. A statement was recorded. That’s it. Now if Shani’s CID was such a stellar outfit they would have known or at least found out that Sara Jasmine (wife of Hasthoon, the  Katuwapitiya Church suicide member) and Ferosa (wife of Azath,  Batticaloa Zion Church suicide member) were in that house at that very moment? They didn’t search. They just left.

In December 2021, a petition was submitted to the Secretary, Public Security, regarding the above. It was referred to the AG for advice and a case was filed in the Magistrate’s Court Kuliyapitiya. That’s the context for Shani’s FR application.

What is he claiming?  He’s essentially saying that he was misled by intelligence reports. He cites the investigation regarding the Vavunathivu attack and others, claiming in essence that intelligence agencies had offered red herrings. Well, if he’s such a star, he would have noticed the fact quickly and called on his political friends for punitive action against these miscreants. Anyway, chasing red herrings is no excuse to let the big fish get away, especially considering the resources at his disposal and the political backing he enjoyed. The CID, moreover, is not an adjunct of the DMI or SIS.

Shani led the investigations into 11 incidents related to extremist activity prior to Easter Sunday, but failed to identify suspects or take action that could have prevented the attacks. Even if, as he claims, he was led astray by the intelligence agencies, who may or may not have mentioned several possible groups involved in the Vavunathivu attack, in the first week of April 2019, the DMI specifically informed the CID that Zahran was responsible. That’s not mentioned in the FR. Why not, one wonders.

Anyway, there’s a simple fact that’s missing in Shani’s story. It’s called responsibility. Investigation is his business. If the CID’s work is done by intelligence agencies, then why should we have a CID? It’s police work. They need to investigate. They need to find evidence. They play a key role in law enforcement and public security. What we see here, then, is a cheap attempt to get others to share the blame. Well, you can’t have it both ways: you can’t in one instance say ‘I am the Man, all seeing, all powerful, competent beyond belief etc., etc.’ and then say ‘some idiots in the intelligence agencies played me for a sucker and I went along with them.’ You cannot be THE pin-up boy and when things go wrong say ‘I was just one among many on that stage; in fact I was in a corner and made to twiddle my thumbs.’

Back to brains. Shani was not responsible for the Easter Sunday attacks. He’s not the  mahapolakaru, if there was one anyway. He was obviously negligent. And now he’s essentially saying ‘I am incompetent, I didn’t know, I was led astray, don’t blame me.’