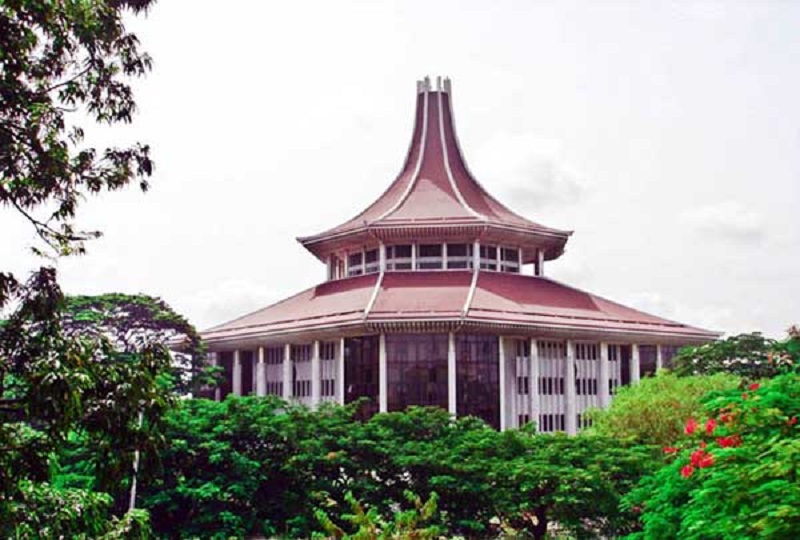 The 20th Amendment has given rise to a debate over whether dual citizens should be allowed to contest elections in this country. The dual citizenship law has been operational for decades and nobody had any issue with it until the yahapalana camp seized on it as a means of keeping the Rajapaksa brothers Gotabhaya and Basil out of politics. The yahapalana camp includes the majority of the foreign funded NGOs that have no purpose other than to interfere in, and influence the politics of Sri Lanka in order to push the agendas of their foreign paymasters. It would appear that individuals belonging to at least some of these foreign funded NGOs have made representations to the Supreme Court against allowing dual citizens to contest elections in this country. That raises a very cogent question.

If dual citizens are to be banned from contesting elections and indeed as some have suggested even holding other government positions because of their ties to foreign nations, then it follows that similar restrictions should be extended to all individuals and organizations that receive funding from foreign governments and organizations to carry out political work in Sri Lanka. If the oath that a person takes in obtaining citizenship in a foreign country is seen as a danger to Sri Lanka, how much more dangerous is the phenomenon of having persons who are paid to do the bidding of various foreign parties within Sri Lanka? For decades, Sri Lanka has had no protection at all from outside parties that seek to influence events here by hiring people to manipulate public opinion and engage in similar activities. As a result of these NGOs, Sri Lanka has few genuine voluntary organizations. The very phrase ‘civil society’ has been hijacked by foreign funded NGOs.

In contrast to Sri Lanka, India has always had adequate protection from the phenomenon of foreign funded political activism in the form of the Foreign Contributions Regulatory Act which was first promulgated in 1976 during the Indira Gandhi era and then revised and updated during the last Congress government in 2010. Indian political elites have always been more conscious of the need to protect their country from this kind of insidious foreign influence than their Sri Lankan counterparts. The re-drafting of India’s Foreign Contributions Regulatory Act took place during the last Congress government by a Parliamentary committee headed by opposition law-maker Sushma Swaraj. Now that a debate on the advisability of having anyone with a foreign linkage however tenuous from engaging in politics has been initiated, it should be extended to people paid by foreign parties to engage in political activities in Sri Lanka.

For well over a decade, this writer has been advocating the adoption of an Indian Foreign Contributions Regulatory Act-style law in Sri Lanka. The preamble to the Indian Foreign Contribution (Regulation) Act, 2010, (FCRA) describes it as a law to regulate the acceptance and utilization of foreign contributions or foreign hospitality by certain individuals or associations or companies and to prohibit such acceptance and utilization for any activities detrimental to the national interest. This is exactly what Sri Lanka is in dire need of. It’s not just foreign money that comes under the purview of the Indian FCRA but even foreign junkets, training programmes and scholarships offered by interested parties to selected individuals with a view to influencing them.

The Indian FCRA extends not only to all inhabitants of India, but also to citizens of India outside India and to branches or subsidiaries, outside India, of companies or bodies corporate, registered or incorporated in India. Money earned by Indian citizens from foreign sources by way of salary, wages or other remuneration in the ordinary course of business transacted in or outside India or by way of proceeds of international trade or commerce does not come under the FCRA. India has a large workforce employed outside her borders and a vibrant external trade and the provisions of the FCRA do not interfere in any way with such matters. Stipends received from legitimate foreign scholarships also do not come under the FCRA. However, everything else including even gifts received by members of Indian delegations on overseas visits do come under the FCRA.

Trying to circumvent the FCRA by transferring funds from one entity to another will also not work under the Indian law, because a donation or transfer of any funds by any person who has received it from a foreign source is also deemed to be a foreign contribution. Even interest accrued on a foreign contribution deposited in any bank is deemed to be a foreign contribution.  Foreign hospitality which means any facility provided in cash or kind by a foreign source to provide a person with the cost of travel to any foreign country with free board, lodging, transport or medical treatment, also comes under the FCRA. The source of foreign funding or foreign hospitality can be the government of any foreign country or an agency of such government, a foreign company, citizens of a foreign country, companies, corporations, trusts, societies or associations registered in a foreign country, foreign trade unions, or any international agency. However the United Nations and its specialized agencies, and certain other institutions approved by the Central government of India such as the World Bank and the International Monetary Fund are exempt from the application of the FCRA.

Persons who should not receive foreign funding

In India, the persons prohibited from receiving foreign contributions are candidates for election, correspondents, columnists, cartoonists, editors, owners, printers or publishers of a registered newspaper, and holders of equivalent positions in any electronic or internet based media engaged in the production or broadcast of audio news or audio visual news or current affairs. Judges, government servants or employees of any corporation or any other body controlled or owned by the government, the members of all legislatures (which means the members of every elected body from the Parliament right down to the Panchayats) any political party or office-bearers thereof and any organization of a political nature as may be specified by the Central Government are also prohibited from receiving foreign funding and hospitality.

When you look at this list of persons barred from receiving foreign funding in the Indian law and think of what has been happening in Sri Lanka for decades, you realize that it’s nothing short of a miracle that this country is still in existence. Even as these words were being written, The Island reported that several Sri Lankan NGOs including the People’s Action for Free & Fair Elections (PAFFREL), the Centre for Monitoring Election Violence (CMEV), the (hitherto unheard of) Center for Investigative Reporting Sri Lanka (CIR) and the Sri Lanka Press Institute (SLPI) had received funding from Canada. In India, that would not have been possible. In 2010 and in the run up to the 2015 presidential election, close relatives of the yahapalana presidential candidates of those years were caught red handed while in possession of large amounts of foreign currency and we still have done nothing about banning candidates at elections and political parties from receiving funds from foreign interested parties.

In contrast, under the Indian FCRA, No person, resident in India, and no citizen of India resident outside India, shall accept any foreign contribution, or acquire or agree to acquire any currency from a foreign source, on behalf of any political party. No person, resident in India, shall deliver any currency, whether Indian or foreign, which has been accepted from any foreign source, to any person if he knows or has reasonable cause to believe that such other person intends, or is likely, to deliver such currency to any political party or any person referred to in the list mentioned above.

Restrictions on the acceptance of foreign hospitality in the form of junkets by certain categories of people is also a main part of the Indian FCRA. No member of a legislature (which means any elected body from the Parliament down to the Panchayats) or office-bearer of a political party or Judge or Government servant or employee of any corporation or any other body owned or controlled by the Government shall, while visiting any country or territory outside India, accept, except with the prior permission of the Central Government, any foreign hospitality. Even if such a person falls ill during a visit overseas, and receives emergency medical treatment, that’s categorized as foreign hospitality and it has to be reported to the authorities within one month from the date of receipt of such hospitality giving the source from which, and the manner in which, such hospitality was received.

Under the Indian FCRA, every person who has been granted a certificate or given prior permission to receive foreign funds can receive such funds only through a single bank account.  There are a number of rules which have to adhered to in spending this money as well. Firstly, it can be used only for the purposes for which the contribution has been received. Not more than 50% of the money received can be spent on administrative expenses. In deciding whether any person or entity should be granted permission to receive foreign funds or foreign hospitality, the Indian central government will have to satisfy itself to the effect that allowing such foreign funding or foreign hospitality would not be prejudicial to the sovereignty and integrity of India; the public interest; the freedom or fairness of election to any legislature, or harmony between religious, racial, social, linguistic or regional groups, castes or communities.

The FRCA states very specifically that no person having a definite cultural, economic, educational, religious or social program shall accept foreign funding unless such person obtains a certificate of registration from the Central Government. Another point to note in the Indian FRCA is that the implementing authority is always the Indian central government with the states having no role in it. If the government has reasonable cause to believe that any provision of the FRCA is being, contravened, the Central Government may appoint an officer to audit any books kept by the persons or entities concerned. Such officer shall have the right to enter any premises for the purpose of carrying out his duties.

The Foreign Contributions Regulatory Act has obviously served India well over the past four decades and more which is why the 1976 Act was revised and renewed in 2010. The politics of Sri Lanka would have been very different if such a law had been in operation in Sri Lanka as well. The year 2015 was the year that the foreign funded NGO sector virtually took over Sri Lanka with many such individuals obtaining appointments as members of the numerous commissions that were set up. The lesson that our past experiences teach us is that if India needed an FRCA, we need it even more.