Does Sri Lanka Really Have a Food Crisis? 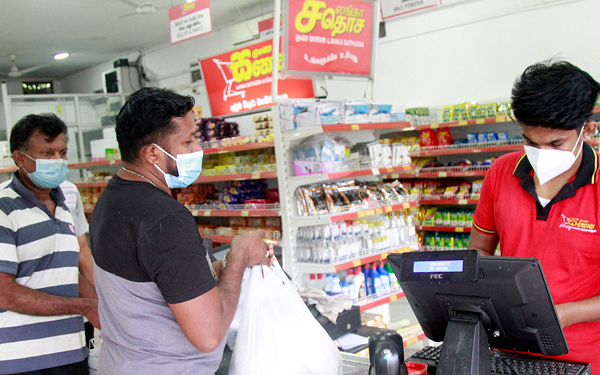 The problem isn’t the availability of food items or essential goods, but skyrocketing prices of essentials due to stockpiling.

For weeks headlines have hit news platforms around the world that Sri Lanka is experiencing food shortages. Reports of essentials such as food and medicine being in short supply have created a very grim picture of the nation and its citizens.

The Sri Lankan Government has been busy denying these reports, calling them blatant falsehoods, citing inaccuracies in such reports. Sights of long queues at the state-owned retailer Sathosa however, paint a different picture, which has since been used by critics and supporters alike to discuss a moot point.

Pandemic or not, Sri Lankans tend to throng at places where food is sold at the lowest price, i.e., the state retailer Sathosa. The retailer, with an islandwide network, is the only one of its kind. It sells staple food items like rice, lentils and sugar at subsidized prices, attracting consumers by the dozens, even before the pandemic. The problem therefore has not been the availability of food items or essential goods, but skyrocketing prices of essentials due to stockpiling.

The fact remains that Sri Lanka is still in the throes of the deadliest wave of the COVID-19 pandemic. As the Delta variant raged on, lockdowns were extended as labour forces were threatened with a deadly disease spreading at an alarming rate. Concerns have mounted over food shortages, but attributing the mounting worries to a government food emergency declaration is unwise.

Sri Lanka depends on considerable volumes of food imports every year. In August 2020 Sri Lanka’s import volumes for food including cereals, dairy, vegetables, and sugar stood at $228.6 million, a sharp decrease from the $332.1 million in 2019.

During the first wave of the pandemic in March 2020, President Gotabaya Rajapaksa announced extensive import restrictions in a bid to save foreign currency outflows and to strengthen domestic industries, with a sharp focus on local agriculture. By September 2020 then-State Minister of Money and Capital Market and State Enterprise Reforms and present Central Bank Governor Ajith Nivard Cabraal claimed that the restrictions were a temporary measure to prevent a foreign exchange crisis. Since then hoarders of food items that are mainstays of a Sri Lankan kitchen, such as turmeric and coconuts, were brought to book by various state agencies, while worries of an imminent food shortage grew.

Adding to these worries was the chemical fertilizer ban approved by the government on April 27, 2021. The ambitious goal was to ban the import of chemical fertilizers and other agrochemicals, with a view to make Sri Lanka the first country in the world to adopt a completely organic approach to agriculture. While proponents of this view, including environmental activist Dr. Vandana Shiva along with many domestic bodies, endorsed the move, critics pointed out that an overnight shift toward organic farming could threaten many local industries, including the country’s valued tea plantations, a major foreign exchange earner. Import volumes of fertilizer decreased from US$ 32.2 million in 2019 to US$ 8.2 million in 2020.

Despite some drastic efforts by the state, a foreign exchange crisis did unfold, with the Central Bank introducing a fresh round of regulations to control foreign currency ‘leakages’, naming over 600 items as non-essentials in August 2021. These non-essential items include telecommunication devices like mobile phones, clothing, household appliances, and even fruits. (This has since been reversed).

In addition to shortages in turmeric and coconut, Sri Lanka in recent times also faced an acute shortage of sugar and milk powder, a staple of the average Sri Lankan consumer diet. The milk powder industry continues to operate at certain losses, unable to keep up with rising production costs. Although the Government provided concessions, industry stakeholders say it is simply not enough with the rising exchange rates and a depreciating Sri Lankan rupee. Meanwhile warehouses hoarding tonnes of sugar were raided and their goods handed over to Sathosa for distribution islandwide.

The operation is handled by Major General M.D.S.P. Niwunhella, appointed by President Gotabaya Rajapaksa as the designated Commissioner General to take necessary steps to provide food at concessionary rates and to ensure availability of essentials. The appointment came soon after the Sri Lankan Parliament passed Emergency laws promulgated by President Rajapaksa, in a move widely acknowledged as a continued demonstration of the President’s faith in the military corps as opposed to traditionally appointed members of the country’s administrative services.

Many Sri Lankans drew parallels to similar measures introduced in the 1970s during Prime Minister Sirimavo Bandaranaike’s rule, whose experiences have been passed down to younger generations, and actively took to social media to voice their concerns in fear of history repeating itself. The memory of those troubled times, when food shortages were aggravated by drought-ridden harvesting seasons, still remain fresh in the minds of the elderly population of Sri Lanka.

But some economic stakeholders like Rohan Fernando, Chairman of Sri Lanka Telecom, the national telecommunications services provider, believe otherwise. Fernando, in fact, is optimistic and views the troubling economic news of the past weeks as a mindset problem. He believes that Sri Lanka’s economic resilience over the years can be relied upon this time too. “Sri Lanka is a small economy…. I think we have got carried away with the pandemic. We have had pandemics, viruses. Forget the Spanish flu, in our lifetime we have seen Polio, Hepatitis, (and) Japanese Encephalitis,” Fernando said during a local television talk show on economic recovery, in which he was a panelist.

Fernando also added that when the global West is affected by troubling events, other countries follow suit in collective panic.

“When these (diseases) were concentrated to our part, the West didn’t take it seriously. But this time, the West got affected and as a result the whole world got affected. They say when the Western countries get a cold, we get pneumonia, that is the way we behave,” Fernando said, stating his belief that the economic crisis can be managed.

Meanwhile, many others see it as a crisis decades in the making. “It’s not something that happened overnight. This historically has been going on for 20 to 25 years. It is stemming from the way our economy is; we are an import dependent economy,” Kasthuri Chellarajah Wilson, Group CEO of Hemas Holdings, a leading public conglomerate in Sri Lanka, a panelist of the same talk show, said.

Sri Lanka needs numerous reforms if the country is to reset its economic development, Wilson said. “We need to do corrections. As a country we have been shying away from reforms and resorting to populist measures, which are like small repairs. In the absence of dollars, there were shortages of certain foods. That was a short-term thing, purely because people could not import it. In the medium term, we will have to answer that and there will definitely be a social impact to the underprivileged.”

“I think we have a crisis, we can’t run away from it,” she added.

Meanwhile MP Anura Kumara Dissanayake, a staunch critic of both leading political factions in Sri Lanka, observes that economic policies in place for years have led to the current shortages in the country. The MP, echoing mounting criticism of the sudden promulgation of the state of Emergency said that, for decades, Parliamentarians have united across the aisle to stand against Emergency rule, owing to its widespread implications, especially its role in civic rights violations.

“There are also racketeers working within this system, which worsens the crisis,” the MP said, addressing Parliament. Criticizing the emergency rule brought through the concentration of power vested with the Executive Presidency, Dissanayake questioned if the Emergency rule was even necessary to set price controls on essential goods. “On the same day the Emergency rule was declared, 12 types of essential goods were announced. But this was not done through Emergency regulations,” he said, questioning members of the Government as to why the state of Emergency was declared. (The Diplomat)