The many failures of the G7 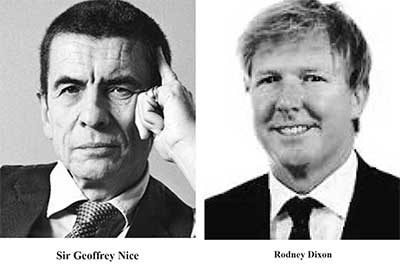 The Mahinda Rajapakse government sought the legal opinion of a group of distinguished international legal luminaries who have been involved in war tribunals and who knew the laws related to conflicts. Reading these expert opinions against the PoE and the OISL reports as well as the biased and interfering statements of the OHCHR head, many would realize that the UNHRC has been compromised and the question is by whom! The legal arguments and the laws quoted by these two distinguished legal luminaries are worth reading to understand the nature of the bias and one-sided propaganda based vendetta that the UN/UNHRC and others have stooped to.

(Quoting PoE report) “Despite grave danger in the conflict zone, the LTTE refused civilians permission to leave, using them as hostages, at times even using their presence as a strategic human buffer between themselves and the advancing Sri Lanka Army. It implemented a policy of forced recruitment throughout the war, but in the final stages greatly intensified its recruitment of people of all ages, including children as young as fourteen. The LTTE forced civilians to dig trenches and other emplacements for its own defences, thereby contributing to blurring the distinction between combatants and civilians and exposing civilians to additional harm. All of this was done in a quest to pursue a war that was clearly lost; many civilians were sacrificed on the altar of the LTTE cause and its efforts to preserve its senior leadership. From February 2009 onwards, the LTTE started point-blank shooting of civilians who attempted to escape the conflict zone, significantly adding to the death toll in the final stages of the war.”

1) Principle of Distinction, military necessity and proportionality, complexities of their application

1. Protection of Civilians and the Principle of Proportionality

2. Use of civilians in the military campaign and as human shields

Application of these legal standards to factual circumstances

Industrialized developed societies rely on science and technology and follow a predictive model in running their nations. In this country, some experts...
Read more
Commentary

Last week Sri Lankan health experts defeated something that should be defeated on behalf of all women, children, elderly and the sick in Sri Lanka. That is stopping the efforts made to sell liquor online. What health experts defeated was a type of ‘tsunami’ which was about to destroy the lives of these social categories imprisoned inside their houses. There is no escape for them because of travel restrictions.
Read more
Commentary

From being proudly called the Granary of the East, from manufacturing massive ships to kings round the world, from commanding respect even...
Read more
Commentary

Similar warnings to Philippines and Pakistan yet to be implemented By Sugeeswara Senadhira Sri Lanka is...
Read more

On 18 March 2021, nine US Members of Congress co-signed a letter addressed to the US Secretary of State Mr. Anthony Blinken....
Read more
WAR CRIMES

Response to the US Congressmen & Resolution 413 against Sri Lanka

Resolution 413 was presented to the US Congress on 18 May 2021 by Deborah K Ross and 4 co-sponsors though 9 US...
Read more
WAR CRIMES

By Malinda Seneviratne  Long years ago I was associated with an organization called ‘The National Movement Against Terrorism’ (NMAT)....
Read more
WAR CRIMES

Some tears are less newsworthy

A note on media representation of conflict in Sri Lanka A PUBLICATION OF THE NATIONAL MOVEMENT AGAINST TERRORISM
Read more
Sri Lanka BriefNews, views and analysis of Human Rights & Democratic Governance in Sri Lanka