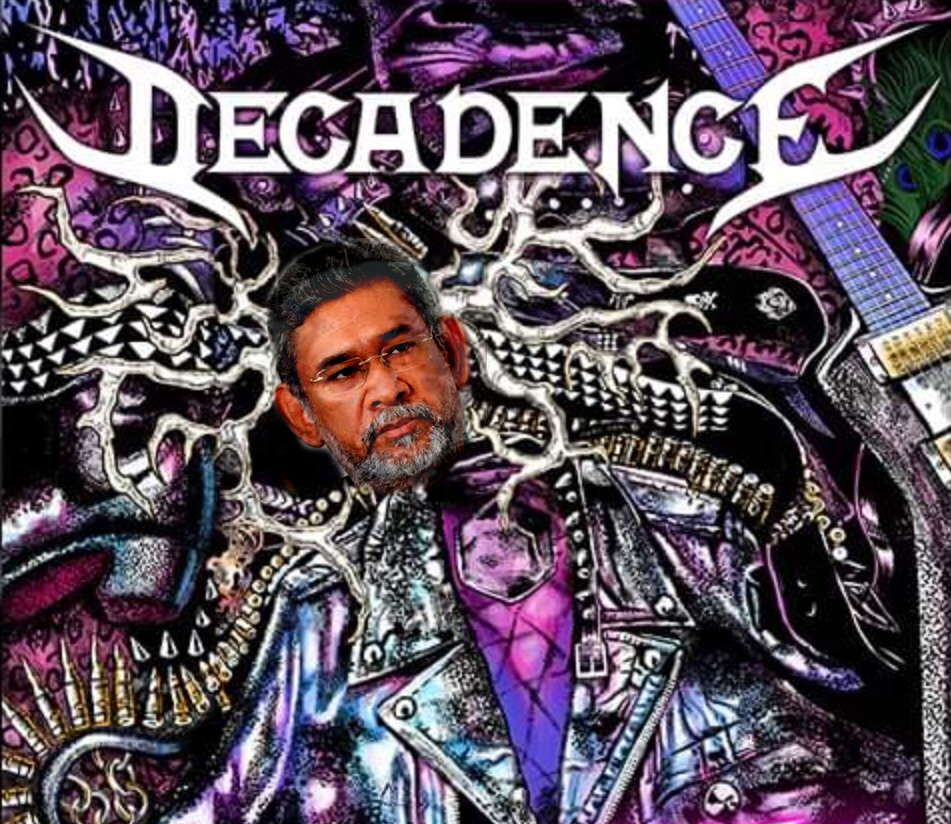 Imagine we are gawping at the dying tail-ends of a tawdry English teledrama called The Scavengers starring Desperado Dayan.

A flickering screen recalls a foreign envoy’s sweet sojourn in Red Square complete with 1917-themed package tour. He goes there with head held high, and somehow returns (with no blame assigned to Mother Russia) a doddering renegade (which we always thought was Kautsky’s first name), now insistently senile, a triple-agent Philby.

Desperado D midst falling leaves dances a dialectic in decay by himself in a dismal autumn of desperation, with the murky sonic backdrop of a rusty needle on an old gramophone scraping out the coda of Tchaikovsky’s Swan Lake.

Why the drama? DJ’s latest screeching for his master’s merchant tabloid, has us scratching our heads, as if scouring the chutty pot for the last grains of burnt rice, trying to understand what on earth this presumably literate son of Mervyn means? Did some CIA agent in Moscow inject him with some chemical befuddlement.

Hear ye this of DJ in a recent Financial Times:

“Like most islanders, we are outspoken, free-spirited citizens who prize our independence. Like most island-nations, Sri Lanka is given to a democratic civic culture, not a collectivist conformism. We just aren’t Confucian!”

Are islanders a particular species of amphibian invertebrates? Has he heard of Slave Island? Has he not heard John Donne: “No man is an island…Ask not for whom the bell tolls, it tolls for thee?”

Alas, he Dayan is a John unDonne.

What subspecies of obsequious inferiority complex is this? What manner of colonial mentality is it to refer to a country, with a protracted political contiguity, as an island?

Dayan’s modus operandi stands exposed. He wishes to diminish an entire country down to his own menial measure adorned in empty praise: “Outspoken, free-spirited, who prize our independence?”
We know well how speaking-out was prized, when he was riding ideological shotgun for his Lumpen Lord Protector, R. Premadasa. Those free spirits are still wailing, headless, flapping about the firmament, with tires smouldering about their necks, demanding a Southern truth and reconciliation that still eludes them.

It is not Tchaikovsky we hear now but Billie Holliday redone: “Southern Trees: They bear strange fruit, Blood on the leaves, Blood at the root. Black bodies singed in the Southern Breeze, Strange Fruit ablaze under Mara trees.” Dayan forgets his flirtation with mass-murder most foul.

“Like most island-nations, Sri Lanka is given to a democratic civic culture”

Really? Are only mainland nations given then to uncivilized despotism? He has become a topographical determinist, geo-hydrocephalus, with the parippu-pickled waters of the Palk Straits dousing his brain.

Is England not an island nation? An England, which has enslaved the world, affecting all to itself a highly rare strain of democracy, while infecting apocalypse everywhere else, with Dayan, the gerontocratic beetle chirping, “Yeah! Yeah! Yeah!

“One of the earliest democratic political systems and political cultures in Asia and Afro-Asia.”

Desperado indeed. That he is a political science professor, makes us shudder. Tired, he evokes the Do-No-More (Donoughmore) game under English colonialism, which reinforced the rule of slave planters, faux feudals, mercantiles and usurers, yes in the United Merchant Party (UMP), he now bats for.

He forgets how at the first so-called elections, held under English despotism, the so-called fathers of independence stood with polu (clubs) outside polling booths to prevent certain classes of villagers from voting. How Burgher planters with shotguns prevented plantation workers from voting. How northern pseudo-Brahmins whipped away certain castes? How whites were reserved unelected seats? He forgets that elections now are mere monopoly media ornaments, which his sponsors excel in playing.

Is it fair and lovely to ask for consistency from keyboard mercenaries? Is it fair or ugly to remind Dayan Jayatilleka that he once claimed to be a communist (albeit self-annointed) and fervently believed in collective decision making, not corporatist dictat based on profit-maximized shareholding, which his newspaper upholds.

Did he not wish for the dictatorship (not of merchants for whom he bats now) but dictatorship of the proletariat? Did he not pepper his purple prose with quaint quotes from Marx and Engels, Lenin and Stalin? And did he not speak democratic centralism?

In truth, we have always been far more social than selfish. Perhaps he should abandon his jesuitical casuistry and look at the Theravada land he claims to perch on.

But now emboldened by the arrival of the advance guard of the US Seventh Fleet that illegally prowls our oceans, which his prosaic papa once editorialized should be a Zone of Peace, on a day of infamy, he like the rest of the dollar-Left pisses out: “We just aren’t Confucian!”

Dayan, the once tricontinentalist, scavenges midst the detritus of white pathology and spits out snivelling Sinophobic saliva. For whom does he flaunt this flabby desperation. Was it to welcome the world’s preeminent representatives of a warmongering rogue state, which DJ no doubt also claims to be democratic: US War Secretary Esper and US Foreign Wars Secretary Pompeo

This is the Dayan who acquired his doctoral accolades from claiming fidelity to Fidel. A Fidel who declared Communist China has the best hope for the world.

What degeneration deigns such amnesic desperation! The swan, if he ever he was one, and not an ugly duckling, lies drowned. His pen and brain soaked in the swamp of opportunism.

As for those strange fruit, the seeds of time will surely sprout again, but not to sway to a foreign rock-and-roll or raga. No senior or junior Lumpen Lord Protector can necklace the future with another imported tyre. The dialectic dances without him.