Democracy in the Land of the Free 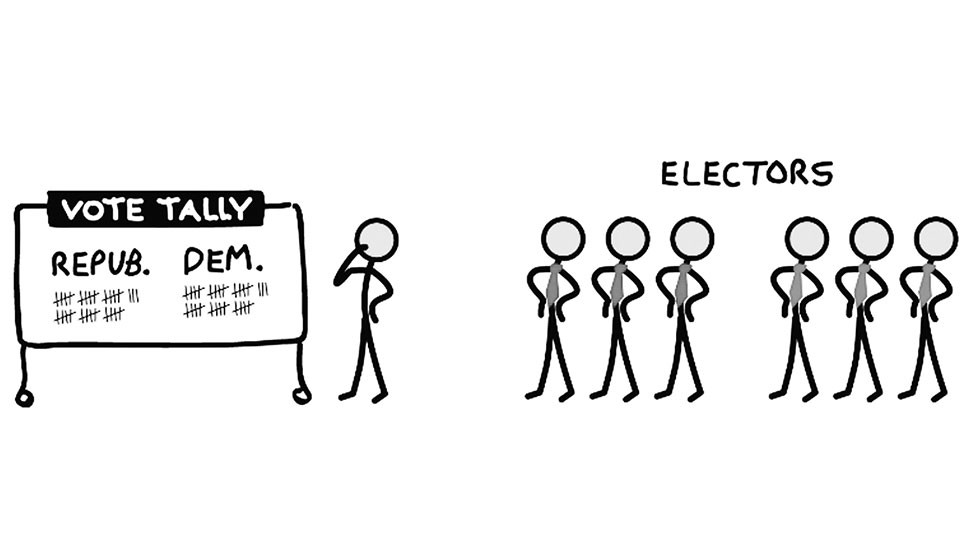 I was moved to tears watching John McCain’s concession speech of 2008 when Barack Obama won the presidency. Such dignity compared with Trump’s mean-spirited crassness! However, McCain lost me when he went on about American democracy being the envy of the world. Biden has been coming out with the same old guff. Joe Biden said: “Democracy is sometimes messy; it sometimes requires a little patience as well but that patience has been rewarded now for more than 240 years with a system of governance that’s been the envy of the world.” Let us look more closely at what Americans delude themselves is enviable.

The November 2019 election in Sri Lanka to choose a president was fairly straightforward. There were 35 contenders but it was essentially a fight between two main candidates. The people were choosing between those two and 52.25% voted for Gotabaya Rajapaksa. He thus became president because a majority of the electorate voted for him. Simple.

In Sri Lanka the people vote directly to choose their president. In that beacon of democracy called the USA, the people do not directly choose their president. The US president is not chosen by the 233.7 million eligible registered voters. The president is chosen by the 538 individuals who make up a strange institution called the Electoral College. The electorate is voting for people called electors. People in all 50 states vote in November and those decisions are conveyed to the electors. The electors meet in mid-December to cast the official ballot for president.

Each state is allotted a fixed number of votes in the Electoral College, based roughly on the size of its population. Electors are generally chosen by the party but each state determines for itself how it chooses electors. Whoever wins the popular vote in a state also wins all of that state’s electoral votes – with two exceptions being Maine and Nebraska, which divide up their electoral votes partly on the basis of who wins the popular vote.

There is no Constitutional provision or federal law that requires electors to vote according to the results of the popular vote in their states but throughout the nation’s history, more than 99 % of electors have voted as pledged. A Republican governor could go rogue and submit his state’s votes for Trump. Or a Democratic governor could do the same for Biden regardless of the actual result. The Republican-controlled Florida legislature considered submitting its own electors in 2000 before the Supreme Court ended the contest between Bush and Gore. The Electoral College distorts US politics, encouraging presidential campaigns to concentrate their efforts in a few states that are not representative of the country as a whole. The Eurovision Song Contest voting system seems much more rational.

George Mason of Virginia was one of three delegates to the Constitutional Convention of 1787 who refused to sign the Constitution. He said, “It would be as unnatural to refer the choice of a proper candidate for chief Magistrate to the people, as it would be to refer a trial of colours to a blind man.” Founding Father Alexander Hamilton wrote: “A small number of persons, selected by their fellow-citizens from the general mass, will be most likely to possess the information and discernment requisite to such complicated [tasks].” In 1787, the Founding Fathers worried that the people might elect a demagogue and set up the Electoral College to prevent this. In 2016, a demagogue with 3m fewer votes than the losing candidate became president thanks to the Electoral College. Trump had an advantage in states with smaller populations and an advantage in the Electoral College. The system of checks and balances was not built to hinder someone like Trump.

In its first major failure, the Electoral College produced a tie between Thomas Jefferson and  Aaron Burr (who killed Alexander Hamilton in a duel in 1804 and was charged with reason in 1807).

There have been five presidential elections in which the successful presidential candidate did not win a majority of the popular vote. In 1824, Andrew Jackson polled 152,901 popular votes to John Quincy Adams’s 114,023; in 1876, there was no question that Democrat Samuel J. Tilden outpolled Republican Rutherford B. Hayes in the popular vote, with Tilden winning 4,288,546 votes and Hayes winning 4,034,311. Hayes was known for the rest of his career as “His Fraudulency”; in the 1888 election, incumbent president Democrat  Grover Cleveland received 90,596 more votes than his challenger Benjamin Harrison but  only won 168 Electoral College votes to Harrison’s 233; in 2000, Democrat Al Gore received 48.38% of the popular vote (50,999,897) compared to George W Bush’s 47.87% (50,456,002).

Three Fifths of a Man

Delegates to the Constitutional Convention from the slaveholding south had their own reasons for not wanting the president to be directly elected by the people. There were roughly equal number of people living in the north and the south; however, one-third of those living in the South were slaves. There was no way they were going to be given the vote but the south would be at a disadvantage if they were not counted. The population number would determine a state’s number of seats in the House of Representatives and how much it would pay in taxes. The compromise proposed by delegate James Wilson was three out of every five slaves would be counted as people, giving the southern states a third more seats in Congress and a third more electoral votes than if slaves had been ignored, but fewer than if slaves and free people had been counted equally.

The compromise gave the slaveholder Thomas Jefferson an advantage over his opponent, the incumbent president and abolitionist John Adams. To quote Yale Law’s Akhil Reed Amar, the third president “metaphorically rode into the executive mansion on the backs of slaves.”

Under the Electoral College, black votes are submerged. Five of the six states whose populations are 25 percent or more black have been reliably Republican in recent presidential elections, even though that goes against normal black voting patterns. Three of those states have not voted for a Democrat in more than four decades.

There are other ways in which the US system is rigged against democracy. More on that next week.

By Padraig Colman
This article was published in Ceylon Today on November 12 2020
Source: pcolman.wordpress.com