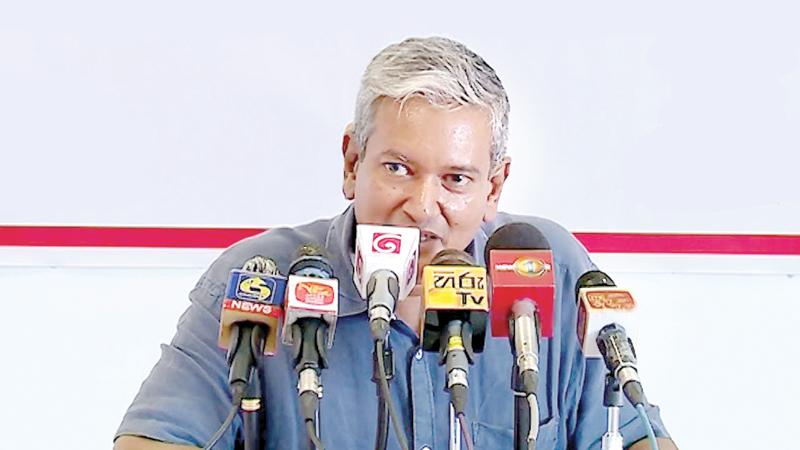 Yuthukama Organisation President and SLPP national list parliamentarian Gevindu Cumaratunga in an interview with the Sunday Observer discussed the future role of the organisation which played a pivotal role in electing President Gotabaya Rajapaksa to office and later securing a two-thirds for the Government.

“The 19th amendment was also flawed due to the ad-hoc amendments brought in during the third reading of the committee-stage debate. We don’t want the same predicament to befall the 20th amendment,” he said outlining his stance on the new Constitutional amendment in the offing.

Q. Yuthukama was a major force behind the election of the current president and the government. Do you think your role is over now, since the organisation’s primary mission has been accomplished? What would be the future role of the ‘Yuthukama’ organisation?

A. The ‘Yuthukama’ organisation was given birth, after the change of government in 2015, which we believe is a direct result of external manipulations.Our key objective was to defeat that unseen foreign forces. Gotabaya Rajapaksa’s victory and securing two-thirds majority for the government was compulsory to achieve our objectives. But there are bigger expectations for forming ‘Yuthukama’. That is to re-establish a society which values justice and morals, a righteous society.

We were more worried and alarmed about the strategy used to defeat Mahinda Rajapaksa in 2015 than his defeat itself. For example the construction of the Southern highway was completely portrayed as a means of corruption, creating a public opinion against those behind this public centric development project.

The people were made to forget about its numerous advantages for the masses. We are not against investigating corruption but unfair labelling and baseless allegations cannot be condoned. The 2015 election campaign by the then Opposition which was full of jealousy and vengeance, was harmful to the whole society.

Former President Maithripala Sirisena’s victory through conspiracy was portrayed as a huge achievement. But the best lessons in our history didn’t come that way. Prince Gemunu openly criticised his father King Kavantissa’s attitude towards invaders and endured many hardships as a result.

Keppetipola Disawe too officially handed back the army and the weapons which were officially under his command to the Colonial rulers before defecting to save his people. He lost his battle but for us he is a real hero. This teaches us that winning is not always heroism. For us, it is not only the goal – the path too is vital.

Unlike the West which is always about winning their own rights, our world revolves around responsibility (yuthukam) towards others. This attitude paid huge dividends during the Covid 19 pandemic.

So we believe our role is not limited to electing the president and the government. We have a long way to go to create a disciplined and a humane society within this country. We believe even in a small way, we can be an example to the world too.

Q. How do you plan to work with the government in the future?

A. The society has a negative attitude towards the people’s representatives, they are being accused of not having a set policy or a firm opinion on any issue. People think that they can be bought over by the sitting government or by various foreign forces. We hope to change this attitude by standing for principles.

We will strive to be a bridge between the people and the leaders, mediate with the government on issues affecting the people and direct it on the right path.

All actions of the 2015 government, was choreographed by foreign forces. The Geneva resolution and other ill conceived agreements were forced upon the country.

We will play a constructive role to help the government in its good deeds such as the project to train and employ 100,000 youth of low income families while constructively criticising the actions that need revisiting. We will try to create knowledge and awareness of what has to be done. The employment project for low income families will transform our society.

We don’t believe that ‘Yuthukama’ is also a 100 percent perfect outfit, we will have shortcomings too. But our aim is to correct ourselves, to be an example to the society.

Q.There is a lot of emphasis on the President – as a person who will protect Buddhism and the Sinhala community. Do you think too much emphasis on that will lead the other communities to doubt genuine intentions of the government which in turn will pave way for more Saharans and Prabhakarans to come by?

A. Protecting Sinhala Buddhists does not mean that he will work against minorities. We want to save our traditional way of life from imperialist elements and not from the minorities here. That has to be made clear. The Tamil speaking people are not our enemies.But some arguments of Tamil politicians are very unfortunate. During a recent interview with a TV presenter MP Sumanthiran said he was not discriminated in working as a lawyer since the language in the Supreme Court was English.

I felt very sad to hear his response. He went to Royal College in Colombo and was fortunate to be able to work in English but what about the other rural, Tamil youth? Some Tamil politicians say that they had a kingdom in Jaffna and the Colonial rulers handed over that land to Sinhalese before leavingthe country. If they believe this story, they should be angry with the British rulers and the English language shouldn’t they?

Most of the Sinhala Buddhist forces have united to elect Gotabaya Rajapaksa to office this time. It is time for all communities to unite and come together. Respect should be a two way thing. It is unfair to ask Sinhalese to respect them when they desecrate our monuments and national assets. Shouldn’t all Sri Lankans admire Tissa Wewa, Ruvanweliseya?

The SLFP, after two decades has been able to elect an MP from Jaffna district in the last election. It is a good trend. There is a misconception, that Tamil people left mainstream politics after Sinhala was made the official language and the introduction of the quota system to universities. These are all myths. In 1956, the SLFP government made Sinhala the official language, but till his assassination in 1976, SLFP member Alfred Duraiappah was Mayor of Jaffna. In the 1982 Presidential election, the highest votes from the Jaffna district was obtained by SLFP candidate Hector Kobbekaduwa. These examples show that the ordinary Tamil people had no hard feelings against the steps taken to de-colonise our country.

Q. What is your view on the issues of the Tamil speaking people?

(Justice Paranagama of the Disappearances Commission at the conclusion of the Commission’s months long ‘hearings’ said if the Tamil people are given proper solutions to their issues, which are very basic, they will never be a cat’s paw of any extremist/political force.)

A.We agree that there are common issues for all the people. but we must find out whether the Tamil speaking people have specific issues. Of course, the people in the North and the East who had to bear the brunt of the 30-year battle against terrorism have specific shortcomings.For example, I don’t understand why Sumanthiran can embrace English language but resent Sinhala, a national language of his own country. If that is the attitude, we will never be able to find unity and harmony.

As far as the university quota system is concerned at one point the Jaffna district had more schools with GCE Advanced Level science classes than even in the Colombo district. In the 1980s Anuradhapura, the biggest district had only two such schools. How many schools with Science stream are there in Colombo city itself?

This disparity led to the quota system being introduced for university admission. It not only affected the Jaffna district, it affected Colombo as well. There is no communal facet to this issue.

This system was not intended to deprive the Tamils in the North, in contrary, it helped the Batticaloa district in the East to send more Tamil students to the university. Karuna Amman in an interview with India’s Frontline magazine acknowledged this fact.

They must realise terrorism and separatism brought about nothing but destruction and an entire generation was lost as a consequence.We are ready to share equal rights with them but if they put forward unreasonable demands then we will be compelled to respond.President Gotabaya Rajapaksa did not hesitate to express that stance and we respect him for that.

Q. Yesterday the Cabinet spokesman said the government accepts the ownership of the original 20-A Bill, any amendments, will be accommodated at the committee stage debate which is the proper procedure in case of a constitutional amendment. Your comments?

A. We regret that stance of the government.

Q. Could you elaborate on your answer?

A. As a government the intention should be to present a flawless amendment to the constitution. It is true that the proposed law can be changed before enactment in Parliament. The 19th amendment was also flawed due to the ad-hoc amendments brought in during the third reading of the committee-stage debate. We don’t want the same predicament to befall the 20th amendment. The then Attorney General submitted last minute amendments while it was challenged at the Supreme Court.

Q. You said you met the President and the Prime Minister on the 20-A. Would you like to comment on what transpired at these meetings?

A. At the Parliament group meeting, we conveyed to the Prime Minister the need to discuss the Bill before finalising it.On Friday, at the party leaders meeting the PM appointed a committee to study and make recommendations on the controversial aspects of the amendment.In parallel, the members of the Yuthukama Organisation and National Joint Committee met the President and we expressed our stance. President agreed to revisit the Bill before presenting it to Parliament.

The 1977 Constitution is designed to safeguard the UNP and that government. All the amendments thereafter also strived to consolidate power for the government in office.

We accept that the Constitution can’t be corrected by ad hoc amendments. One of the major promises of the Yuthukama Organization in the President Rajapaksa’s campaign trail, was to undo constitutional flaws and put away this ‘time-bomb’ for good. We said the present constitution should be completely replaced. People gave our Government a 2/3rd majority and they are hoping for a new beginning, a new constitution.