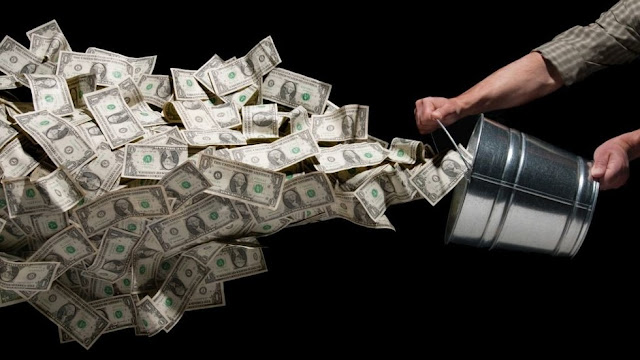 Sometime in the year 1992, an Economics student at the University of Peradeniya confessed confusion over a comment by Dr S B De Silva regarding multinational corporations. Apparently he didn’t have an issue with MNCs and the student had been shocked. Elaboration cleared it all up. What he had meant was that it doesn’t really matter, strictly in an economic sense, who rakes up the profits from a capitalist system; surplus value is anyway extracted and the worker is exploited. Whether the profiteer is white or black, an MNC or a local, is therefore irrelevant.

What’s the relevance of all this, though? Relevant in the context of Sri Lanka’s current economic crisis, nay meltdown, and the search for succour, with experts and politicians out-screaming one another with the acronymic mantra, ‘IMF, IMF, IMF!’ Envoys of all hue are being sent, it is reported, to various countries. Foreign delegates are a-visiting, pledging friendship and support.

The bucks aren’t really flowing though, at least not in volumes that can ease burdens or relieve anxiety, never mind rebooting the system and setting the country back on its proverbial feet. Through it all there is a discernible hope-slant towards the USA-led sections of the international community and of course the US-controlled multilateral (sic) institutions, the UN system and the Bretton Woods Institutions. Relevant happy-pills, so to speak, are being talked of, predictably predicated with misbegotten economic theories and uttered with appropriate tones of humbleness. It’s a ‘dollar crisis’ after all, or rather the absence of dollars.

Leaders cannot be faulted or rather their dollar-fixation is understandable. After all, that’s all they’ve known when it comes to external assistance. Dollars, pounds and of late euros. After all, leaders as well as their advisors have for decades worshipped politically-motivated and ideology-laden neoliberal economic theories that are less outdated than intellectually untenable. For years. No, decades. Many of them, no doubt, have personal ties with North America. It’s almost as though they’ve internalised northamericanism to the point that they, like the vast majority of North American kids, are pretty much ignorant of the world outside that continent. China and Russia for example exist only in terms of a black-balled list.

The world is not flat though. Neither is it static. The truth rises regardless. The long twentieth century of American domination is ending or, according to some, has ended. Prime Minister Ranil Wickremesinghe himself admitted a few years ago that Sri Lanka would have to look towards the East.

And yet, even those who talk of system-change still bank on the IMF, which is essentially a prescription for kicking the can down the road. The centre of global gravity has shifted and those who are in denial are the last that anyone should go to for help. If not anything else, the very fact that US belligerence succeeded in driving a knife into its own economic heart by imposing sanctions on Russia following the invasion of Ukraine.

Shiran Illanperuma in an article in newswire.lk titled ‘Eurasian integration is a prerequisite for de-dollarizing Sri Lanka,’ has detailed the relevant history pertaining to the rise of petrodollars and the steady decline in dollar-hegemony. The world is fast diversifying away from dollar-dominated assets, he argues, in order to manage economic and geopolitical risks. It’s worth quoting:

‘In 2019, Russia halved the dollar-denominated share of their forex reserves, opting to expand Euro, Yuan and gold holdings, which now comprise around 90% of Russia’s reserves. Meanwhile, China has been its US treasury holdings since 2015, opting instead to lend to developing countries through the Belt and Road Initiative (BRI) and accelerate Eurasian economic integration. By 2021, IMF data showed that the US Dollar share of global reserves had dropped to its lowest levels since 1995. According to a 2021 survey by London-based think tank OMFIF, 30% of central banks planned to increase their holding of Yuan, while 20% planned to reduce their holdings of the US dollar.’

Shiran argues that Sri Lanka can’t really de-dollarize despite strong ties with the de-dollarizing bloc, Russia and China, because the export address is essentially ‘West.’ Fair enough. One reason is that Sri Lanka has never explored other markets, because just like leaders, industrialists are geographically challenged. They just don’t see Russia or China. Or India, one might add. At the same time, given the current crisis, we are in a situation where production is grinding to a halt. If there’s nothing much to export, then fixations or lack thereof regarding export addresses cease to matter.

Of course the US, EU and the UK will have none of it. Our leaders or rather their advisors would be wary of venturing along untrodden paths. India, in a way, might be less bullish about policy preferences since India has committed herself to a policy regime that de-dollarizes without uttering the term. If India so loves Sri Lanka, as Indian leaders, diplomats and visiting dignitaries are fond of saying, then India would be honor-bound to protect Sri Lanka if the US, EU and UK try to arm-twist policy-makers into continued dollar-submission.

So, why not China and Russia? The bad boys? Is that the objection? Well, what’s the difference, S B De Silva would have certainly asked. As Shiran points out these countries have had long histories of friendship with Sri Lanka. They’ve not arm-twisted or sought to mangle us in international forums. Anyway, they call the shots now, whether we like it or not.

How about existing debt, did someone squeak? Yes, there is existing debt. Compensation for the loot is yet to be paid. The loan-sharks can be directed to the British, Portuguese and Dutch. How about the fact that we are exchanging one system of dependence to what would be a different system of dependence? As mentioned, one can respond thus: ‘what’s the difference except the first set is broke and the other set is not; the first will play hard ball and the latter have not and may not; the first is struggling and the other has the resources.’

But why be dependent at all? Well, look around you. We need not have come to this, but we have. We opted to party on borrowed bucks for decades. We didn’t develop our industries, we opted for an agricultural policy that enslaved us. We embraced an import mafia. We can turn all that back, but that will take us a lot of time. Should make the effort, but there’s an ‘in the meantime’ that we have to contend with.

The aragalists and would-be champions of the aragalaya aren’t saying #dedolarizenow though. Makes one wonder, does it not?