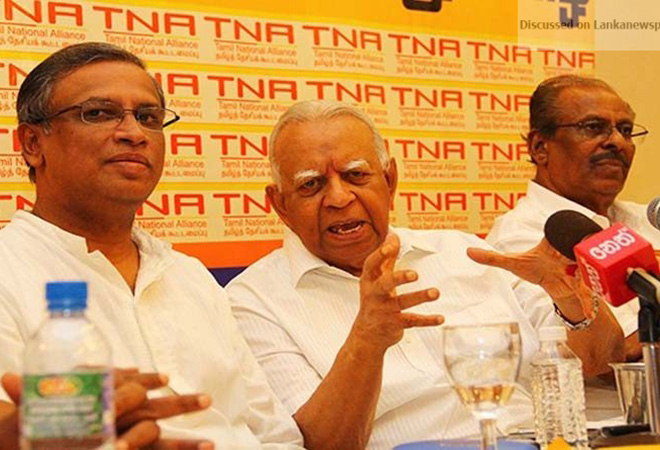 TNA Leader R. Sampanthan is reported to have lashed out at his critics, saying that nobody could intimidate or ban his party, which, he has insisted, had no affiliations to the LTTE. This has been his response to Minister Sarath Weerasekera’s recent speech in Parliament. While Weerasekera was inveighing against the TNA for promoting events to commemorate dead LTTE cadres, a TNA MP said the JVP was free to remember its dead leaders and, therefore, the Tamils should not be denied the right to hold such commemorations.

The TNA cannot hoodwink those who are aware of its past deals with the Tigers. It was the LTTE that formed the TNA, in 2001, by bringing together several Tamil political parties whose leaders were willing to sell their souls to Prabhakaran. About two decades on, the creature is trying to disown the creator!

The TNA, which is now on a mission to defend democracy, had no qualms about recognising Prabhakaran, who did not have representation even in a local government institution, as the sole representative of the Tamil speaking people; it did a lot of dirty political work for him. One may recall that it was TNA leaders who announced the LTTE’s decision to boycott the 2005 presidential election. They made that announcement at a media briefing, in Kilinochchi, following a meeting with the LTTE, about one week before the election, which was held on 17 Nov. 2005. Besides, the TNA spoke for the LTTE in Parliament as can be seen from the Hansard reports. So, how can the TNA claim it had no affiliations to the LTTE?

The fact that the TNA was created by the LTTE and remained a puppet in the hands of Prabhakaran does not mean it has no legitimate right to engage in democratic politics, at present, or anyone has a right to ban it. It has the same rights as other democratic political parties, and they must be respected.

The TNA, however, ought to realise that its pro-LTTE leanings have not helped shore up its crumbing support base. It has been losing its appeal to the voting public in the North and the East, as evident from the severe erosion of its vote bank over the last 16 years or so. At the 2004 general election, it secured 22 seats, of course, with the help of the LTTE, which prevented other political parties from campaigning in the areas under its control so much so that the European Union polls observers noted, in their report, that what they had witnessed during the election period, in those parts of the country, was the very ‘antithesis of democracy’. The TNA managed to secure only 16 seats at the 2015 general election, and the number of its seats has now dropped to a mere 10.

Meanwhile, the LTTE and the JVP are chalk and cheese where their agendas are concerned. Both resorted to terrorism to achieve their goals, which, however, were poles apart. The LTTE strove to divide the country while the JVP sought to grab state power to establish a ‘Marxist’ regime. The LTTE had no political agenda, at all, for it did not believe in democratic politics; it formed a political wing only to pull the wool over the eyes of the international community and gain some legitimacy. The JVP has had a political agenda, which enabled it to survive the annihilation of its military wing, in 1989, and remain relevant in national politics, to some extent.

The JVP’s meteoric rise in electoral politics in 2004, when it secured 39 seats at the general election in that year as a coalition partner of the UPFA, led some political observers to claim that it had come of age as a mass-based political party, but its stunning electoral performance was possible because of its alliance with the SLFP. The number of its seats plummeted when it chose to go it alone at subsequent elections. It is now left with only three seats.

The LTTE has not been able to make a comeback as it had no political goal. Prabhakaran outsourced its ‘political work’ to the TNA, having eliminated all democratic Tamil political leaders who refused to be consigned to political servitude. In fact, he considered democratic politics an obstacle to his separatist project.

The TNA may be supporting pro-LTTE events and shedding copious tears for the Tiger cadres who are either dead or detained. But, obviously, its leaders do not wish for the revival of the LTTE, for they know they will be given a choice between political servitude and physical elimination in the event of the LTTE raising its head again. Before 2009, the LTTE used the TNA to advance its military agenda, and now the TNA is using the LTTE’s cause to further its political interests, but without much success, as can be seen from its poor electoral performance.