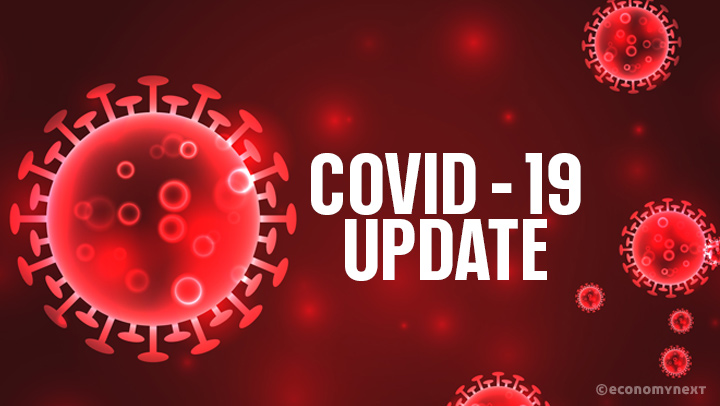 The “Fish Market Cluster” seems to have settled somewhat with no major spikes observed. PCR tests have been conducted continuously in vulnerable areas and the results suggested a decline compared with the earlier stage. Altogether 150,599 PCR tests were done during the last two week at an average of 10,750 per day and the positive rate stands at 4.00%.

As of now, Colombo has the highest caseload in the second wave (8,386 cases), followed by Gampaha (5,730 cases) and Kalutara (873 cases).  Cases in Colombo surpassed those in Gampaha owing to the “Fish Market Cluster”.

Several steps have been taken to control the spread in Colombo including continuous isolation, curfew and lockdowns. Analysis indicates a decline of cases. It is observed that some of the cases are coming from a few controlled sub-clusters (like police, prisons and construction sites.,etc), while other cases are from flats and/or slum areas, especially in Colombo North. PCR and antigen tests are being done in these areas.

Thus, thus, all slums in Colombo North, East, Central and South, all flats in Modara, Mattakkuliya, Maradana, Dematagoda and Borella are subjected to continuous testing, just as was the case with the garment factories in Katunayaka. The plan is to develop capacities to conduct 15,000 PCR tests per day.

There are second and third order effects of spill-overs of the “Peliyagoda Fish Market Cluster” in some other districts and this is evident in areas such as Bandaragama (Atalugama), Alawathugoda (Arurana), Nuwara Eliya (Maskeliya) and Puttalam (Chilaw). However, in all these cases, the origin of the virus can be traced back either to Colombo or to the Gampaha area. It is likely that Atalugama and Akurana are going to be under scrutiny for the possibility of developing into new sub-clusters. Curfew has already been imposed in both areas to prevent any outbreak.

Isolation in Colombo North had to be re-imposed from November 23, 2020. Keep in mind that some areas in Colombo North are in isolation since October 22, 2020 – almost one month! Technically speaking, 2 incubation cycles have already passed, but isolation needs to be continued as new cases are still being reported from those areas, especially from isolated areas / flats.

How does this happen, you may wonder. Consider that the Brandix Cluster diminished only after 28 days (that’s 2 incubation cycles), this means there is still movement of people despite all isolations/instructions; thus cross infection takes place. The lesson is simple: even the most determined and heavily funded information-dissemination campaign will not result in everyone abiding by protection protocols. There will be some who are negligent.

There was some unrest in Colombo North during this week. This is not unexpected. If anyone has to be stuck in a flat for a week and curfew is declared even before they get their basket of rations, he or she would certainly be on edge or worse. It wasn’t all that innocent, however. After all, none of those who are shedding crocodile tears now didn’t even notice these people for an entire month. That said. There are genuine concerns and these need to be addressed soon.

Let’s consider the numbers pertaining to the second wave now.
As of now 83 deaths have been recorded against 17,934 positive cases at a rate of 0.46%.Of the 83 cases 26.51% are actual COVID deaths, other cases have been identified as COVID during investigations after death. Furthermore, 25.30% cases are symptomatic, 63.86% are male, 79.52% are above 50 years of age, 96.23% are with underlying adverse health conditions.

There’s a message here. We must protect our elderly population and especially those among them who are in ill health. This is very important. We need to be serious about them. Checking the number of deaths in the evening news is fine, but we must recognise what are priorities are!

TESTING: Altogether 777,610 PCR tests have been conducted in Sri Lanka and of this 480,322 were done during the second wave. Obviously we need to conduct more tests, irrespective of whether it’s PCR or antigen. Needless to say, the more infected we identify the better we are able to keep the rest of society safe.

This has to be said and said again and again: everyone must act responsibly and do their best to ensure that others also act responsibly to control the spread. It appears that no one is interested in finding out how the virus came to Sri Lanka, whether there is community-spread etc. This happens when there are daily deaths. Now people want to know when the vaccine will arrive. The truth is that various vaccines are still being tested by those who developed them. And yet some want Sri Lanka to get it down right away. Maybe they think that they and every other Sri Lankan are lab rats!

In the end, the responsibility lies with all of us. If we are all proactive and responsible, we can be optimistic. We need to follow protection protocols to the letter — keep social distance, wear masks, wash hands, be conscious of guidelines when traveling, working in the office, being in groceries., etc.  EVERY SINGLE DAY. EVERY SINGLE MINUTE. We will continue to hear about new cases and new deaths, but we need to start going to work, our children need to go to schools, the economy must continue to move, LIFE HAS TO GO ON.

[Information for this comment was obtained from various sources including the Epidemiology Unite, hospitals, Police and security forces]