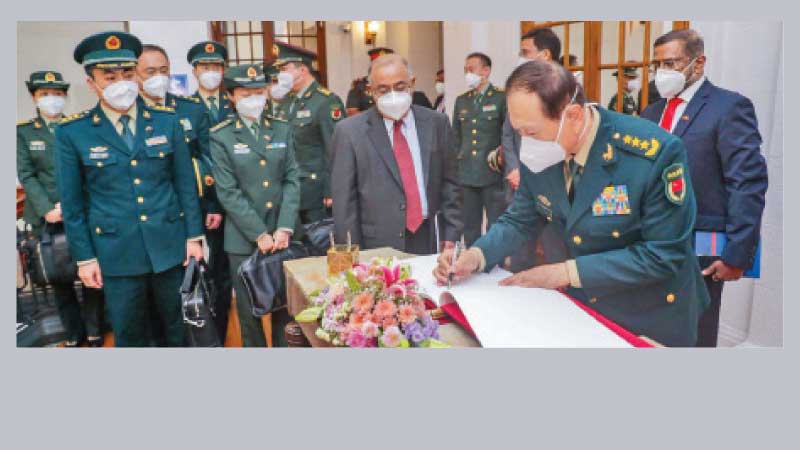 The intensification of the COVID-19 pandemic in India has caught New Delhi on the back foot in more ways than one. While it continues to deal with the fallout of the second wave of the pandemic, its domestic travails inevitably have an impact on the dynamics of its foreign policy. On the one hand, instead of emerging as a regional powerhouse supplying vaccines to its neighbours, it has stopped almost all vaccine exports and has had to rely on overseas medical assistance.

On the other hand, it has forced an element of normality in its relations with China. This is evident from President Xi Jinping’s letter to Prime Minister Modi offering help to India to cope with the pandemic. This is the first known communication between the two leaders following the onset of the pandemic in early 2020 and the Sino-Indian border crisis of April–May last year.Simultaneously, there was a telephone conversation between India’s External Affairs Minister S Jaishankar and Chinese Foreign Minister Wang Yi. The Indian Minister spoke to his counterpart on the importance of China’s transport corridors and cargo flights remaining open to facilitate the movement of materials to deal with India’s COVID upsurge. As part of the conversation, he did mention that the process of disengagement along the LAC remained “unfinished” and it should be “completed at the earliest”.

Meanwhile, China seems to be headed for a sweet spot. Its relatively undamaged economy is doing well and its national mood was manifested by the April 28 launch of the core module of its planned international space station, which is a major indicator that business has returned to normal there. Beijing hopes to have its space station running by the end of 2022. And incidentally, China has moved to fill the gap created by India and has promised vaccines and other supplies to countries like Bangladesh and Nepal.

On April 27, Chinese Foreign Minister Wang Yi hosted a video conference with counterparts from Afghanistan, Bangladesh, Nepal, Pakistan, and Sri Lanka, where Beijing proposed a number of measures to promote anti-pandemic cooperation among them, as well as to promote economic recovery to get on with the Belt and Road cooperation. India was invited but chose not to attend.

The return of normality in China is important, because that is something that has so far eluded the US and India. This will have an impact on geopolitical dynamics, especially the revised Indo-Pacific strategy of the Quad nations. China is the principal trade partner of Australia and Japan, while it is number two for the US. Incidentally, according to Chinese data, bilateral trade in goods between India and China touched US$ 27.7 billion in the first quarter this year, being a whopping 42.8 percent year-on-year increase.

With the Japanese ratification of RCEP, things are on track for the agreement to come into force in January 2022 as the biggest trade bloc in history. Beijing is the trade bloc’s key anchor with north-east Asia, comprising fellow members Japan and South Korea, making up three of the largest four economies of Asia.

Elsewhere too, Beijing is on the move. At the end of April, China’s Defence Minister General Wei Fenghe toured the South Asian region, with visits to Bangladesh and Sri Lanka. A major feature of the visit was the assistance China has given to Colombo to deal with its COVID-19 crisis which intensified in recent weeks. Beijing has extended over US$ 2 billion in loans and a currency swap facility to Colombo to deal with the economic strain of the pandemic. Sri Lanka has an outstanding debt of over US$ 5 billion owed to China. In the remarks in the Dhaka leg of his visit, General Wei spoke of the importance of countries in the neighbourhood resisting “powers from outside the region setting up military alliances in South Asia.”

Before coming to South Asia, General Wei visited Vietnam, where he met the Communist Party General Secretary Ngyuyen Phu Trong and President Nguyen Xuan Phuc. In his remarks, President Phuc said that Vietnam would oppose “any forces’ interference in China’s internal affairs”— a reference to Taiwan. He added that Vietnam “will never follow other countries in opposing China.” The unstated subtext of the tour seems to be the need to counter the activities of the Quad, which had moved aggressively to declare an all-around strategic competition with China in the Indo-Pacific region.

As for the US, it continues to maintain a tough stance on China, as was evident from the Alaska talks. But it is focused on a longer-range competition. Speaking in the recent Aspen Security Forum, US National Security Adviser Jake Sullivan declared that the goal of the Biden policy was “not to contain China.” Indeed, he went on to add, “the Quad is not fundamentally about China. It is about this affirmative agenda that these four capable democracies can set.”

The Biden team is acting along the Interim National Security Strategic Guidance which says, “the core strategic proposition” is that: To be strong abroad, “requires the United States to build back better at home”. This process has barely begun and the US is not likely to be interested in further destabilising ties with a key trading partner. A comprehensive review of US strategy on China is still being worked out, so the Biden administration policy could well see a great deal of continuity, as well as some cooperation, and even accommodation, with China.

A new Indo-Pacific strategy was outlined at the Quad virtual summit on March 12 by President Biden, who indicated that what the US was looking for was achieving stability in this important region, roiled by Chinese actions in Hong Kong and the threats to Taiwan. In his remarks, he spoke of the importance of kick-starting the US economic recovery, though he framed the commitment to an Indo-Pacific “governed by international law, and committed to upholding universal values, and free from coercion.”

The goal of the US policy is to manage China’s future behaviour, rather than undo things that have already happened. In his first speech to Congress at the end of April, Biden pledged to maintain a strong military presence in the Indo-Pacific. He said that as China was “closing in fast” and the US had “to develop and dominate the products and technologies of the future.”The US economy is also doing well and Biden had put forward an ambitious plan for national rejuvenation. The problem is that the US remains a politically divided society and getting plans to work on the ground is not going to be easy. Writing in the Financial Times, Demetri Sevastopulo pointed out that there are two key events in 2022 that are important for both China and the US. Biden must win the mid-term elections against the ongoing challenge from Donald Trump. And Xi Jinping must keep the Communist Party of China united as he seeks another five-year term at the National Party Congress scheduled next year. Both are likely to find that they need to play tough till then, but that does not mean we will see the kind of confrontations that took place in the western Pacific in the last year of the Trump administration. Indeed, American officials have signaled that there could be some guarded engagement as well.

All of this provides little comfort to New Delhi which is in the midst of negotiating a pull back by China in the eastern Ladakh area. Prime Minister Modi’s remarks in the recent Quad summit were suitably anodyne and low key, though New Delhi could be a major beneficiary of the new American posture. Since then, India has been overwhelmed by the COVID tsunami which reduces the room for manoeuvre. Given the intensity of the current wave of the pandemic, it will be a while before the Government can focus on external diplomacy. The current wave is yet to recede and even when it does so, New Delhi will have to focus on plugging the dangerous holes that have shown up in its administrative and public health systems and anticipate further waves.All this is even as India grapples with China in eastern Ladakh and seeks to persuade Beijing to restore status quo ante there. The message from Beijing seems to be that India better be prepared to accept the fait accompli. This could mean pressure on New Delhi to escalate the situation there as in the case of Pangong Tso. That has its own risks. (Observer Research Foundation)