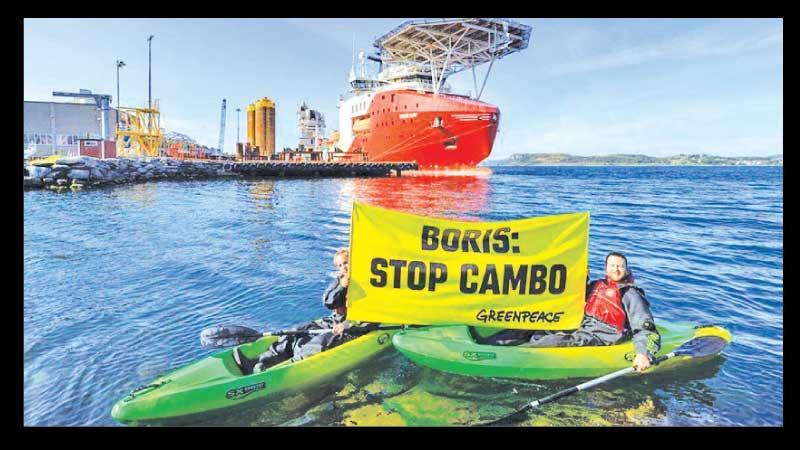 BY DR. THILAN U. HEWAGE

It is not easy to avoid the glamourous pictures and promising sound bites emitting from Glasgow, Scotland about the “Conference of the Parties” (COP-26), UN’s annual conference on climate change, reaching every corner of the world these days through the propaganda network of international media owned by rich countries.

The UN has conducted this conference every year since 1995 starting with the first COP in Berlin, Germany missing only the year 2020 due to Covid-19 pandemic. It makes this year’s COP in Glasgow the 26th and the one that would be held in the year 2100 the 105th climate conference, if it is held every year from now.

The year 2100 is important since it is the last year of this century and most of the discussions and agreements signed during these conferences often mention 2100 as the target year. Out of previous twenty-five COPs the 3rd that was held in Kyoto, Japan in 1997 and the 21st that was held in Paris, France in 2015 have been mentioned more than the others due to major agreements reached at those.

Two consistencies one would find through the proceedings of all these meetings are: i) the unanimous agreement of all the participants of the fact that no country is anywhere near the targets set in the previous year and the rates at which they are working on them are nowhere near what they are supposed to be, ii) the harm they cause by burning so much fossil fuel in traveling across the world to gather at one place with their entourage which also makes a lot of media people, industry lobbyists and even protesters travel to the same venue.

Even though the Covid-19 pandemic has led to an unprecedented drop in global fossil CO2 emission in 2020, it is expected to grow back even beyond the pre-pandemic levels by next year. That might be an indication of the thinking pattern of majority of the citizens of the world where we are not ready to stop using fossil fuel unless we are threatened with death and forced to be indoors.

However, current climate commitments put the world on track to be warmer by almost 30 C which would be catastrophic beyond anyone’s imagination. Scientists have predicted that even if the Earth gets warmer by 1.50 C above pre-industrial levels hundreds of millions of people will experience devastating heat waves, droughts, severe weather and, sea level rise and an overwhelming number of animal and plant species will face extinction.

As long as the average person is a willing consumer of fossil fuel and products made using such energy there will be multinationals and even small and medium entrepreneurs who would try their best to harvest the maximum profits by selling it. Big businesses in the fossil fuel industry not only have the best lobbyists working for them influencing policy makers in their own countries as well as in the international arena, but also, they have found ways to influence the research and development programs in the best universities around the world so that they can counter any report that may seem harmful to their business.

It was no surprise to see media reports about leaked documents that revealed how countries were trying to change a crucial scientific report on how to tackle climate change. Those documents had revealed Saudi Arabia, Japan and Australia were among countries asking the UN to play down the need to move rapidly away from fossil fuels. It also shows a number of countries and organisations arguing that the world does not need to reduce the use of fossil fuels as quickly as the current draft of the report recommends.

BBC reported that an adviser to the Saudi Oil Ministry had demanded that certain phrases be eliminated from the report and a senior government official from Australia had rejected the conclusion that closing coal-fired power plants is necessary even though ending the use of coal is one of the stated objectives of the COP-26 conference. After negotiations Australian Government made a timely announcement about the decision to close all its coal power plants. But the essence of the announcement is in the details.

The decision is to achieve such closure by 2040 where the last one of those plants was already scheduled to be closed by 2042 due to high maintenance cost and inability to compete with lower production costs of renewable energies. At the same time the Australian Government has asked another coal power company in the country to extend their scheduled closure by two more years till 2028 and has agreed to provide funding for a feasibility study for a new coal power plant in Queensland to satisfy local MPs and Senators. A senior scientist with links to the Indian Government had warned that coal is likely to remain the mainstay of energy production for decades because of what they describe as the “tremendous challenges” of providing affordable electricity.

India is the world’s second biggest consumer of coal while Australia is a major coal exporter and Saudi Arabia is one of the largest oil producers in the world. The US Government, after staying out of Paris agreement during Trump’s Presidency, is still pledging that they will achieve net-zero (neutralising the effects of Greenhouse Gases produced within the country) by the year 2050, though there is a possibility that the country might welcome Donald Trump or someone else who might even be a stronger denier of climate crisis as the President in 2024.

The biggest display of hypocrisy is UK Government’s approval of the newest drilling site for petroleum in Cambo oil field in Scotland just a few hundred kilometres away from Glasgow where the COP-26 is being held. A joint venture of Shell (Royal Dutch Shell PLC) and Siccar Point Energy of the UK, Cambo oil project is expected to produce 170 – 180 million barrels of oil over 25 years from 2022. One of the explanations given by the Governments of Scotland and the UK was that the license to drill was approved 20 years ago and the companies are just at the stage of starting the project after all the preliminary work. What was approved 20 years ago was the request to do a feasibility study and explore the possibilities. The Cambo field was found to be rich in oil and natural gas capable of providing over 800 million barrels. The companies acquired the rights to the field and got the green light (officially) to drill only in 2017.

These are just a few examples of double games the rich countries play while being the biggest polluters and producers of greenhouse gases and expecting middle- and low-income countries to adhere to all the agreements they come up with during these types of tamashas (shows) they put on annually. Though it is technologically possible for rich countries to achieve net-zero emission by 2050, the question is whether the evolution of their spirituality is anywhere near where it needs to be in order to make widespread changes in policy and investment across many sectors of society with the commitment by governments, industry, and individual citizens. The first step in achieving such awareness perhaps is to realise that the biggest threat to the planet is not greenhouse gases or fossil fuel energy, but the selfishness of man who thinks he can separate himself from nature.

(The writer has served in the higher education sector as an academic over twenty years in the USA and fourteen years in Sri Lanka and he can be contacted at thilanh@gmail.com)