Colonialism Is Not Dead, it has Acquired A New Face 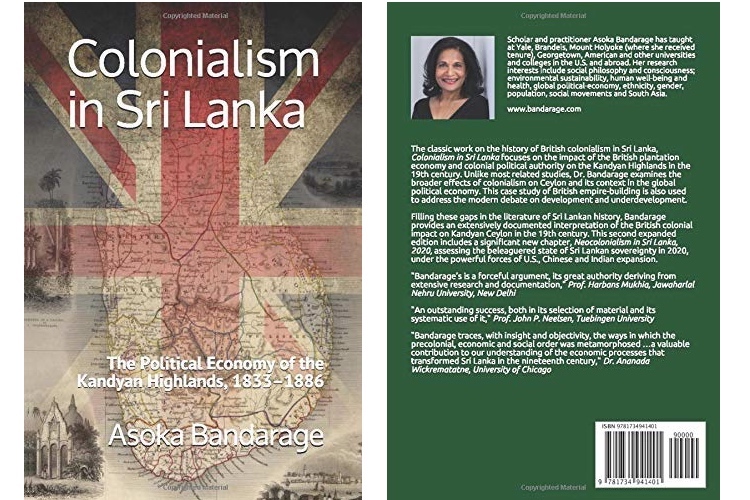 SYDNEY (IDN) – In the 19th century, European powers came to Asia and used gunboats and gunpowder along with doublespeak to intimidate and coerce local rulers to accede their land for the European mercantile elites to establish plantations.

The second edition of the book launched on September 24 in Colombo, includes a lengthy new chapter to warn her homeland how Sri Lanka’s strategic location could trigger a new wave of 21st-century colonialism that would use economic coercion, political pressure via organisations like the UN Human Rights Council to recolonize Sri Lanka. She also warns, that India, an icon of the anti-colonial struggle, may well be a player in this new colonialism in cohort with the United States.

Dr Badarage particularly cites a cunning United States move with a USD 480 million bribes to establish a digital land register that may result in traditional farming land in Sri Lanka been sold to foreigners. She argues the grant offered by the Millennium Challenge Corporation (MCC) to Sri Lanka may have a hidden agenda to grab land in the strategically located Indian Ocean island for the US to establish a military base there to fight their geopolitical battle with China.

The first edition focused on an important period of Britain’s empire-building where they used land grabbed from farming peasants in their colonies to establish plantations and build a global political economy based on basically slave labour.

The second edition, just released by Vimukthi Publishing includes a significant new chapter ‘Neo-Colonialism in Sri Lanka 2020’ that assess the threats to Sri Lanka’s sovereignty under the powerful forces of US, Chinese and Indian expansion in the region. It provides a comparison of two eras of globalization, both of which paid scant respect to the rights of people in small nations by the big global powers.

Dr Bandarage, who has a MA and PhD from Yale University has had a long academic career as a sociologist. She has taught at many universities including Yale, Brandeis, Georgetown and Mount Holyoke College where she received tenure. She has written many books and other publications that cover women’s issues, development and environmental topics from a sociological perspective.

Before the arrival of the British, Sri Lanka had an over 2000-year-old history of a rich rice-growing civilization and the rice farmer (goviya) occupied the highest rank in the Sinhalese caste system (govigama). The author points out that most western sociologists – and western-trained local counterparts – have misrepresented eastern agrarian sufficiency (subsistence) economics to backwardness and “how European colonialism has contributed to the economic stasis of nonwestern societies have been long neglected”, she argues. The book proceeds to expose this.

When the British defeated the Sri Lankan Kandyan kingdom in 1815, the author points out, they proceeded to dispossess the farming peasants of their land with the assistance of the Kandyan aristocrats. Thus, they introduced a system of forced labour that helped to consolidate the authority of the local aristocratic class over the cultivators (farmers). They used a headman drawn from the aristocratic class, and employed by the British, to “supervise the forced labour extraction on behalf of the colonial state”.

Beginning in 1833, the British introduced educational reforms to convince the natives of the superiority of the British race, so that they will accept the economic reforms – especially land reforms – they were planning to introduce to turn then Ceylon into a plantation economy based on, first coffee and later tea plantations. The reforms encouraged the sale of native land or grant of ‘crown land’ to private buyers. They thus set the basis for private property rights as opposed to traditional land access rights.

The basis of the pre-British traditional land rights in the Kandyan kingdom was based on the theory that any unoccupied or uncultivated land was theoretically ‘crown land’ belonging to the king. As land was not a commodity then, and plentifully available, the king did not prohibit cultivating on his land as long as it was not his ‘royal forest’.

“According to the customary law of the Kandyan society, peasant cultivators has users’ rights to the high lands surrounding their villages regardless of the overlordship of their village – royal or feudal” explains Dr Badarage. “This helped to guarantee a minimum subsistence for the peasants.” The colonial rulers, with the introduction of land ownership laws and taxation, overturned this customary communal village land system.

When resentful Sinhalese peasants refused to work in the plantations, the British even brought Tamil slave labour from South India. Thus, the rest of the book (1st edition chapters) draws a comprehensive picture of how the British plundered the land of the Kandyan peasants and turned Sri Lanka into a classic case of an ‘export-oriented’ economy closely tied to the British colonial economy.

Dr Bandarage notes that without the incorporation of the native aristocracy into the colonial venture and their support, “the colonial administration would have come to a standstill”.  It is in this context, that her second edition’s addition of a lengthy new chapter on what she dubs “colonialism 2020” makes interesting reading.

The MCC compact, which the US is currently trying hard to push through the throats of Sri Lankan leaders with a carrot worth USD 480 million, should make a good comparison with the British colonial policy of the 19th century. The MCC compact is fiercely opposed by the grassroots in Sri Lanka who voted overwhelmingly for President Gotabaya Rajapakse in November 2019 and in August 2020 at the general elections. Not signing the MCC agreement was a major election promise.

Dr Bandarage is not sure if this election promise could be kept by the Rajapakse regime as the small island nation is being squeezed from many corners. She questions whether the Easter Sunday Islamic terror attacks of 2019 is a part of the destabilization campaign waged by the US and aided by the Saudis to destabilize Sri Lanka with the aim of grabbing land to establish a US base in the island. Immediately following the Easter attacks, the Sri Lankan Prime Minister Ranil Wickremasinghe and President Maitripala Sirisena called for foreign military cooperation to fight the global Islamic threat.

She points out that military engagement with Sri Lanka has become even more urgent for the United States since the International Court of Justice ruled in February 2019 that US occupation of the Indian Ocean Chagos Islands, the site of the Diego Garcia military base, is illegal, and that the islands be handed back to Mauritius within six months.

From this context, the author discusses in detail the agenda involved in pushing through the MCC agreement on Sri Lanka.  It involves the regime change initiated in 2015 using western funded human rights and democracy NGOs, the co-sponsoring of a resolution at the UN Human Rights Council by Sri Lanka (along with the US and Europeans nations) in September 2015 followed by the resolution-imposed constitutional changes and setting up of war crimes tribunals where foreign judges were to sit in judgment, the MCC compact and the ACSA (Acquisition and Cross-Servicing Agreement) and SOFA (Status of Forces Agreement) agreements Sri Lanka were to sign to allow US forces to be stationed in Sri Lanka. All these came unstuck with the fall of the Sirisena-Wickremasinghe government in November 2019.

The MCC is a United States government corporation and their Board approved a five-year program for Sri Lanka in April 2019. But the government fell before it could be signed. Dr Badarage points out, that a report prepared for MCC by the Centre for International Development at Harvard University has made a case for the main plank of the MCC agreement to establish a digital land registry so that “adequate access to land” could be made possible to the private sector.

The report has pointed out that the state reportedly owns approximately 80 per cent of the land in the country and the process of acquiring rights to develop land is slow and unclear, resulting in an inability of the government to meet the demand for land needed for new private sector investment, including for export-oriented FDI. The goal of MCC Funding is to speed up land privatization and commoditization by providing investors, including foreign corporations, easy digital access to the land availability information.

“The MCC Compact brings to mind the early stage of capitalist development in Sri Lanka” notes Dr Bandarage. “There is a parallel between the MCC Compact and the UNHRC Resolution in that they both manipulate the Sri Lankan government to turn against itself, giving up its power and responsibilities over the most vital sectors of the state, the resources of the country and the rights of its people”. Thus, the struggle over the MCC Compact has parallels to the long history of popular resistance against colonial land policies in Sri Lanka, issues extensively discussed in earlier chapters

The added chapter also discusses the extensive Chinese involvement in Sri Lanka, as an arms supplier to defeat the Tamil Tiger terrorism, extensive investments in the island including the building of the Hambantota Port and the new Colombo Port City project, which is built on reclaimed land off the coast of Colombo.

On the other hand, India has been investing in Sri Lanka eyeing stakes in Sri Lankan oil storage facilities, port terminals and airports. A free trade agreement being negotiated between India and Sri Lanka is opposed by many sectors in the country such as trade unions and medical professions.

“While maintaining cordial relationships with the external powers, the principles of sovereignty, democracy and environmental sustainability must continue to be upheld” the author argues.

Dr Bandarage’s meticulously researched study on how the Kandyan hill country was transformed from a sufficiency economy to a plantation economy to serve British imperial designs in the 19th century, and how the same experience could be applied to understand the new colonial designs on the island nation by bigger powers such as the US, India and China, should be compulsory reading for those involved in contemporary debates on development and underdevelopment. [IDN-InDepthNews – 25 September 2020]