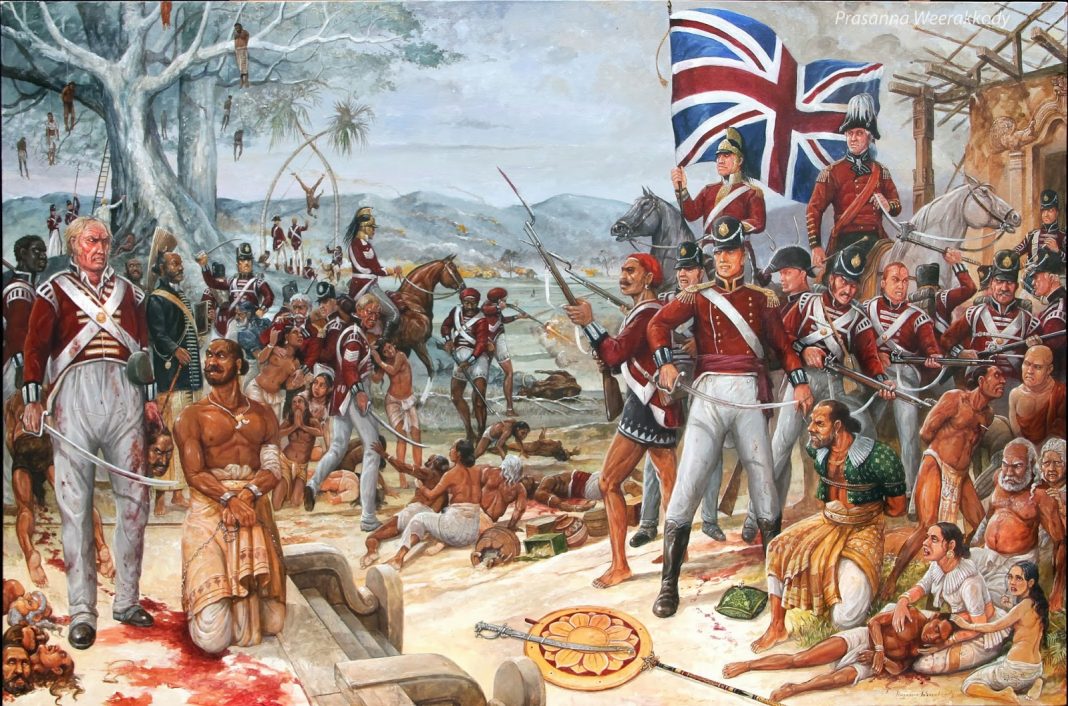 Last week, Sri Lanka celebrated 73 years since “Independence”. A misnomer really, since Dominion status afforded by the Soulbury constitution kept the Queen of England as the head of state and the Privy Council in London as the final court of appeal. Meanwhile, British troops were allowed to continue occupying Sri Lanka’s ports and airports.

But that’s another story. Colonialism was bad. Nowadays, most everyone will agree with that statement. The anglophile uncles praising British rule as a civilizing force that built roads and railways are a dying breed. Though their compradorism is now filtered through appeals to IMF induced stabilization, and UN enforced transitional justice.

The nieces and nephews of such anglophile uncles are more “woke”. Though even for them, conversations about colonialism are only triggered at inane inconveniences or symbolic offences, like when a white person makes a career out of selling Sri Lankan recipe books. Or when a plantation lineroom is turned into a hotel. Or, god forbid, when a brat from Colombo is denied a visa for an expensive holiday.

Not to say that these aren’t hurtful, but the effects of colonialism on the people and landscape of the country should be understood in ways that acknowledge their true gravity. Colonialism is evident in the fact that over 200 years since the Uva-Wellassa Rebellion, the Uva Province still has the highest number of people under the poverty line and the second highest poverty rate in the entire country.

At the time of Soulbury “independence”, Sri Lanka had one of the lowest ratios of cultivated land per person in Asia. Only around 20 percent of the country’s landmass was cultivated. Around 70 percent of this land was used for cash crops like tea, rubber and coconut, with only 30 percent remaining for paddy and vegetables. Around half the population was unemployed or under-employed.

The British imposition of a plantation economy in the Up-Country, following the slaughter of cattle, burning of paddy fields and villages, and mass murder of rebels, continues to shape the country’s economic destiny. Jungles in the heart of the wet zone were cleared for cash crops, while food producing regions in the dry zone were left abandoned.

The clearing of forest canopies in the Up-Country was so disastrous that even colonial officials noted how the country’s rivers ran red during the monsoon due to soil erosion. “Your island seems to be slowly washing away into the sea,” Director of the Royal Botanical Gardens in Kew, A.W. Hall warned in 1928.

S. A. Wickramasinghe, one of the first anti-colonial leaders to call for full independence, noted that unlike the rest of Southeast Asia, Sri Lanka’s main natural resources, her rivers and fertile soil, were so ravaged by colonialism that little room was left to maneuver in the quest for economic independence.

73 year after achieving dominion-hood, the legacy of colonialism lives and breathes. The full gravity of its implications are yet to be uncovered, studied, and reversed.