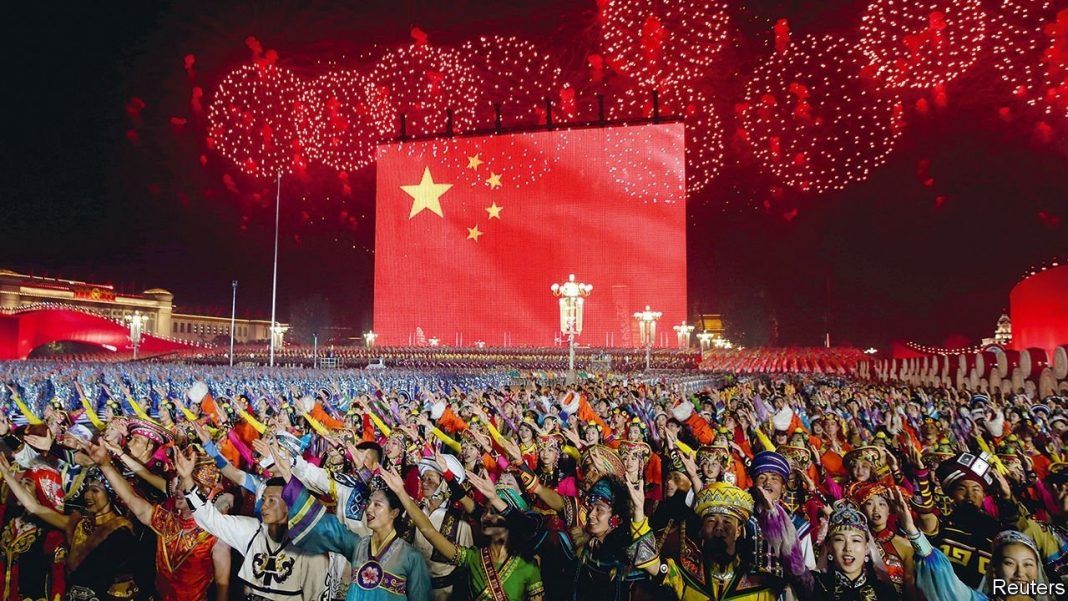 The Chinese Communist Party may not be on the list of the oldest political parties in the world but with 90million members it becomes the world’s largest political party. As the Chinese Communist Party celebrates its century, it can be proud of the unusual combination of political control, national & economic planning that has taken China on the path to progress & success. China is telling the world that Socialist Democracy is more successful than the Liberal Democracy the West practices. West was modern, China is modern, West boast of state of the art technology, China can match this any day, the West claims to have rich & riches – China has the world highest number of millionaires & billionaires! There is nothing much of significance that the West can claim superiority in.

The growth of China has been phenomenal. To comprehend this, people must be aware of what China was and what China is now. This is the pride that inspires and commits Chinese to take China to greater heights. China’s progress is attributed to the Chinese Communist Party, the decisions of the leaders, the meticulous planning, checks and balances & monitoring of its projects. China’s blueprint is nothing to be envied but to be applauded.

China’s journey has been no bed of roses. China was under imperial rule for 6000 years which ended only in 1912 with the ousting of the Qing Dynasty. The Chinese Communist Party was formed on 21 July 1921 in Shanghai co-founded by Chen Duxiu and Li Dazhao. Shanghai is today, China’s most populous city & engine of its economy. The People’s Republic of China was founded on 1 October 1949 under the leadership of Mao Zedong.

China has experienced its share of misfortunes – millions of deaths from hunger, feudal imperial system, devastation to crops & livelihoods of farmers. Like all countries, China too experienced its ups and down phases but has come out like a true dragon. But with each unpleasant experience, China has found alternative workable solutions. There is nothing stopping other countries from doing the same as per their benchmarks.

There is much debate & obsession over China being led by 1 political party. The Western countries of the world are primarily where they are because of the lead they hold following colonization and plundering of resources and materials from the countries they invaded & occupied & the cruel nuances they left behind to ensure the people of the former colonies remained plagued with conflicts. Not stopping there, every international system in place originated from their pen including clauses to their advantage. With time however, globalization meant having to draw the former colonies into the system. Now we see the tables turning.

While the angst over China’s one party system remains contentious, alternatively what has been gaga about the multiparty system? The US House of Representatives has been led 25 times by Republicans and 35 times by Democrats throughout the 120 years of its existence. Is life so honky dory for 328m Americans? Are they all happy with the political system? With all the supposed ‘freedoms’ ‘rights’ US claims to provide, are the American people happy and are their needs all provided? The records don’t paint a pretty picture. 34million Americans live in poverty, 44million Americans survive on food stamps, 1million Americans are homeless & live on the streets and inspite of all the freedoms and rights 2.3million are in US prisons.  In contrast, China has taken 800million Chinese out of poverty.

Watch How China Lifted Millions Of People Out Of Poverty

How did China lift hundreds of millions of people out of poverty?

China Is Quietly Becoming The New Superpower of the World

The US calls itself the land where dreams come true and boasts 664 billionaires, but then China has 1058 billionaires.  China has even topped US in luxury car usage. While the US Govt and US media has problems with China, US & other multinational corporations are happy to operate in China. McDonalds, Starbucks, Pizza Hut, Taco Bell, AT&T, GE, Walmart, Target while KFC sells more chicken in China than in US. McDonalds has 3000 outlets across China while Starbucks has 4100 stores in 160 Chinese cities! Apple, Dell, Texas Instruments, Trader Joes, Home Depot, Nike, Gucci, Abercrombie & Fitch all operate in China.

Annually 145million tourists who visit China are captivated by the sleek airports & magnificent infrastructure and return with a totally new outlook about China. China is nowhere near to what the Western governments & their media project China to be.

The Most Interesting Innovations Already in China

Shocked by China’s super engineering! I don’t know how to look at this pier

China’s rise from bicycles to bullet trains is nothing that should envy any foreign nation or foreign government.  China has a million bridges and 49 of the world’s tallest skyscrapers!

Chinese mayors are motivated too as the Chinese government rewards Government officials for the improvements initiated.

How China Turned the Desert into Green Forests

China’s fastest train (Fuxing) plies from Beijing to Shanghai at 350kph while the fastest train in US travels at 214kph between Washington & Boston. China has 22,000 miles of high-speed rail lines; the United States has none. China opened its first freeway in 1998.  By the end of 2019 it had built 93,000 miles while the United States had under 67,000.

China has the world’s strongest military force – 406 ships against 202 of US – US however has the highest military budget spending $732billion per year against China’s $261billion annual.

As of 31 March 2021, US debt was $28.1trillion of which $21trillion or 78% was public taxpayers. US owes China $1.1trillion. Will any US Government take responsibility for placing the taxpayer with $21trillion debt?

7billion people will have 7billion aspirations and no government can cater to every citizen’s demands. But a government shoulders the responsibility of a nation & its people. That government whatever its vision (capitalist or communist) is duty-bound to provide for the basic needs. In looking at the West’s liberal capitalist system and multi-party system as against the one-party system in China and the colossal development & with it the corresponding upliftment to the lives of the Chinese – this is where the world has to give a thumbs up to China without envy.  It was Zhou Enlai who declared that China would modernize along 4 main pillars – Science & Technology, Agriculture, Industry & National Defense. From China’s entry to the World Trade Organization in 2001 in 21 years China has been risen cautiously.

From a country that could hardly feed its people – China is today an economic giant.

The Challenge the Chinese Communist Party faces is to maintain its Communist framework while interconnecting China’s people to the global economy & China’s role in it. Without a doubt the Chinese people feel a strong sense of pride in its country and the developments and achievements made by its government.

That achievement is nothing that any capitalist nation can envy or despise. China’s growth and development is testimony to what countries can achieve with planning, monitored privatization without corrupt systems which is what ails most countries across the world. The Communist Party of China can also feel proud of the strides it has taken in the realm of international politics. Hosting the Olympics allowed China to show off to the world the strides taken.

The Most Beautiful Places in China

Against this backdrop, the world is consistently criticizing China. If they cannot find fault with China’s human rights, they find fault in China’s freedom of speech or they will hen peck regarding China’s crackdown on dissidents. If these do not shirk China, they will create new ones. While China will deal with each in its own way, there are certainly areas that China’s Communist Party can improve upon. Internally too China’s Communist Party must deal with the internal issues before these become hijacked by China’s enemies to attack China.

While development, it also entails a burden on the environment & nature. China should be mindful of ensuring its development co-exists coherently with nature & the environment. China’ Communist Party must generate its own powerful communication system to immediately proactively deal with the negatives created to undermine and alter people’s opinion of China.

The argument that GDP figures does not erase social issues that exist is true of all countries. China is no different. But the difference lies in the systematic approach China ventures to solve them. Though these solutions are unlikely to be acceptable to liberal & western notions, the Western systems are nothing they can boast superiority.

The Communist Party of China must maintain its brand name adjusting only to the internal environment & not please the external world. It is in showcasing CCP as an alternative success story to the political systems of western countries, that China can show the world its superior status in all forms.