Canada slips and slides on genocide 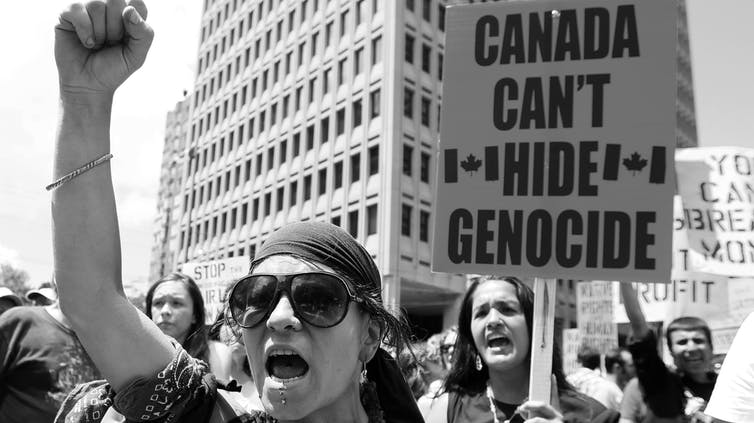 In an ideal world, or a flat world if you will (where liberty, equality and fraternity are affirmed in word and deed at every turn), it would be lovely for the people of one country to care about those of another. Well, even if it’s not entirely flat, it wouldn’t be out of order for one country to be concerned about the hiccups of another. Provided of course that a) hiccups weren’t imagined on account of ignorance or conjured up for reasons of political expediency, and b) the concerned were not themselves hiccupping.

Alright, our earth is not flat. Neither is it mostly flat except for a few wrinkles here and there. It is slanted in many ways. There are thugs and victims. Globally and locally, wherever you may be whichever locality you are concerned with. Some have weapons of mass destruction and therefore they can bomb countries into the Middle Ages, sometimes on the pretext that the countries they discharge their largesse upon themselves have similar arsenal at their disposal. Yes, that’s the USA and the Iraq of Saddam Hussein. Some have bucks, some don’t. In short, structures of inequality, structures of exploitation, and structures of subjugation. The subjugator and the subjugated. Some control the media and others victims of spin. Yes, our earth is not flat.

The earth is not flat but that’s ok. Even uneven countries can talk about the unevenness of other countries. It’s like saying ‘we have our own tumors, but that shouldn’t stop us from raising concerns about the warts you carry.’ Of course, in the political economy of unevenness, typically, certain tumors are not talked of and zits are called warts or worse. Mountains are made of molehills and that’s how ‘status of the world and countries within it’ is obtained; manufactured rather.

The earth is not flat, neither Sri Lanka nor Canada. However, Sri Lanka is not talking about Canadian unevenness whereas Canada is imagining unevenness in Sri Lanka that has nothing to do with geographical factors.

In Ontario, for example, they have legislated a bill about Sri Lanka. It’s about declaring an annual genocide education week which ends on the day that Sri Lankan security forces completed the elimination of the LTTE military apparatus. Those who had alternate outcome preferences, including those who used the conflict to buttress cases for residency (most of whom, Canada knows, actually visited Sri Lanka even during the height of the hostilities!), obviously have an axe to grind, understood. Cooking up tall tales is probably second nature, understood. Canada, a de facto client state of the USA and the UK when it comes to global affairs, has to go along with the narratives written and pushed by those countries, understood.

Now, the claims are outlandish. They have got an exact number of people killed ‘in the last days of the conflict’: 146,679, substantiation? Well, nothing there. Random numbers plucked from the air as is the norm for tale-spinners. Conditions of starvation, they say, were inflicted on Tamil civilians. Well, we know for a fact (the UN knows, so does the ICRC) that the LTTE pilfered rations. We know that the LTTE held hundreds of thousands of Tamil civilians hostage (that’s the ‘human shield’). We know that the LTTE shot and killed those who tried to escape. So if people did starve, and some may have, certainly, then the charges should be levelled at the LTTE, the TNA (the political voice of the LTTE) and the various groups in North America and Europe who acted as mouthpieces for the LTTE, some of whom were the movers and shakers of this piece of legislation.

The earth is not flat, neither Sri Lanka nor Canada. However Sri Lanka is not talking about Canadian unevenness whereas Canada is imagining unevenness in Sri Lanka that has nothing to do with geographical factors

Tamil children, it is claimed, were taken from their homes. Yes, this is true. The LTTE kidnapped children. Forcible conscription of kids was part of their 30 year story. Some 500 plus children thus captured and trained to kill were reunited with their families almost immediately after the LTTE was vanquished. Yes, the Government of Sri Lanka facilitated that reunion. And get this: even the UNHRC, clearly no friend of Sri Lanka, had to concede that the events leading up to the final denouement in Vellimullivaikkal did not amount to genocide.

Now here are some facts which those in Canada objecting to this move have made public:
a) According to the most recent (2018) and most comprehensive study by the British House of Lords led by Lord Naseby, the death toll in the last Eelam war is 5000-7000 and NOT 146,679.

b) If 147,000 were killed by shelling and bombing, one may expect 2 to 3 times that many injured, i.e., 300,000 to 459,000 injured. Instead, only about 18,000 injured were found, corresponding to about 7,200 deaths, consistent with Lord Naseby’s findings and the findings of academic researchers who have studied the death toll.
c) No mass graves corresponding to a death of 146,000 within a few months have been found, even though the Sri Lankan Northern provincial Council led by C.V. Wigneswaran had been very interested in locating such graves to further his allegation of a
Tamil genocide.

d) The leader of the Tamil United Liberation Front (TULF), V. Anandasangari had stated at the 2008 annual convention of the TULF that the LTTE engaged in mass killings of its injured cadre as they were considered a liability to the LTTE, and as a way of indicting the Sri Lankan Army. In fact, the movie footage from such killings was used to make the Channel-4 ‘documentaries’ claiming that the “No Fire Zones” were “killing fields” in Sri Lanka. Those movies have been analyzed and refuted in the study “Corrupted Journalism: Channel 4 and Sri Lanka”.

e) The Tamil journalist D. B. S. Jeyaraj, Tamil writer Sebastian Rasalingam, as well as the Jaffna University Teachers for Human Rights have stated that while the army took steps to minimise civilian casualties, the LTTE sought to maximise civilian casualties to claim a humanitarian disaster and demand international intervention. US ambassadors serving in Sri Lanka at the time confirmed this.

f) The claim of not supplying food to civilians held captive by the LTTE is based on an error in the Darusman Report where the food supplied by the World Food Program (WFP) had not been counted in. It is shown that the WFP, the ICRC, and the Sri Lankan government provided about four times the required amount of food.

Wars are not pretty; the story therefore is not pretty. The LTTE had much to do with the ugliness, but so too the various governments. That said, there is truth and embellishment. There is molehill and there’s mountain. Warts and tumors. A spherical world and a flat earth theory. True concern and ridiculous politicking at odds with the notion of ‘civilized engagement.’ There’s literature if you want to know the truth. If you don’t, it won’t matter. That’s the case here, obviously.

So much for Sri Lanka’s alleged communal tumors. Fiction. Imagination. Quite creative, really. Not so the Canadian warts. Sorry, tumors. It is mind boggling, really. And we are not talking of ‘gifting’ blankets infected with diseases to indigenous peoples. We are talking of kidnapping and children being forced into ‘special schools’. We are talking of deliberate neglect. Well, it’s actually wrongful deaths (if you want to be cute about the terms) of children. Mass graves too. There’s evidence, as opposed to tall stories spun by unreliable sources.

The writer can be reached on: malindasenevi@gmail.com.