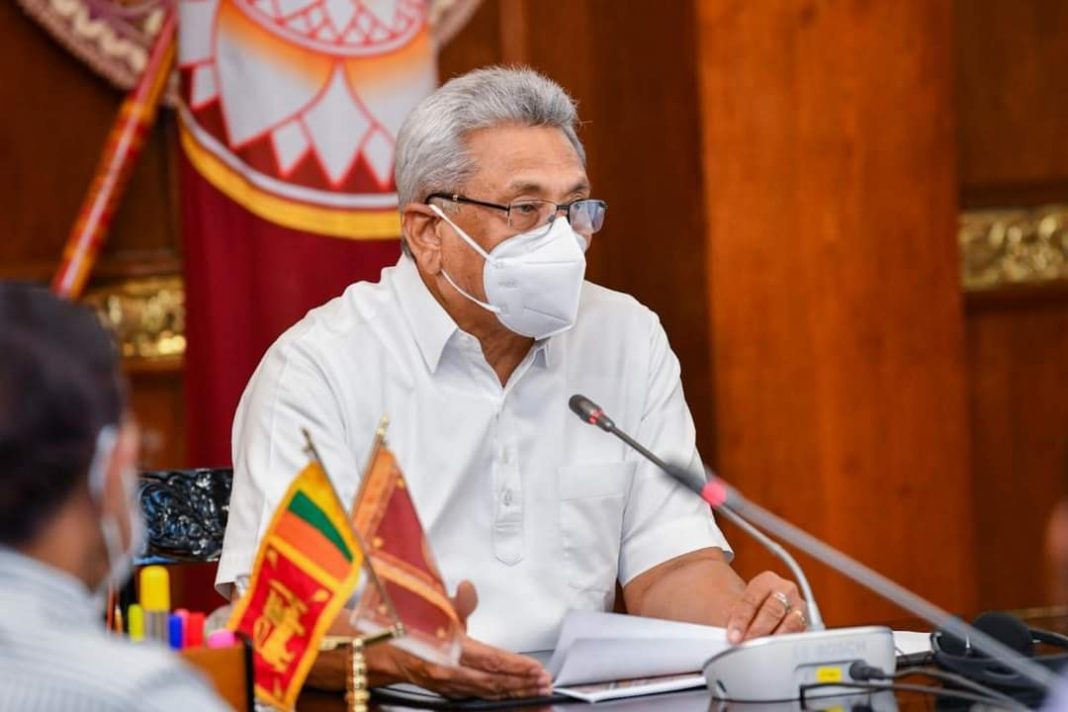 Few in the present government seem to understand that they are holding in their hands the hopelessly misshapen product – a generally weakened Sri Lankan state, that is, a country hamstrung in terms of its national security, economy, its internal cohesion, and external relations – left by the yahapalanaya molestation of the nation (2015-19), a critical situation compounded by the havoc caused by the extraneous hydra headed monster of the deadly Covid-19 pandemic with its protean forms.

The deformed baby is still awaiting emergency corrective surgery. But unfortunately, the handful of surgeons led by their determined head are being surrounded and choked by a swarm of quack surgeons, from whose concerns nothing seems to be further than what should actually be done to reassure the people, including particularly the sensible 6.9 million+ voters who reposed their trust in that head surgeon.

The administration must also similarly reassure the nation’s foremost spiritual leaders: the Maha Nayakes, the Cardinal, the Kurukkals, and the Moulavis, who together directly or indirectly encouraged the voters to elect him. The people never thought that the government would so soon come to be dominated by a set of politicians who believe that their survival depends on pleasing the minority of anti-majority extremists in different forms, and agents of Western hegemonic powers, in alliance with them, each directed by the narrowly nationalistic policies of their respective countries; willfully oblivious of or crassly indifferent to the real issues that Sri Lankans are struggling with, about which, in any case, they are least concerned in the best as well as the worst of times.

The Opposition SJB and the JVP elements have begun crawling, nay cruising, out of the woodwork, on the pretext of protesting against the temporary hardships caused by the well meant ban on the import of chemical fertilizers, and the proposed quite sensible Kotelawala Defence University Bill (which, if necessary, could be improved through meaningful discussion). What use are these purblind protests’ demonstrations? Their conduct is atrocious, insensitive, shocking, particularly in view of the generally destabilized state of the country suggested above, and the devastating disruptions to the general economy caused by the pandemic, and the deleterious environmental consequences and financial losses resulting from a dangerous cargo laden Singapore registered ship, mysteriously catching fire in the vicinity of both the eastern and western seaboards of the island. Besides, by behaving like perfect imbeciles, trade union activists are merely adding to the burdens of the health sector and security forces personnel, who are making such great sacrifices in the name of the country, uncomplainingly, in battling the Covid-19 pandemic. Their sacrifices and difficulties are invariably shared by their families, especially children. And what about the general populace who are undergoing such privations in their day-to-day life, finding it so hard to make both ends meet, but hardly ever complain as they understand the problems that the country is facing as a whole.

Some farmers complain they have a problem because of the lack of chemical fertilizers and pesticides, to which they have been accustomed over the past half a century. The claims of those farmers who are saying that their cultivations have been severely affected by the single cause of the alleged non-availability of chemical fertilizers are hard to believe. Previously cultivated land on which fertilizers had been used, cannot be expected to lose its fertility completely after one season. It should not be a problem to forgo the usual application of fertilizers temporarily, allowing the switch over to organic fertilizers next term. The farmers are probably not making truthful claims, at the behest of union activists. Anyway, according to agriculture minister Mahindananda Aluthgamage, there cannot be such a serious shortage, as all the chemical fertilizers required for the current season have been issued to the authorised outlets. Then, the farmers must be making false complaints, egged on by anti-government trade unionists and politicians. Or, if there’s a real scarcity of fertilizers, it must be due to hoarding. Why can’t the government go after the miscreants, if that is the case, and confiscate the hoarded fertilizers and distribute them among the farmers at a suitable price or just free of charge?

To my pleasant surprise, the answer to this question came from minister Aluthgamage. As Hiru TV News reported (9:55 PM/ July 14, 2021) he and his deputy state minister Sashindra Rajapaksa made surprise visits to the depots of two private fertilizer companies at Peliyagoda and Kelaniya, and found large stocks of fertilizers hoarded. Though these companies had the capacity to issue 700-750 metric tonnes of fertilizers a day, they issued hardly a half of that amount, helping create an artificial scarcity. The minister immediately requested them to issue the fertilizers forthwith. He ordered his officials to get the state fertilizer companies to buy those stocks at a suitable price and distribute them among the cultivators, in the event of the companies failing to meet his request. Addressing a meeting at the Hector Kobbekaduwa Agrarian Research and Training Institute (Wijerama Mawatha, Colombo), Aluthgamage said that the purpose of deliberately withholding fertilizer supplies and inciting farmers to agitate against artificial shortages, was to sabotage the success of the organic fertilizer substitution project of the government, which will be launched in earnest from the next season. (Anyone can see a link between politicians and private fertilizer companies behind these agitations.- rrw) There is money and business behind the protests, the minister said. The particular piece of news ended with a prominent JVP activist demanding that the government give the farmers their fertilizers and pesticides, and pay compensation for the damage already done by the alleged shortages!

Incidentally, something akin to this context is where it is said that the rice prices are controlled by a couple of big rice mill owners, some of them politicians connected with the present government. People would like the government to resort to some stern action — like taking over these mills and their hidden rice stocks, and handing over, to a state body like the Paddy Marketing Board, the job of husking the paddy and distributing the rice on a wholesale basis. It is up to the government to implement a proposal like this after appropriately considering its feasibility. That this is not happening shows the power that the private sector is wielding, not only over paddy cultivation and rice distribution, but on the policy makers. The 6.9 million voters and the spiritual leaders are waiting for the rulers to bring these mafiosi under control. They are still hopeful that the President will succeed even in other spheres of governance where dealing often replaces leading.

Meanwhile, some teacher unions are also reported to be on strike, which means that their members have stopped online teaching. Online instruction is expected to provide some help for the unexpectedly housebound children of the country. They are in that predicament as a result of the long interruption caused to the functioning of normal face-to-face teaching in schools by the Covid associated restrictions on movement. It is by no means an adequate stopgap solution for them, because, among other snags, internet accessibility is problematic in most areas. But teachers are still being paid their salaries. It may be true that there are long standing pay scale anomalies, and other job related issues that need to be addressed. But teachers should understand that this is not the time for urging the government to provide relief. Isn’t it their duty to help the authorities to put an end to the Covid crisis first?

However, according to media reports, their main complaint is against the Kotelawala Defence University Bill. They want it withdrawn, arguing that its passage will pave the way for privatising education, putting an effective end to free education. (The JVP has been flogging this dead horse for decades; it looks like they are not intelligent or creative enough to think of a better cause célèbre to ensure their political survival! I am sorry to see that minister Wimal Weerawansa also opposes the KDU Bill. Probably, he expects only to incorporate certain amendments in it before passing it. Weerawansa is one of the architects of the victory of the SLPP, and one of the very few best performing cabinet ministers. A Gotabaya government without him and Gammanpila is inconceivable.)

That stupid demand (i.e., to withdraw the KDU Bill) alone invalidates their struggle. Don’t they know that even in rural areas paid tuition supplements school instruction at every level? Don’t many of these teacher union members have a stake in that as an extra source of income? Are international schools providers of free education? How many of them are there? What are their tuition fees in terms of foreign exchange? Don’t large numbers of students go abroad every year to study not only medicine and engineering, which local universities don’t have enough capacity to make available to all the students who qualify to study in them, but also subjects such as accountancy that can be learnt at the highest level within the country? Not all the parents who send their children to study abroad belong to the ‘rich’ category. Private education side by side with free state education has come to stay and has become a current necessity. Private medical colleges are essential. There should not be any argument about that. Most ordinary people now know this. They don’t approve of the politically motivated disruptive activities of trade unionists.

These purblind politicking farmer and teacher union leaders have already earned a great deal of pent up public anger. It is bound to explode sooner or later. But the government has come to their aid, so that their irresponsible, mischievous conduct has got a semblance of decency. How? By forcibly, most likely unlawfully, quarantining them at the expense of the tax money paid by the already suffering general public, whom these wrong doers are holding hostage. That is not a good way of deterring their irresponsible behaviour or just punishing them for it. Minister Sarath Weerasekera, whom I admire as much as I admire Weerawansa and Gammanpila, is a loyal supporter of the President, and he means business. I trust both of them (GR and SW) equally. But I am sure that the President will never resort to or approve of ‘bull in a china shop’ strategies, which he can’t later defend!