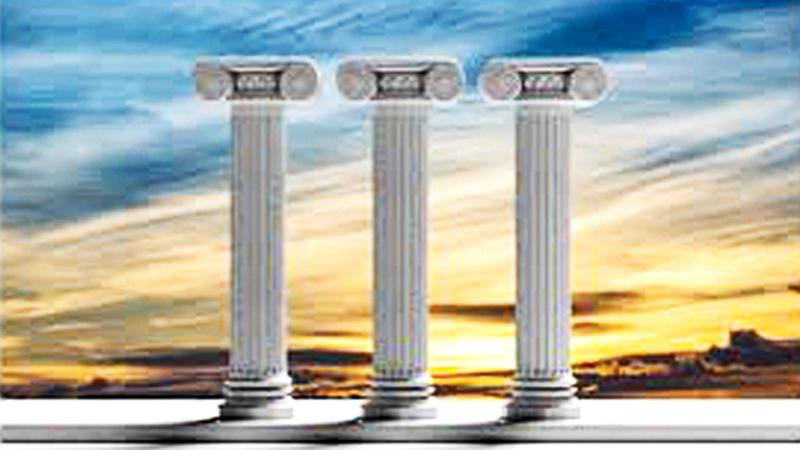 Karu Jayasuriya’s comments about the pillars of democracy being assailed by the present government has a plantation Raj era flavour to it. Failing planters were used to oppressing labour and the minor staff in the tea estates in that waning era of the post-independence plantation economy.

Justice was not their strong suit. They rode roughshod over the labour force, and meted out unjust punishment, physically and verbally abusing hapless labourers.

But at high tea, or over a pint of pale ale they boasted to anyone they accosted about which College they hailed from, and how honour and justice was such an integral part of their old school upbringing. Pukka Sahibs liked to do this. They swore that only they knew the value of honour and integrity, and all about being the paragons of virtue.

Karu Jayasuriya is an anachronism. He should have been a periya dorai in a sprawling, decadent plantation in that age of plantation bluster. By day he would have been able to kick the coolie and by night he could have rambled on about what a pukka, virtuous shahib he was, praise be to God.

Karu Jayasuriya, once as Power and Energy Minister was called kaluwara Jayasuriya, the prince of darkness who presided over Parliament as the most blatantly partisan Speaker, in the most sickeningly persecution-minded era, regularly robbing the Opposition of allotted speaking time, installing a rump group as the official Opposition and praising a large flock of defeated MPs who were smuggled into Parliament by his then political camp, as National List MPs. This Karu Jayasuriya is now missing the pillars of democracy.

Wonders will never cease. Karu Jayasiriya is speaking about the structural aspects of democracy under the current dispensation, but a structure exists. Personally, he may not like the shape and form of that framework, but democracy is built these days around a set of rules that exist as part of the country’s Constitution, and other laws.

How’s that for pillars of democracy? When this writer asked the then Speaker about the defeated candidates who were smuggled into Parliament on the national list, at an event held at former MP Rajiva Wijesinha’s residence, Karu Jayasuriya had a beaming smile and said that’s quite alright. He looked as if he had wolfed down one of those pillars of democracy for lunch.

‘Sri Lankan citizens are intelligent and they are awake. In the past, many rulers in this country thought that they had a free reign to do anything while the people simply accepted their every move,’ he had said, referring apparently to what he says are the Gotabaya Rajapaksa government’s attempts at demolishing the pillars of democracy.

He really must have been taking a hard look at himself in the mirror when he said that. Many rulers in this country thought that they had a free reign to do anything?

Absolutely. There were Speakers who functioned from under the shirt pocket of their Prime Minister and his government.

Jayasuriya thought Parliament was his backyard, where he could appoint the Opposition Leader at whim, use the voice vote at his fancy, and generally do as he pleases by deciding on who should speak and not speak on the basis of whether he liked their faces or not.

He was totally right about one other thing. Sri Lankan citizens were intelligent and they were awake. They reduced Mr. Jayasuriya’s then governing party to one seat in Parliament. So there.

In addition to holding the record as the most blatantly partisan Speaker any Sri Lankan Parliament has ever seen, Jayasuriya now will hold the record for the thickest skin possessed by any politician out of power. He’d positively be the envy of any rhinoceros.

Imagine having the gumption to say all this about the pillars of democracy after crudely prostituting Parliament to achieve his own political ends, and then imagine ending all that up by saying the people are awake, as if the people didn’t just a few months ago, have him and his party drawn and quartered — and hung out to dry?

What a guy. Karu and his band of friends of the thick skin society occupy what can be called the space of alternate reality. They think they have some credibility left. They also think they can have another throw at the dice and succeed. That’s very optimistic.

As for the alternate reality they inhabit, it can be best encapsulated by the idea that these people thought they would serve for 17 years. That was the vocalised claim of all UNPers. The SLFP was in power from 1994 until 2015. The JR-Premadasa UNP was in power for 17 years. The vision as projected from Karu and his men’s alternate reality was that the UNP will be in power for 17 years with Wickremesinghe as leader, and Karu as the Speaker. Being optimistic is one thing — but being totally delusional is entirely something else.

There were two leaders of this country who messed it up substantially for future generations, and they were J R Jayewardene and Felix Dias Bandaranaike.

At least the readers will know I’m not being partisan in making that assessment, because these two gentlemen were from two opposite ends of the political spectrum — one a UNPer, and the other, a dyed in wool left of centre SLFPer.

FDB as Felix was never the leader of the country but as a powerful Minister he did enough damage. J R Jayewardene corrupted an entire system with his undated resignation letters etc and utterly cynical attitude towards good governance, despite some achievements in areas of infrastructure and economic development.

But these two governments — that of JRJ and the one heavily influenced by FDB — caused damage by acts of commission. Both were proactively nasty.

Chandrika Kumaratunge on the other hand was relatively benign. Her tenure was marked by her omissions — the inability to get anything done, either good or bad — rather than her acts of commission.

But the 2015 UNP government of which Karu Jayasuriya was a key actor, neutral Speaker though he was supposed to be, was a disaster in terms of both commission and omission. They went the whole hog. It was a do-nothing government as far as economy and development were concerned. But it was also an inflictor of damage by commission.

In the area of governance, as detailed above, they believed it’s their God given right to do anything they please, law and convention be damned.

Additionally, by deliberately undermining the Sinhala Buddhist majority, so much harm was caused to the social fabric in terms of driving a wedge between majority and minority communities.

The cohabitation gridlock between executive and legislative branches — or between the President and the Premier to be more accurate — caused paralysis in governance, and set the country back by a good ten years.

Never mind the pillars, they brought down the whole edifice. By the way, Jayasuriya says there were proper elections in his time, forgetting that his party came to power in a proper election held prior to that.

But the good news is that, with Karu Jayasuriya’s kind of credibility, other than people wondering how he is managing to keep a straight face when spewing this garbage, his statements won’t create so much as a blip on the radar.